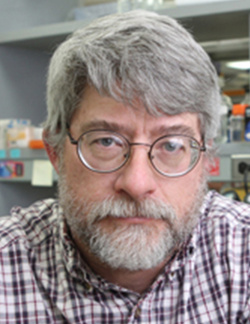 My lab’s primary area of interest in the lab to learn how cells communicate with one another during development. One group of signaling molecules that we study are the TGF-ß family of secreted polypeptides. This is the largest family of secreted "growth" factors with 33 members in vertebrates including TGF-ßs, Activin/Inhibins and bone morphogenetic proteins (BMPs). These signaling factors influence a wide variety of cellular processes including tissue growth, differentiation, and death as well as metabolic and synaptic homeostasis. My lab is using genetic, molecular, biochemical and computational methods to analyze of these factors influence these important biological processes. Three recent areas of interest are to 1) determine the mechanisms responsible for trafficking of TGF-ß receptors to different locations in the cell 2) to identify targets of TGF-ß signaling that regulate cytoskeletal dynamics in developing tissues and 3) identify targets of TGF-ß signaling that regulate metabolic aspects of development and sensitivities to different nutrient sources.

The second general area of interest in the lab is to understand how timing of developmental processes is regulated. In many organisms systemically delivered steroid hormones modulate developmental transitions, including metamorphosis in insects and puberty in humans. We wish to identify the neuroendocrine signals that trigger steroid production and release in the fruit fly and we are also interested in characterizing the cell biology of steroid production and secretion in endocrine cells, including determining how biosynthetic intermediates are trafficked between the mitochondria and the ER and how steroids are exported and imported into tissues.