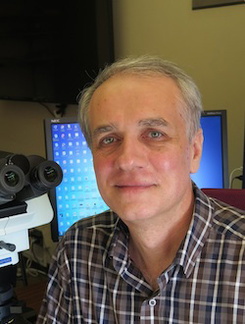 More recently, Racila’s research focus shifted to the complement cascade and the role of mutations in complement genes to treatment response. Complement is a part of the immune system that helps or complements the ability of antibodies to kill the tumor cells, or phagocytic cells to remove pathogens from the body. The complement system, which is part of the innate immune system, consists of a number of complex proteins that circulate in the blood. Racila and his colleagues have found that single nucleotide polymorphisms in certain complement genes such as C1q are correlated with treatment response and metastasis in breast cancer and lymphoma. C1q plays a role in angiogenesis and also binds to apoptotic bodies from dying cells, including tumor cells, coating these bodies to facilitate engulfment and removal by macrophages to prevent an autoimmune response. In cancer, an autoimmune response against tumor cells is desirable, yet tumor cells employ mechanisms for suppressing the immune cell response. Racila found that lower levels of C1q are actually associated with less propensity to develop metastatic disease in breast carcinoma, possibly because more apoptotic bodies from tumor cells escape engulfment and become available for processing and antigen presentation, therefore eliciting a stronger immune response. Bettering understanding of the complement system, a more primitive ancestor of cellular and humoral immunity, can shed light on possible mechanisms for strengthening the host response to cancer.

Racila and his fellow researchers also usednext-generation DNA sequencing (NGS) technology to investigate the molecular heterogeneity of malignant mesothelioma.They looked at the overall number and type of nucleotide substitutions as well as chromosome copy number variation of various genes. They hypothesized that the mutational frequency differences observed between the epithelioid, sarcomatoid and biphasic types of malignant mesothelioma may affect tumor behavior, response to treatment and clinical outcome. Also, identification of a method to reliably differentiate between primary and metastatic squamous cell carcinoma to the lung has direct implications for the therapy and prognosis of these tumors. Currently, this differentiation cannot be done by the use of morphologic features alone. Racila and his colleagues found that these lung neoplasms can be distinguished by the specific mutational signatures they carry and an algorithm can be developed that will assist pathologists in identifying the origin of these lung tumors.