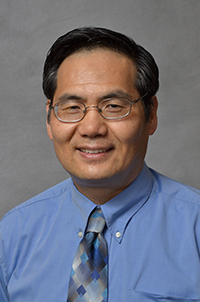 Dr. Li is an anatomic and clinical pathologist and a member of the Division of Molecular Pathology and Genomics who studies cardiovascular, pulmonary, head and neck, and genitourinary pathologies. Most of his funded research is focused on congestive heart failure, a major health problem in developed countries and incidence increases as the population ages.

The Li laboratory found that mammalian heart muscle cells rapidly switched from proliferation to hypertrophy in the neonatal period while heart muscle cells in other vertebrates like chicken continue to proliferate even into adulthood. Using animal models and explanted failing human hearts, Li and his colleagues showed that Wnt/beta-catenin signaling, an important developmental pathway, is upregulated during heart failure and contributes to dysfunctional fibrotic growth. This suggests that Wnt/beta-catenin signaling pathway plays a key role in the transition from heart hypertrophy to failure and can be explored as a therapeutic target. Investigation of beta-catenin signaling targets in heart muscle cells may reveal key molecules involved in the regulation of cardiac muscle cell shape, which in turn could serve as targets for future therapeutic intervention. Epigenetic changes in heart cells during the neonatal period also may be involved in transitional heart cell regulation and behavior.

Ischemic heart disease is the leading causes of heart failure. One of the leading impediments for cardiac repair and recovery from ischemic injury is that the main functional cells, cardiomyocytes, lack significant regenerative potential. Li’s laboratory is exploring the behavior of cardiomyocytes beginning in early embryonic development. In experimental rats, cardiomyocytes stop dividing soon after birth but the cell nucleus does divide at least once, making the cardiomyocytes bi-nucleated or multi-nucleated in adults. Human cardiomyocytes also can have a single nucleus or multiple nuclei. Because adult cardiomyocytes do not divide under normal conditions, efforts to induce them to enter the cell cycle, divide, and regenerate tissue are unlikely to succeed because they are not equipped with cell cycle machinery. Thus they lack the regenerative potential that cardiac stem cells or progenitor cells possess. To further complicate matters, the heart environment may not be conducive to converting cardiac stem cells into cardiomyocytes. Following cardiac injury the primary cells involved in tissue repair are fibroblasts and their precursors, not cardiomyocytes, which severely limits the ability of the heart to regenerate tissue on its own.

In Li’s view, regenerative cells need to be introduced and then integrated into cardiac tissue for clinically effective repair. These regenerative cells are likely to be derived from induced pluripotent stem cells or iPS cells, which are in essence mature cells that are reprogrammed genetically to behave like versatile, pluripotent cells capable of differentiating into cardiomyocytes. Even then, whether regenerative cells introduced to the site of cardiac injury are able to flourish or even survive long enough to functionally integrate and effect repair in a damaged area will be a challenge because of the heart’s unwelcoming environment after injury.

By investigating the molecular mechanisms that regulate cardiomyocytes from embryonic development through the neonatal transition to cellular maturity, Li’s laboratory hopes to shed light on how cardiac tissue regeneration can be achieved and full cardiac function restored in patients suffering from heart failure.