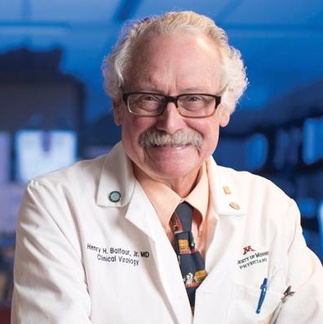 Dr. Balfour is a professor of laboratory medicine and pathology and also pediatrics. He is founder of the Clinical Virology Laboratory and is principal investigator of its International Center for Antiviral Research and Epidemiology. Balfour has a long-standing research interest in viruses and human disease and preventative vaccines. His current research focus is on the pathobiology of Epstein-Barr virus (EBV) and the development of an EBV vaccine.  Balfour is principal investigator of the Epstein-Barr Diseases Research Program.

A member of the herpes virus family, EBV is one of the most common human viruses and probably the most complex in terms of how it interacts with the immune system. Most people around the world get infected with EBV at some point in their lives. EBV spreads most commonly through bodily fluids, primarily saliva. EBV can cause infectious mononucleosis and is associated with Hodgkin’s lymphoma, Burkitt’s lymphoma and other cancers. EBV is a risk factor for blood and bone marrow transplant patients and others who are immunosuppressed. In addition, evidence that EBV plays a role in the pathogenesis of multiple sclerosis is rapidly accumulating.

Because EBV interacts with the immune system in complex ways, Balfour and other faculty in his virology group work closely with faculty in the Center for Immunology. Together they conducted a prospective study of University undergraduate students without evidence of EBV infection to determine the incidence of and risk factors for the acquisition of primary EBV. They found that 25 percent of freshmen lacking evidence of EBV in their bloodstream are subsequently infected and acquire mononucleosis. EBV infection is associated with deep kissing with nearly nine of ten infected students showing symptoms. The researchers also found that the severity of symptoms is related to high numbers of natural killer cells, CD8+ T cells, and elevated blood viral loads. People with a history of mononucleosis are at higher risk for developing Hodgkin’s lymphoma and also multiple sclerosis (MS), a central nervous system disease that affects more than two million people worldwide. Nearly all MS patients possess EBV antibodies indicating acquisition of the virus.

Balfour and his colleagues together with a private company are working to develop a vaccine that could potentially prevent EBV-caused diseases like mononucleosis and EBV-associated diseases like Hodgkin’s lymphoma and MS. A vaccine could also potentially prevent severe illness or even death from EBV infection following transplantation, especially in pediatric patients who have not been exposed to the virus and have no antibodies against it. The investigators are targeting the EBV viral-surface glycoprotein 350 (gp350), which can prevent EBV from entering the cell. Because gp350 is the most highly expressed of EBV surface proteins, neutralizing antibody is developed in concert with recognizing the gp350 molecule. The experimental vaccine will be based on gp350 protein that can raise neutralizing antibody, which in turn prevents EBV from traveling from one cell to another once EBV infection occurs.

Balfour is Associate Editor of the Journal of Clinical Virology.