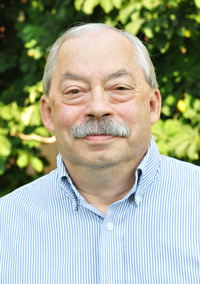 Research efforts in my laboratory are directed toward the identification and examination of bacterial genes involved in the early periods of legume-microbe symbioses. We specifically are interested in studying Rhizobium and Bradyrhizobium genes that play a prominent role in host/microbe recognition and in the establishment of symbiotic, nitrogen-fixing nodules specific B. japonicum strains. In addition, my laboratory (in collaboration with Dr. Larry Wackett) is using recombinant DNA methodologies to construct novel biodegradation pathways that will allow recombinant bacteria to aerobically degrade recalcitrant, halogenated, environmental pollutants. We also are actively involved in defining bacterial biodegradation pathways for the herbicide atrazine and using isolated proteins and constructed bacteria to bioremediate atrazine-contaminated soils and water.