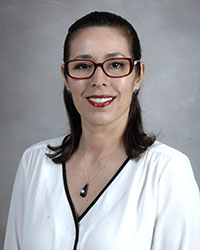 She received her MD degree at UACH in Mexico and completed two residencies; Internal Medicine at Texas Tech University Health Science Center and Neurology at UT Health Science Center where she was chief resident and received the “excellence in teaching” award. She then completed a research/clinical fellowship in MS with focus on imaging under Professor Emeritus Jerry Wolinsky MD.

She is a pioneer in the imaging of cortical gray matter lesions in MS and establishing a correlation with cognitive impairment. Currently her expertise extends to applications of multimodal MRI to detect cognitive changes in MS. She has received NIH funding to support her research, and received the NMSS Entrepreneur award to develop the recently updated “MS relapse tracker” app.

Dr. Nelson is currently the Chair of the Healthcare Provider Council for the National MS Society, Upper Midwest Chapter. She is a fellow of the American Neurological Association and the American Academy of Neurology. She has had multiple recognitions for her work such as “America’s top Doctors” and “Female Executive of the Year Award”.

She has multiple publications on MRI findings in MS; she has participated in centralized MRI analysis of important worldwide multicenter trials. She has served as the chair and reviewer for the Department of Defense MS research program, and as reviewer for the National Institutes of Health (NIH).