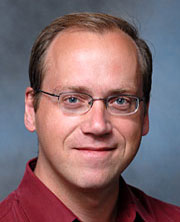 Dr. Hallstrom received his Ph.D. in Molecular Biology at the University of Iowa in 1999. He then did post-doctoral studies with Joseph Nevins at Duke University studying the control of Rb/E2F induction of proliferation and apoptosis. He joined the University of Minnesota in 2007 as an assistant professor in the Department of Pediatrics Hematology and Oncology division.

The Hallstrom laboratory is studying the cellular mechanisms controlling Rb/E2F induced apoptosis during normal proliferation and in cancer development. Normal cellular proliferation is tightly regulated by cell size, mitogenic stimulation and absence of signals that block proliferation. The retinoblastoma (Rb) protein is a pivotal regulator of entry into the cell cycle and, importantly, disruption of various components of this control pathway leads to deregulated proliferation that underlies the development of many forms of cancer. Rb regulation of cell cycle progression and tumorigenesis is dependent on its control of E2F transcription factor function, a family of proteins that control expression of genes required for proliferation. Further work has highlighted the role of E2F proteins, particularly E2F1, in forming the link between the deregulation of Rb pathway activity and induction of p53-dependent apoptosis. E2F1 apoptosis induction is believed to serve a tumor-suppressive mechanism by eliminating cells that have sustained an oncogenic mutation which activates the Rb pathway.

We recently identifed the domain in E2F1 responsible for its unique pro-apoptotic function and used this to identify Jab1/CSN5 as an E2F1 specific binding partner responsible for the transcription factors pro-apoptotic but not pro-proliferatory activity. We are currently studying the mechanisms that control Jab1 binding to E2F1, how this complex promotes expression of apoptotic but not proliferation target genes and whether formation of this complex is inhibited during tumorigenesis.

Since E2F1 normally accumulates when cells are stimulated to grow and is required for the initial entry into the cell cycle, the capacity of E2F1 to induce apoptosis must be blocked in order for cells to complete a normal proliferative cycle. We have previously demonstrated that E2F1 induced apoptosis can be blocked by PI3K and Akt survival signaling pathways induced following normal cell growth. We recently identified a subset of E2F1 target genes that are specifically repressed by PI3K/Akt signaling, thus futher distinguishing E2F1 proliferative from apoptotic function. RNAi-mediated inhibition of several of these PI3K-repressed E2F1 target genes impairs apoptotic induction by E2F1. Some of these apoptotic gene products, like MLLT3 and Nr4a3, have been directly linked to the development of childhood cancers like ALL and AML. We demonstrated that an alteration in the balance of the apoptotic and proliferative E2F1 gene expression programs coincides with poor prognosis in both breast and ovarian cancer, emphasizing the importance of these events for a clinical cancer phenotype. The implication of these findings is that a PI3K repressible E2F1 target gene subset may be induced by conditions of insufficient nutrient availability or other stresses in the context of otherwise pro-proliferatory conditions. We are continuing to address the mechanistic interplay between PI3K, Akt, Jab1 and E2F1 in control of expression of apoptotic gene expression.