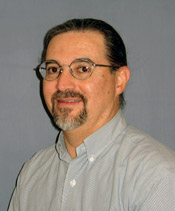 Telomerase is a ribonucleoprotein enzyme whose RNA component serves as a template in the synthesis of telomeric DNA. There is high interest in telomerase because of the intriguing correlation between the events leading to human cell immortalization and the activation of this enzyme. Telomerase activity is detected in nearly all cancerous tumors, whereas it is absent from most normal somatic cells.

In contrast to telomerase from most organisms (including the human enzyme), Dr. Romero's laboratory has shown that Paramecium telomerase synthesizes variable telomeric repeats by making a stereotypical misincorporation error during telomere elongation. They have shown that these errors arise by the same mechanism as those made by HIV-1 reverse transcriptase, an error-prone enzyme that lacks a proofreading exonuclease activity. Understanding the molecular mechanism(s) of variable telomere synthesis by the Paramecium enzyme will shed light on how telomerase from other species are able to maintain high fidelity.

Dr. Romero's research interests include developmentally controlled genome rearrangements, specifically the molecular mechanism(s) of gene amplification. The failure of many antineoplastic drugs to combat human cancers is often due to the amplification of genes that confer resistance to the drug in question. Because of the rRNA gene amplification that occurs as a normal course during their development, the ciliate Tetrahymena is an ideal experimental system to dissect these processes. As a first step in these studies, the highly conserved and ubiquitous DNA recombination factor RAD51 has been isolated and characterized. The phenotypes of recently constructed Tetrahymena strains whose RAD51 gene has been disrupted, with regard to the genome rearrangements and rDNA amplification that occur during development, are currently being explored.