Creating the path from a devastating injury to a miraculous recovery

|
Christine Morgan
3 minutes
Note: to protect her privacy, the patient’s name is not used in this story.

Imagine that you’ve gone to visit your daughters in the Twin Cities after two years of not being able to do so because of the COVID-19 pandemic. One day during the visit, you get a sudden-onset severe headache with nausea and vomiting. You start to feel sleepy. One of your daughters, who is a physician with Hennepin Healthcare in Minneapolis, calls the paramedics. 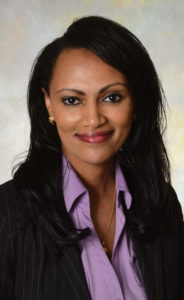 “She was taken to Fairview Ridges in Burnsville, and they found that she had a spontaneous cerebellar hemorrhage,” said Tenbit Emiru (pictured here), MD, PHD, MBA. The large hemorrhage (otherwise known as a hemorrhagic stroke) was in the posterior fossa area of the brain and could cause death without timely removal of the blood clot.

“When we learned that she had bleeding in a critical part of her brain, it was apparent that she needed to be transferred to where she could receive a higher level of care,” said Dr. Emiru. “That meant University of Minnesota Medical Center [UMMC].”

As soon as her mother got to UMMC, she had a drain placed to relieve the pressure on her brain and was immediately taken to the operating room to have the clot removed. “Our focus was on evacuating the blood clot as soon as possible – as with any type of stroke, time is of the essence,” said Department Head Clark C. Chen, MD, PhD, who was on call at UMMC the day the patient arrived. “What’s impressive in this situation is that within 30 minutes of the patient leaving Ridges Hospital in Burnsville, we were operating to remove the clot.”

Thanks to her work as a neurointensivist, Dr. Emiru already knew Dr. Chen’s reputation before her mother ended up in his care. “I had no concerns about her being in the right hands,” she said. “To see him and his team in action was impressive. I would let that team take care of any family member.” 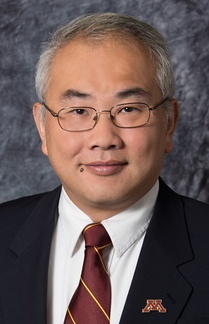 Dr. Chen (pictured here) knew that the more time it took to remove the blood clot, the more likely the patient would have sustained damage. “It is a high-pressure situation in which every minute could make all the difference in terms of potential for a full recovery,” he said. “In this case, the hemorrhage occurred in the deeper part of the brain. We needed to move quickly while avoiding injury to unaffected areas.”

Communication with family members was critical during the unexpected hospital stay. “Dr. Chen called me at four in the morning to let me know how the surgery went and what to expect the next day,” said Dr. Emiru. “Throughout her stay, if I wasn’t talking with him, I was talking with his residents. I could then communicate with the rest of my family. It was fantastic.”

The patient was in Neuro Intensive Care for two weeks before moving to a rehab facility for another two weeks to get occupational, speech, and physical therapy. “My mother lived a very healthy life and walked five miles a day [before this happened],” said Dr. Emiru. “To find herself in this position was very frustrating.”

Fortunately, her mother has almost completely recovered from the stroke. “She had eight weeks of physical and occupational therapy when she returned to California,” said Dr. Emiru. “She’s in her own home where she can garden and do the things she loves.”

There is a saying in medicine – that the patient carries the disease, and the family carries the patient, noted Dr. Chen. “While we provided the resources and surgical expertise, it was the love, dedication, and perseverance of the family that ultimately ‘carried’ this patient along her path to recovery,” he said. “The family was there every step of the way, seeing light despite the occasional darkness, and never giving up hope. Their love and care made all the difference.”