In January of 2019, Denise was diagnosed with glioblastoma, the most aggressive form of brain cancer. At that time, she was given 14 to 18 months to live, which was “a real punch in the gut,” said Walter. “It takes time to even grasp it.”

The initial treatment was not effective, and the tumor continued to grow. Denise’s oncologist recommended that she see Chen. “The first time we met with Dr. Chen was in October,” said Walter. “He looked at Denise’s MRI and said he could absolutely help … using the capabilities of the T-suite at the University of Minnesota Medical Center.” For the first time since Denise’s diagnosis, the Kjellbergs felt hopeful.

Cutting-edge technology
The T-suite is equipped with a powerful mobile magnetic resonance imaging (MRI) scanner that guides neurosurgeons’ delicate work in real time. The scanner is configured to support the most advanced robotic surgery as well as minimally invasive laser technology.

In early November, the Kjellbergs went to University of Minnesota Medical Center for the first surgery, which was to be an MRI-guided laser ablation. “They were very nice people who took great care of her,” said Walter. “Dr. Chen is the cream of the crop. He is so gentle, so caring … such a wonderful man. He explained everything forthrightly and in a way we could understand. We felt very comfortable with him.”

Change in strategy
Unfortunately, an MRI taken on the morning of Denise’s procedure showed that her tumor had grown to a size that was unsafe for laser ablation. Adjusting to the new reality, Chen changed his strategy. He performed a surgery that resected the portion of the tumor that could be safely removed, then planned a laser ablation for a later date.

Denise’s second procedure – scheduled for February 5, 2020 – would be a landmark. “We were told that she would be the first in the world to be treated with robot-assisted laser ablation in the T-suite,” said Walter. Why use the robot for this procedure? “The residual tumor was wrapped in several arteries,” explained Chen. “Injury to these vessels by the laser probe would cause devastating strokes. We needed absolute precision to get to the tumor while avoiding the arteries – the type of precision that only a robot can offer.” 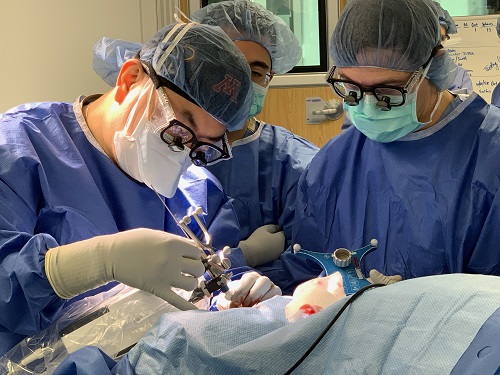 Using the T-suite’s intra-operative MRI, Chen was able to define an optimal path to the tumor in real-time, while avoiding the many clusters of arteries. The robotic arm was employed to precisely define the ideal entry point, where a pea-sized incision was made. It then guided the drilling of a comparably sized hole through the skull and insertion of the laser probe into the tumor. The laser was then fired to destroy the tumor. Throughout the procedure, multiple MRIs were taken to allow adjustments that afforded absolute precision, according to Chen.

“It was incredibly rewarding to be able to bring this first-of-its-kind surgery to my patient, through the unique capabilities of the T-suite, especially for a tumor many surgeons considered unresectable,” said Chen.

Denise walked out of the hospital on her own the next day. “It was hard for me to even know it happened,” she said. “I feel…this is going to sound weird…like I’m almost back to 100 percent. I’m very thankful for Dr. Chen and God, who were both with me.”

It was a miracle
Walter thinks Denise’s response to the surgery was a miracle. “She cooks, takes care of the checkbook, and gets around just fine,” he said. “It’s hard to believe she has something as potentially devastating as this can be. She deals with it with a great attitude, thanks in part to Dr. Chen.”

“That’s very important,” Chen noted. “We don’t often recognize how important the psyche of the patient is to their recovery. Time and again, I’ve seen patients who are exceptional responders have one thing in common – their indomitable spirit. It forms the substrate for surgical and medical success. I try to foster that spirit in all my patients.”

And now Denise and Walter have time to plan a visit to Cross Lake’s “biggest St. Patrick’s Day Parade in Minnesota.” To seek out waterfalls along the state’s North Shore. And to celebrate their 36th anniversary in June. “The biggest thing is how important this time is,” Walter said, adding, “to be able to stay a step ahead and to be positive.”