Thanks to generous funding of a clinical trial, brain tumor sufferer getting more time with loved ones

Early in 2018, Bloomington, MN, resident Holly Ziebol was diagnosed with glioblastoma, the most common form of brain cancer in adults. “She has a rare type of glioblastoma that harbors a mutation in a histone gene,” explained Clark C. Chen, MD, PhD, U of M Department of Neurosurgery Head. “Histones are proteins that package DNA into structural units. They regulate which genes are turned on and which are turned off.” This mutation, known as H3K27M, turns on a set of genes leading to protein formation that drives cancer growth, Chen added.

Holly subsequently underwent multiple treatments, but the tumor grew back within months of each one. Fortunately, Chen’s research had uncovered a drug uniquely suited for Holly’s tumor. “ONC201 is a small molecule that specifically ‘shuts off’ one of the proteins uniquely required for the growth of H3K27M glioblastomas,” explained Chen. “To date, there have been several patients whose tumors shrunk after ONC201 treatment. This drug could be the ‘silver bullet’ that Holly needs.”

Breaking through barriers
Unfortunately, neither the University of Minnesota nor the company that makes ONC201 had enough resources to sponsor a local clinical trial of the drug; however, that didn’t stop Chen. 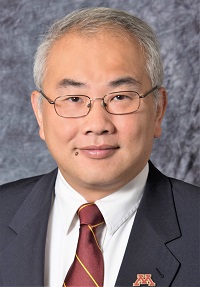 Chen (pictured at left) approached Minnesota residents Bob and Corinne Ferris, long-time U of M Foundation donors who support cancer research. “Dr. Chen had an opportunity to potentially leverage our money and get the University to agree to fund some of this work,” Bob said. “In my mind, it was a beautiful application. It’s exactly the kind of thing I hope that researchers are smart enough to spot and do.”

As a result, some of the Ferris’s funding was used to bring an ONC201 trial to the U of M and in August 2019, Holly was one of the patients enrolled. “When I found out the donors had stepped up, I was ecstatic,” she said. “I want them to know how much it means to people like me. It’s wonderful because I didn’t have a lot of options.”

Chen agreed, adding, “Without the generosity and benefaction of the Ferrises, Holly would not have access to this potentially life-saving drug.”

The trial requires Holly to follow a medication regimen and go in for checkups once a month. She has found that side effects are nonexistent, other than the fatigue that brain tumor patients often suffer.

Bob explained why he and Corinne felt strongly about supporting this trial. “These projects are at an early stage…that is the timeframe researchers have a lot of trouble funding,” he said. “Corporations don’t want to invest unless they’re assured of a payback. In early phases of research, as many projects fail as succeed. Dr. Chen’s situation really drove that home to me.”

Both Bob and Corinne are passionate about funding cancer research, having lost three of four parents to the disease. They both got involved with the American Cancer Society several years ago, and Bob served on the committee that evaluated research proposals. As a retired electrical engineer, he took his appointment seriously. Having seen the high quality of the proposals and the limited funding available, Bob was troubled by the number of outstanding proposals that go unfunded. “It brought tears to our eyes when we rated applications as outstanding but couldn’t fund them,” he said.

Best researchers nearby
These experiences inspired Bob and Corinne to take a more direct approach to funding cancer research. Just as they were homing in on a project they could fund, Corinne and Bob were connected by a family friend to the University of Minnesota Foundation. It turns out, according to the Ferrises, that some of the best cancer researchers were in their own backyard. “One of the things I’ve learned that is a real plus for the U is that they’re great collaborators,” said Bob. “They believe in sharing their knowledge with anyone who is interested. That is not true for many institutions doing research.”

The couple also attended a Discovery Showcase at the U. “We heard directly from the researchers about what they were doing and that really inspired us,” added Corinne.

Corinne and Bob both have special relationships with the University of Minnesota. Corinne graduated from the College of Education and went on to get her Master’s. Several years ago, Bob had a life-saving liver transplant at the U. “If it wasn’t for the great doctors at the University, I wouldn’t be here today,” he said. “They actually created the opportunity for me to donate.”

That opportunity is giving Holly and all her friends and family a tremendous gift – the gift of time. “It’s important to fund these studies and trials,” she said. “I really appreciate having the additional treatment and the additional time it gives me with my loved ones.”

Advice for potential donors
Bob and Corinne encourage people interested in donating to cancer research at the U to attend a Discovery Showcase…give someone at the Foundation a call…talk to someone who has suffered from a disease. “I don’t think people realize that they have a say about where their money goes.” Bob said. “They get to pick a project, a researcher. If they see a project that’s right up their alley, they can help fund it, knowing that’s who will get their money and put it to work.”

From Chen’s perspective
Alexis de Tocqueville, the famed French historian who visited the United States in the 1830s, made the following observation about our forefathers, “I have seen Americans making great and sincere sacrifices for the key common good and a hundred times I have noticed that…when needs be, they almost always give each other faithful support.” To de Tocqueville, the magnanimity of spirit and sense of community is what fundamentally defines us as Americans. This magnanimity is alive and well today in the University of Minnesota community; it is what gave Holly another chance in life. As federal research funding continues to dwindle, it will be incumbent upon all of us to come together as a community to support the research that will yield the life-saving measures that we or our love ones will someday need.