This past October, William Jacott, MD, received a Lifetime Achievement Award while being honored at the Marshall H. and Nellie Alworth Memorial Fund's 70th anniversary celebration in Duluth, Minnesota. Thanks to the Fund, more than 5,100 college students in northern Minnesota have received scholarships. Following in the footsteps of past recipients of the Lifetime Achievement Award, Dr. Jacott has amassed an impressive collection of achievements and advancements. (Photo below courtesy of Daniel William Jacott.) 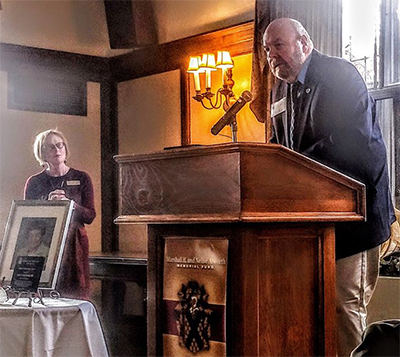 After working in private practice for a number of years, Jacott served as head of Family Medicine and director of the Duluth Family Practice residency at UMD from 1974 to 1978, after which he returned to private practice. He was recruited to serve as the assistant vice president of health services at the University of Minnesota Twin Cities in 1987.

Following this leadership position, he remained at the University until his retirement in 2004 and served as interim and then permanent chair of the Department of Family Practice and Community Health. He has held many prominent leadership positions in professional organizations throughout his career, including his tenure on the Board of the American Medical Association and his 33-year service on the Alworth Memorial Fund Board of Directors.