Physical Medicine and Rehabilitation (PM&R) Residency Program Director Brionn Tonkin, MD, has led his program through significant changes, from building a sense of ownership within the program to navigating through COVID-19 restrictions to adjusting to explosive growth.

Dr. Tonkin’s own role has evolved over time. He started as site director in 2012, became the associate director the next year, and then full director in 2016. He provides patient care at two of the seven sites at which department residents receive training – the VA and Hennepin Healthcare (the others are University of Minnesota Medical Center, Fairview Acute Rehabilitation Center, Regions Hospital, Gillette Children’s, and Courage Kenney Rehabilitation Institute).

Building ownership
When Dr. Tonkin began leading the program, he continued a significant project started by his predecessor that looked at building ownership. “We had fairly loose requirements for resident performance and attendance at the start,” he said. “We wanted to create a culture of ownership, with an underlying theme of, ‘This is our program, and it can be as good as we want it to be.’”

Switching to more of an ownership culture meant turning up the heat. “It was a little uncomfortable at first,” he said. “Now, we routinely have five or six residents and a couple of medical students presenting posters during national meetings. We’ve also had residents publish in journals and write chapters in textbooks. That would have been rare 10 to 20 years ago.”

Impact of COVID-19
Another big sea change for the program was the impact of COVID-19. “We have seven training sites and five have inpatient units,” explained Dr. Tonkin. “The five residents associated with those units continued to work. The other fourteen were sent home temporarily.” It took the program a while to get remote access set up for the benched residents. “We had to flip our educational process from 100 percent in person to 100 percent virtual,” said Dr. Tonkin. “We eventually got things to the point at which the residents could review patients remotely.”

The adjustments made because of the pandemic also created psychological distress. “Our residents would get together every week for four hours during their lectures and would socialize during breaks, get coffee together, or eat lunch afterwards,” said Dr. Tonkin. “It was a chance to see everyone.” Being spread over seven sites made it challenging, but the residents could count on the Wednesday lectures for that kind of interaction, he noted.

Having to switch to remote learning via Zoom wasn’t a great substitution for that interaction. “We had to make a lot of adjustments,” said Dr. Tonkin. “People really struggled with all the changes and uncertainty. Now that the COVID restrictions are easing somewhat, it feels good to get back to work. Our lectures are still virtual but I’m shooting for a 50-50 split between in-person and online.” 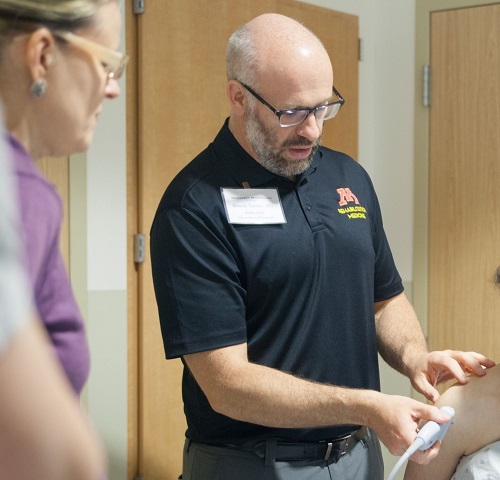 The COVID “pause” also created an educational gap for some residents. “We had to come up with alternative methods of education,” said Dr. Tonkin (demonstrating a procedure at left). For example, the Association of Academic Physiatrists started a virtual didactic series and he made sure the residents were aware of it. “Four hours staring at a screen at home, however, is much different than four hours of live lectures,” he said.

Overall, the educational gap in terms of lectures and didactics was much smaller than what the residents lost in terms of patient care and procedures. “They have a minimum number of procedures to complete over their four years to be able to graduate,” said Dr. Tonkin. “Those numbers were significantly set back; however, all programs got a ‘pass’ from the Accreditation Council of Graduate Medical Education [ACGME] because of the pandemic. Regardless, we made sure that residents interested in any missing procedures got what they needed.”

Program growth
Another change that Dr. Tonkin witnessed over time has been the growth of the program. “We increased the size of our program a few years ago,” he said. “And as other health systems get staffed up and as new doctors come in, we’re looking forward to having the residents do new procedures, learn new things.”

With the University’s renewed emphasis on diversity, equity and inclusion, Dr. Tonkin is confident that the residency program meets all the standards. “We have blind screening for our applicants,” he said. “It’s all based on their letters of recommendation, whether they did a PM&R rotation, of if they have done research and published, among other things. Last year, almost half of our residents were first or second-generation immigrants or raised in another country. It’s happened naturally – we want good people here.”

More research
Looking into the future, Dr. Tonkin would like the program to focus more on research. “Our department leaders, Dr. [Leslie] Morse and Dr. [Ricardo] Battaglino, are very supportive of that,” he said. “We give our residents excellent clinical training, but if you look at prominent national programs, their residents are contributing to the literature. They’re not just doing poster presentations; they’re giving podium presentations during national meetings. Creating those opportunities for our residents who want to do that will be a big thing.”

Through all of this change, Dr. Tonkin never forgets his first priority. “Taking care of our residents so they can learn what they need and can take care good care of patients looks different for each of them,” he said. “Blanket approaches are hard to apply because someone who needs to be pushed is sitting next to someone who needs to scale back a bit. The goal is to make them great physicians while understanding they’re here for an excellent education, not as a labor force.”