Medicine is a second career for Vidhu Pandey, who worked for nearly a decade as an aeronautical engineer—even interning with NASA—before deciding he needed a change.

“My step-father passed away and I had this quarter-life crisis,” he says. “So when all this happened, I asked myself if I was really doing what I was happy with, and the answer was ‘Maybe not.’ ”

Pandey started shadowing and volunteering. He took night classes in physiology and realized he had a connection to the field. Beyond the science, he says, connecting with people was an important difference from his career designing jet engines. “I actually like to talk to people," he says.

At first, he was worried about being an older, non-traditional medical student. Some of his engineering colleagues even poked fun at him, wondering how he’d get along with the typically younger students he’d be taking classes with, but the fears turned out to be unfounded once he arrived on campus.

“It was surprising to me," he says. "I don’t think if I’d have done medical school straight out of college I would’ve been nearly as mature and ready to face the challenge as some of these people are. Hats off to them.”

Still, Pandey has no regrets about his indirect path, and his love of taking time to explore has carried through to medical school.

“The cool thing about school here is that you have some required coursework and the rest is up to you,” he says. “I’ve taken transplant surgery. I’ve taken ophthalmology. You’re only in medical school once so you might as well get the most from it that you can.”

As a husband and father with two small children—a son, Walter, who is just over two years old, and a daughter, Thea, who was born in the fall—Pandey’s results on Match Day will affect the entire family. Thankfully, his wife Diana, a physician, understands the process; the two met in Cincinnati during her residency.

“I think the biggest anxiety for me is not really knowing,” he says. “I’m the type of person who likes to plan ahead and have an idea of what I’m getting into.”

While he has to wait for Match Day to find out his next steps, Pandey does know where he hopes to be in the future: helping families in critical care and continuing to raise his own.

“When I took my sub-internship in the ICU over the summer, I found a lot of value in talking to families and getting their questions answered,” he says. “I thought that was really powerful and it’s something I look forward to making a big part of my practice when I’m doing it in the thick of things 20 years from now.” 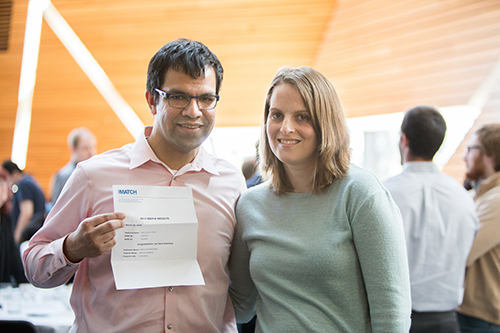 Update: On March 16, 2018, Vidhu Pandey matched with the University of Minnesota in Medicine-Pediatrics. Learn more about Match Day 2018, find more student stories like this one, and our full list of matches at med.umn.edu/matchday2018.