Traveling to Uganda and back three times a year, this collaborative doc makes strides in understanding and treating meningitis in people who have HIV
By Cynthia Scott

Joshua Rhein, M.D., is someone who always goes the distance. Tens of thousands of miles, in fact.

As director of training and research at the Uganda Hub, a program of the University of Minnesota’s Center for Global Health and Social Responsibility (CGHSR), Rhein divides his time between Minnesota and Kampala, Uganda’s capital city, making the approximately 16,000-mile round-trip to the Twin Cities three times a year.

But the impact Rhein is having can’t be measured in miles. In the five years he has lived and worked in Uganda, he and his team have made enormous strides in understanding and treating meningitis in people who have HIV disease — his primary research focus — and in helping build collaborative, productive relationships among students, researchers, and practitioners in both Uganda and Minnesota.

“I feel we are making a large impact in Uganda, whether it be the research we are working on or through our involvement in training the next generation of Ugandan researchers,” says the 2007 Medical School graduate.

Since he arrived in Uganda, Rhein has enrolled roughly 1,000 cryptococcal meningitis patients in clinical trials directed by his primary mentors, the U’s David Boulware, M.D., M.P.H., and Makerere University’s David Meya, MBChB, Ph.D. “Through the trials, we’ve gotten better at learning how to take care of these patients,” Rhein says.

Even medical student and resident sub-studies coming out of clinical trials have borne fruit, such as one that helped Rhein and his team determine the best way to supplement electrolytes and give IV fluids to mitigate the side effects of drugs.

Two years after the protocol became established, it was added to the World Health Organization’s guidelines. 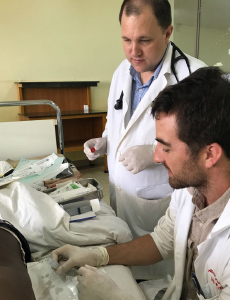 Rhein supervises visiting U of M internal medicine resident Alex Zanotto, M.D., while he performs a lumbar puncture on a patient with meningitis. (Photo: Anteneh Zewde)

The chance to do work that matters is what drew Rhein, 42, to global health. He first went to Uganda in 2006, during a flex year in medical school, to help Paul Bohjanen, M.D., Ph.D., now director of the Division of Infectious Diseases and International Medicine in the Medical School’s Department of Microbiology and Immunology, establish the first collaborative research projects between the U and Makerere University.

The opportunity to work in Uganda alongside Bohjanen was attractive to Rhein in part because he longed to return to Africa after a previous two-year stint in the Peace Corps. It turned out to be a momentous decision.

“That year changed my outlook,” says Rhein. “It introduced me to academic medicine and research. I started seeing that global health could be a career, and I saw the power of research to change how clinical medicine is practiced.”

When Rhein left Bohjanen’s lab to begin his residency at Indiana University, he didn’t think Uganda would be in his future. But after he finished his infectious diseases fellowship at the U in 2012, the promise of the then-nascent Uganda Hub beckoned him. He has been there ever since.

The U of M’s Academic Health Center (AHC) established the Uganda Hub in 2015 to strengthen the infrastructure needed to support robust research, education, and training the Medical School and its AHC and Uganda partners were conducting. The Hub’s central operations are at Makerere University’s Infectious Diseases Institute in Kampala, where Rhein works, but it also supports research projects in other areas of the country.

“I call Uganda our legacy hub,” says CGHSR executive director Shailey Prasad, M.D., M.P.H. “The Hub was a natural extension of the activities the U has had in Uganda for some time.”

One of Rhein’s key roles is to lead the Ugandan Research Training Collaborative, a unique program that teams up students from Minnesota and Makerere under the mentorship of faculty members from both institutions. The interdisciplinary, international teams propose and carry out their own independent projects on the ground in Uganda.

Prasad considers the program the embodiment of reciprocal engagement in that it benefits learners on both sides and lays the groundwork for equitable long-term relationships. And Rhein, he says, is exactly the right person to nurture its development.

“Besides being a wonderful human being, Josh is very humble in his approach,” Prasad says. “He has a lot of working experience in Uganda. He understands the local conditions very well and our learning culture here. His cultural outlook is perfectly blended.”

“There is never a dull day while living and working in Uganda,” he says. “Ugandans are just about the nicest people you will meet. It is the ideal place to start a career in academic research.”