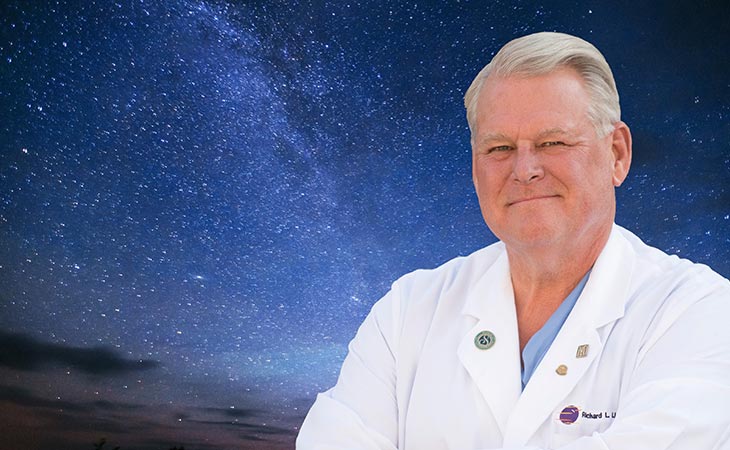 NASA hopes to send a mission to Mars in 2030. But the agency’s longtime dream of landing a team of astronauts on the Red Planet requires bridging the enormous distance between the Earth and Mars — a trip estimated at 150 million miles.

What’s more, achieving that goal may depend on correcting a vision problem associated with long-duration space travel.

The vision problem is just one of several health side effects caused by the zero-gravity environment found in space, says Twin Cities ophthalmologist and University of Minnesota graduate Richard L. Lindstrom, ’72 M.D. Without the pull of gravity, blood distributes itself more evenly throughout the human body.

“The fluid shifts toward your head, and about two liters of fluid that should be in your lower extremities end up above the heart,” Lindstrom says.

The result is pressure on the optic nerve and, potentially, a flattening of the eye that may cause temporary or even permanent changes in an astronaut’s vision.

Lindstrom is one of a handful of vision experts — including a glaucoma specialist, a retina specialist, and former Top Gun pilot turned refractive surgeon — recently tapped by NASA to investigate the problem and suggest potential solutions. The advisory group, including both ophthalmologists and vision-industry leaders, has met twice to discuss the problem with members of the National Space Biomedical Research Institute (NSBRI), a NASA-funded consortium.

NASA and NSBRI have known of the problem, referred to as visual impairment and intracranial pressure syndrome (VIIP), for many years. After eight to 12 weeks in space, some astronauts start to develop blurry vision as blood pressure builds. But the malady doesn’t strike every individual, and it generally subsides when the team returns to Earth, so NASA officials haven’t been all that worried — until now.

Most space trips are fairly short, and problems associated with VIIP have generally begun after roughly 90 days in space. A trip to Mars, however, is expected to take up to 950 days. Which is why NASA wants to find a fix.

Research on VIIP was first published in medical journals in 2011. (Its symptoms have been found in Russian cosmonauts as well as American astronauts.) But that basic understanding of the problem didn’t lead to any immediate solutions. So NASA assembled the advisory group and asked its members to take a fresh look at the problem. “They wanted some new thinking, and they didn’t want us to be influenced by all the things that they were thinking,” Lindstrom says.

Diving deep into the existing research data, Lindstrom found additional information that ultimately may help NASA remedy or sidestep the issue. Perhaps most interesting, he discovered that VIIP seems to affect more men than women.

“Of course, not that many women have been sent into space,” Lindstrom notes. (NASA’s culture and history have long been dominated by men.) “But the guys who you think are ‘The Right Stuff’ — muscular-built types — seem to be more prone to the syndrome.”

One possible solution for the Mars mission? Send only women, Lindstrom says.

Lindstrom’s review of related medical literature led to a second discovery as well: a similar syndrome affects some inhabitants of Earth. Called “idiopathic benign progressive hyperopia with choroidal folds and papilledema,” it’s a rare condition with symptoms similar to the space-induced changes. But the cause is unknown.

The NSBRI/NASA team has proposed a few possible remedies so far. Drugs may help lessen the pressure — but the most likely medications, at this point, become toxic at high levels. Adjustable eyeglasses may be a temporary solution, but they wouldn’t lessen the possibility of permanent damage, Lindstrom observes.

Plus, any approved solutions would have to be tested in space — which would take planning and protocols.

“I’m confident the problem can be solved,” Lindstrom says. “We have the right team. We have the research background and the creativity. It’s just going to take some time.”

As a kid growing up in the Minneapolis suburb of Wayzata, Richard Lindstrom never really longed to be a rocket man — but he did briefly consider becoming an aeronautical engineer.

His education at the University of Minnesota, however, proved pivotal in steering him toward medicine: His freshman adviser, H. Mead Cavert, M.D., Ph.D. — who happened to be an associate dean of the Medical School — encouraged him to go premed.

Lindstrom ultimately earned a B.S., B.A., and M.D., landed a teaching job at the U, was awarded an endowed chair, and became the U’s chief specialist in corneal replacement. In 1989 he left the U to establish his own private practice, now a multipartner practice called Minnesota Eye Consultants. He holds more than 30 patents and has developed several solutions, intraocular lenses, and instruments that are used today in clinical practices globally.

Lindstrom now serves on the University of Minnesota Foundation’s Board of Trustees.