Anatomy of a violin 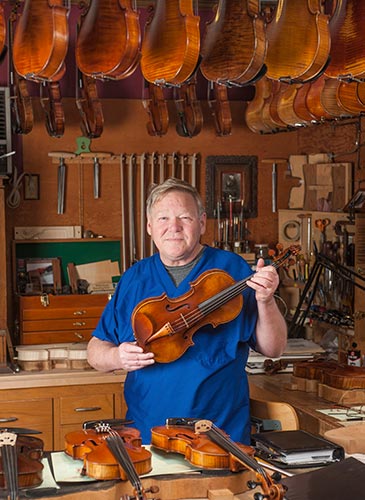 The first time, it occurred by happenstance. Steven Sirr, M.D., was the attending radiologist on duty at Hennepin County Medical Center one Saturday afternoon in 1987. He was in charge of three radiology residents who didn’t need much supervision, he recalls, so in his free time, he played his violin.

“There was a gunshot victim who needed a CT [computed tomography] scan before he was going to be taken to surgery,” says Sirr, Medical School Class of 1979. “I was playing my violin at the time, and I ran down the hall with my violin, not even really knowing I was holding it. And I put it on a table next to the CT scanner.”

Once the patient had his scan and left for surgery, Sirr found himself wondering what his violin would look like under CT. The machine captured the images — and his interest. He took the images to violin maker John Waddle, who had sold him his first violin, and they were both intrigued by the intricacies of the anatomy they observed.

Since then, Sirr has scanned many hundreds of bowed stringed instruments, including 44 crafted in Cremona, Italy, before 1781, that are worth more than $1 million. Sirr is the only radiologist member of the elite Federation of Violin Makers, and he’s sought out by people around the world to scan their beloved and often historically relevant instruments.

Through his three-plus decades of work in this realm, Sirr has drawn several parallels between violins and human medicine — particularly in his own specialty. A radiology resident, he explains, spends two to three years learning what the normal range of human anatomy looks like. “One of the worst mistakes you can make as a radiologist is calling a normal variation a disease,” he says.

That’s why Sirr honed his expertise in violins by scanning as many as he could to help him understand what’s normal for a violin and what could be considered a “disease” from trauma or worm infestation.

And much like humans change as they age, so do violins. “Just like we get fatter with age,” he says, “turns out they do, too. The volume inside increases by about 3 percent.”

Then there’s a less tangible parallel, but it’s one that has helped Sirr maintain his appreciation for the beauty of the instruments themselves: “Violins bring beautiful music and love into the world, which, you know, people should do, too.”

Want to stay connected with the Medical School and University? Here’s how.