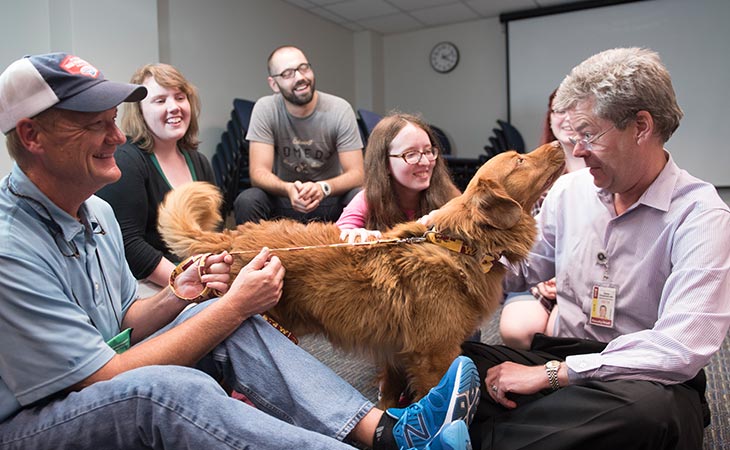 Send in the clowns.

It’s not the first time the word “unusual” has been used when describing his work. But Christenson is proud of having been the driving force behind a few creative ways to get students talking about mental health.

“Cirque De-Stress,” for instance, is a day full of circus performances on the hour. Between performances, students learn about the many mental health resources available at the U.

On the first Cirque De-Stress performance day in 2013, 2,300 people came through the door, Christenson reports. They came because they liked circuses, surveys later told him, but they also found value in learning about mental health there. It’s now an annual event.

And what’s more calming than petting a warm, soft dog? Or chicken? One of Christenson’s proudest accomplishments is launching the Pet Away Worries and Stress (PAWS) program with animal-assisted-interactions expert Tanya Bailey. After two years, the weekly program averages about 150 attendees.

The ideas keep coming because Christenson keeps listening to what students want. His office conducts a lot of surveys to find out what they’re dealing with — stress, anxiety, depression, and homesickness (for pets, too) aren’t uncommon. These surveys also reveal a changing mindset: the majority of students say they wouldn’t think less of someone who had a mental health–related diagnosis, but they fear that others would think less of them if they had such a diagnosis, Christenson says.

“One of our challenges with stigma is educating: actually, most people are on the same page with you,” he says.

Besides, who’s got time for judgment when there’s a fluffy bunny just waiting for a cuddle?