A brain out of tune

Computational psychiatry — the use of such tools as data analysis, computer simulation, mathematical models, and brain imaging — can reveal how and why a brain becomes discordant
By Susan Maas

Sophia Vinogradov, M.D., isn’t given to hyperbole; she tends to speak with a scientist’s precision and restraint. But she doesn’t hesitate to give an emphatic “yes!” when asked if psychiatry is undergoing a revolution.

“In the next five to 10 years, we’re going to see radical changes in how we think about evaluation and diagnosis and treatment of mental illness — even in how we make prognoses,” says Vinogradov, head of the University of Minnesota Medical School’s Department of Psychiatry.

In the new era she envisions, psychiatrists will use data-driven mathematical modeling to understand the flow of information in an individual’s brain — leading to more effective, finely tailored therapies for patients.

This emerging approach, called computational psychiatry, will lead to a golden age in the evaluation and treatment of mental illness, predicts Vinogradov, who holds the Donald W. Hastings Endowed Chair in Psychiatry.

In a commentary she wrote last year for Nature Human Behaviour, she likened the brain to a symphony orchestra; each person’s unique and malleable brain circuits “perform their computations (play their music) across a probabilistic distribution of tuning, efficiency, coordination, and connectivity,” she wrote. “The brain that has ‘poor tuning,’ ‘inefficient connectivity,’ or a ‘dysfunctional conductor’ will show alterations in thoughts, feeling, and behavior.”

“All you need,” she explains in person, “is a little [misfire] here and a little one there, and all of a sudden, the symphony is playing out of tune.”

Currently, psychiatrists can’t pinpoint where or explain exactly why the misfires are occurring; they can only describe the consequences.

“What’s unique to psychiatry is that we make diagnoses that are completely descriptive,” says Vinogradov. “‘Depression,’ for example, is really just a description of the behavior; it’s the manifestation. It’s not based on an understanding of the underlying pathophysiology of what’s actually going wrong in the body.”

Until now, Vinogradov says, “it’s been really hard to make a connection between what the neuroscientists were studying — in terms of how the neurons were functioning — and what you see when you talk with the patient in front of you.”

Computational psychiatry helps connect those dots. “We can create almost an engineering algorithm of how an individual’s information flow is going, at least hypothetically, to a certain kind of behavior,” Vinogradov says. “The goal is to figure out what are the right indicators and how do you follow them over time?”

Collaboration between neuroscience and psychiatry is critical to making that happen — and it’s flourishing at the U of M, says Vinogradov.

“There’s an incredibly strong neuroscience department here,” she says. “Collaborating with [neuroscientists] has really informed how we [in psychiatry] think about our next steps.”

She meets regularly with neuroscientist and Distinguished McKnight University Professor David Redish, Ph.D., an international expert in computational psychiatry. “He’s literally written the book,” she says, referring to Computational Psychiatry (published in 2016), which Redish coedited with Joshua Gordon, M.D., Ph.D., director of the National Institute of Mental Health. “This may be one of the only places in the world where a basic neuroscientist is consulting and dialoguing with the head of psychiatry, who’s thinking about how we bring this into the clinic.”

Vinogradov partners with colleagues from other disciplines at the University, as well, including a “powerhouse” group of people in the Institute for Health Informatics and imaging specialists at the U’s Center for Magnetic Resonance Research.

“The whole is much greater than the sum of its parts,” says Redish of the crossdisciplinary research. “And what Sophia’s done that’s really amazing is she’s been the integrative [force] to pull in all of these different people. She has the ability to connect with people in so many different fields.” 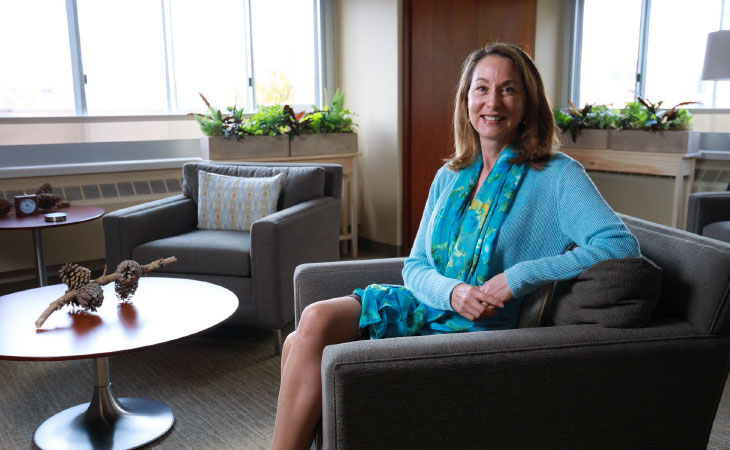 Exercise for the brain

It’s a line of inquiry that revolves around the brain’s remarkable plasticity, and it requires the patient to actively engage.

“It’s so analogous to going to the gym and doing reps,” Vinogradov says. “It’s hard work, but [the exercises] get these information pathways to start working correctly again.”

Currently, the University of Minnesota Health psychiatric clinic is piloting an initiative — called the Discovery Program — to bring measurement-based care to patients who have experienced their first psychotic episode.

Patients in the program come to the clinic and log on to a computer to complete self-reports on their perceived stress, social functioning, drug and alcohol use, nutrition, and coping strategies, says Vinogradov. “[We look at] processing speed, working memory, executive function, ability to process auditory and visual information, and so forth,” she explains. “It’s almost like getting your lab tests done before your doctor’s appointment.”

She hopes to broaden the pilot study’s scope to include people who have mood disorders, anxiety disorders, and substance abuse problems.

“We’re approaching the ability to tailor treatments to what’s unique for each person — each person’s unique ‘flavor’ of depression, or psychotic illness, or anxiety disorder. Unique in terms of what their brain is up to, and also unique in terms of their environmental exposure.”

“There’s no doubt that the University of Minnesota is in the vanguard,” says Redish. “Everybody talks about translation; this is what it’s really about. We truly are translating from fundamental science to helping people.”

As the treatment toolbox expands, it will include newer therapies as well as standbys like medication, group therapy, and psychotherapy. That “subjective” side of psychiatry remains important, Vinogradov says.

“The piece that is about meaning and narrative has always been a quintessential part of psychiatry,” she says. “That’s the ‘art’ of it. And in essence, all good doctors pay attention to that.”

One key research target for Sophia Vinogradov, M.D., is early intervention: delaying or preventing the onset of deteriorating mental illness in adolescents and young adults.

For that work, she earned the 2017 National Alliance on Mental Illness Scientific Research Award in December.

“Nothing has ever meant to me what this award means to me. … I’m moved to the marrow of my bones,” Vinogradov said in her acceptance speech.

Thanks to advances in psychiatry, neuroscience, computer science, and other fields that are helping to develop cognitive brain training therapy for people with early psychosis, the day is approaching when “we can stop that train before it even leaves the station,” Vinogradov says.