University researchers are turning to stem cells to regenerate diseased or damaged tissues and organs, including the heart
By Greg Breining

Regenerative medicine is the physiological equivalent of turning back the clock — by replacing diseased or damaged organs and tissues with healthy, proliferating cells that can restore normal function.

For the first time, we are able to deploy cells as medications. Cells can replace and repair and restore function in the body in a way that drugs and biologicals cannot.

At the core of many approaches to regenerative medicine are stem cells, which have the ability, depending on environment and chemical stimuli, to turn into any kind of specialized cell. Some researchers are working to direct stem cells to take root at the site of an injury and repair or replace damaged tissue. Others are trying to induce specialized cells, such as heart muscle cells, to behave more like stem cells, by dividing and proliferating to replace dead tissue.

Regenerative medicine received a jump-start in Minnesota in 2014 when the Legislature created Regenerative Medicine Minnesota, providing about $4.5 million a year for 10 years for stem cell research and education throughout the state.

Here are a few ways state, federal, and private support has boosted the work of University of Minnesota scientists who aim to enhance stem cells’ ability to heal the body, including our mightiest muscle — the heart. 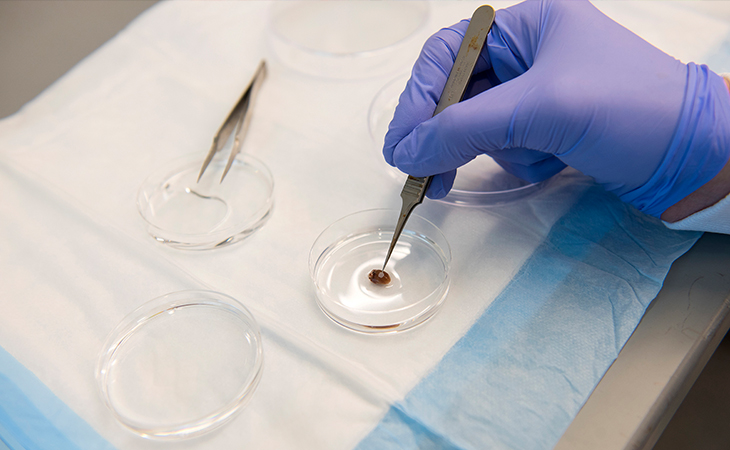 The heart patch for mice is about the size of a sequin. Now the team is working on a larger patch for pig hearts, which are more similar to human hearts. (Image courtesy of Brenda Ogle, Ph.D.)

When scientists discovered they could turn pluripotent (reprogrammable) stem cells into cardiac muscle cells in the laboratory with nearly 100 percent success, they started searching for ways to use these muscle “progenitor” cells to repair heart damage from an injury such as a myocardial infarction.

Initially, they tried growing suitable progenitor cells in the lab and injecting them into the heart near the site of the dead muscle tissue, but they soon discovered that few of these cells took hold to produce living, beating tissue.

Brenda Ogle, Ph.D., an associate professor in the University’s Department of Biomedical Engineering, tried something different. She printed a mesh 3-D heart “patch” of natural collagen and other protein and seeded it with heart cells derived from human stem cells, a technology she describes in a paper published early this year in Circulation Research.

“The impetus comes from our desire to organize the cells before putting them into the heart — that was the idea,” says Ogle, who is a member of the University’s Stem Cell Institute and Lillehei Heart Institute. “If we can organize them and they can propagate a signal from one side of the patch to the other, they should be able to bypass the scar or the injured area.”

But not just any mesh will do. Conventional 3-D bioprinting produces a mesh that’s too coarse; the stem cells don’t settle in and interact with the matrix around them.

Working with colleagues at the University of Wisconsin, Ogle used a printing technique known as multiphoton fabrication to lay down a protein mesh with gaps as small as a single micron (one-millionth of a meter), about 100 times finer than most 3-D bioprinters can produce. “That was the critical part,” says Ogle.

The team implanted the mesh with about 50,000 heart muscle cells, smooth muscle cells, and endothelial cells (which line blood vessels) derived from human pluripotent stem cells. The cells settled into the mesh, spontaneously aligned with one another, and began to contract and relax like normal heart muscle cells — “a very promising outcome,” says Ogle. “When we found that, we knew that here was something we should try to transplant in an attempt to improve function of a failing heart.”

Ogle’s group transplanted patches into mice, placing the sequin-sized mesh over a portion of the heart damaged by a myocardial infarction. After four weeks, more than 11 percent of the transplanted cells had survived and merged with the mice’s heart tissues. Though the hearts did not beat as strongly as normal mouse hearts, the team found a significant increase in function, Ogle says.

Now Ogle is working on a National Institutes of Health grant to perform similar transplants in pigs. She envisions a day, perhaps within just a few years, when the mesh patch is seeded with human pluripotent cells from a stem cell “bank” and implanted in a patient within hours of a heart attack — truly mending a broken heart. 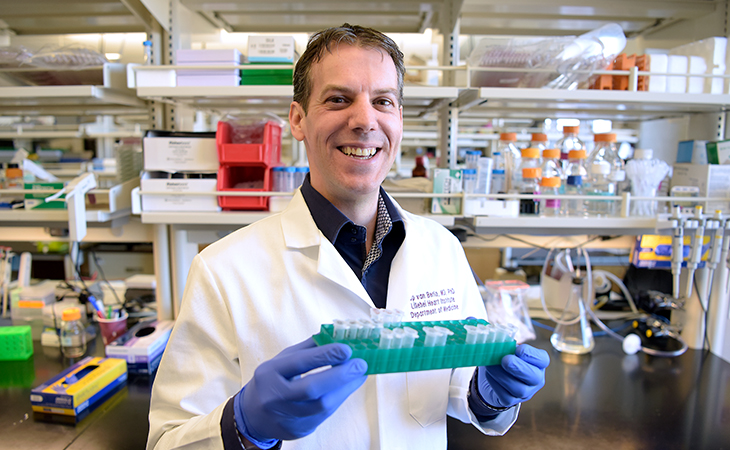 If only humans were more like zebrafish. Then our heart muscle cells could simply generate new cells to repair heart damage.

“It would be really handy, but for unknown reasons it doesn’t happen in our bodies,” says the Medical School’s Jop van Berlo, M.D., Ph.D., who holds the Lois and Richard King Assistant Professorship in Medicine and is a member of the Lillehei Heart Institute and Stem Cell Institute. “As a consequence, we can’t really regenerate from an injury, like myocardial infarction.”

Van Berlo is trying to unlock the genetic pathways that might allow humans to respond more like zebrafish — creating more heart muscle cells to restore a strong, reliable heartbeat. “If we could entice these cells to generate more cardiomyocytes [heart muscle cells] in a relatively short time span, we might be able to regenerate our hearts better after such an injury,” he says.

Among van Berlo’s collaborators is Yasuhiko Kawakami, Ph.D., associate professor in the Department of Genetics, Cell Biology, and Development, who studies the ability of zebrafish to regenerate heart cells. “It’s interesting for me to work with him so that we can see why zebrafish have this ability and mice and humans don’t,” says van Berlo.

Van Berlo recently received a $300,000 award from The Hartwell Foundation to fund exploration of a new treatment for hypoplastic left heart syndrome (HLHS). Children with the congenital defect have underdeveloped hearts with too few muscle cells to pump blood effectively throughout the body — and their bodies are unable to generate more heart muscle cells to take up the slack.

The Hartwell funds will help him test a new approach to adding muscle cells to the heart by unlocking its ability to form new cells — ultimately improving its function. Using computerized high-throughput analysis, van Berlo has identified a number of genes that appear to play a role in regulating heart muscle cell division. He found that switching off these genes stimulated heart muscle cells in culture to begin to divide and multiply. Now he wants to identify which of these genes might be tweaked — either in culture or in the body — to stimulate new heart muscle cell development and help repair the HLHS defect.

“My ultimate goal would be to have this happen inside the body so that you wouldn’t have to take cells out,” he says. “You would essentially just take a pill that would stimulate the progenitor cells to become contractile cells.”

Finding such a drug would unlock the potential to treat many types of heart conditions, from congenital defects to the ravages of a heart attack, by helping the body heal one of its most vital organs.

To support stem cell research at the University of Minnesota, please make a gift today. 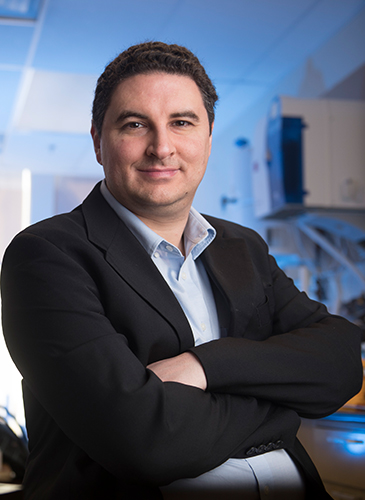 Three-dimensional printing of complex shapes has become an important new medical tech-nology, allowing researchers to quickly and precisely manufacture items as disparate as custom medical prostheses and collagen scaffolds to implant into the body.

Now medical engineers have added a fourth dimension to printing — time. The University’s Michael McAlpine, Ph.D., Benjamin Mayhugh Associate Professor of Mechanical Engineering, is using this 4-D printing to create nanocapsules that can release molecules on cue, much as a cell would, to initiate a biological or other chemical response.

McAlpine and colleague Brenda Ogle, Ph.D., have printed a fine-grained hydrogel mesh embedded with pluripotent stem cells and McAlpine’s tiny capsules. The capsules contain signaling molecules. Some direct the stem cells to turn into cardiac muscle cells; others cause them to differentiate into cardiac blood vessels.

The signaling molecules are trapped in their tiny capsules until McAlpine triggers their release. Inside the polymer coatings of the capsules are gold nanorods. Focusing laser light on the capsules heats the rods, rupturing the coating and releasing the molecules. Nanorods of different lengths respond to different laser wavelengths.

“You can trigger the release of multiple molecules and get sort of this orchestrated series of differentiation events happening,” says McAlpine. “You could use it in the heart to differentiate some cells into muscle tissue versus other cells into a vascular network.”

In March, McAlpine received a two-year, $250,000 grant from Regenerative Medicine Minnesota backing the work. Though the results have yet to be published, he says, “I can tell you that it worked.”

Correcting the muscles that make us move 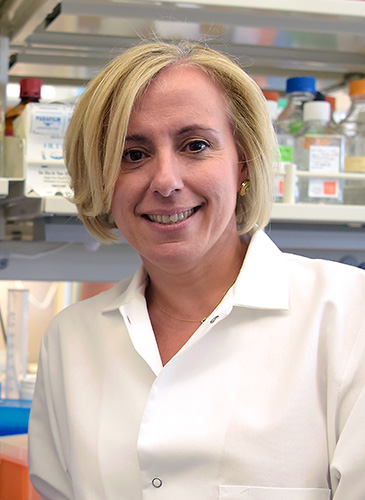 While her University of Minnesota colleagues use stem cells to repair the heart, professor of cardiovascular medicine Rita Perlingeiro, Ph.D., is developing stem cell technology to treat muscle-wasting diseases of the body, including the genetic disease Duchenne muscular dystrophy.

Duchenne is caused by a mutation that leaves skeletal muscle cells with a deficiency of the protein dystrophin, which is necessary to maintain muscle cell integrity. Without dystrophin, or its chemical cousin utrophin, muscles lack strength and leak calcium, with fatal results.

Working with mice modeling a severe form of the disease, Perlingeiro has succeeded in turning a mouse’s own cells into genetically corrected stem cells that become muscle cells, proliferate in the mouse’s muscles by outcompeting the mutant cells, and restore muscle function, effectively curing the disease.

“We are able to show restoration of the protein that was missing in these mice,” says Perlingeiro, who is also a member of the University’s Lillehei Heart Institute. “The cells were able to restore muscle function.”

Perlingeiro has accomplished this by a three-step process she developed in 2013. First, she collected skin cells from a mouse’s tail and “reprogrammed” these specialized cells into induced pluripotent stem cells that have the potential to become any kind of cell in the body.

Next, she used a gene editing technique to insert utrophin into the gene. This step corrects the harmful mutation.

Finally, Perlingeiro was able to use a protein known as PAX7 to induce the genetically repaired stem cells to turn into specialized muscle cells. These healthy muscle “progenitors” were injected back into the mice, where they infiltrated the muscles and proliferated, replacing the mouse’s deficient cells.

In a study published this year, Perlingeiro reported taking the process a step further. In human patients, she says, it will be vital to transplant only the gene-corrected stem cells that will become muscle cells. The wrong cells might produce unwanted teratomas, or tumors. She and her colleagues have identified three distinctive proteins that identify stem cells as muscle cell progenitors.

“This recent work is really an important step moving forward for therapeutic application into patients,” she says.

The next step will be moving the technology toward clinical safety trials for human patients. Private philanthropy has allowed her lab to secure grants from the National Institutes of Health and the Department of Defense.

“Philanthropy has really been key in our research,” she says. “If we didn’t have this funding, I wouldn’t be doing it.”

Wagner to lead new U Institute for Cell, Gene, and Immunotherapy

John E. Wagner Jr., M.D., will connect the U of M’s work to industry and the community and further establish the University as a leader in this field.