Can we turn back the clock on aging?

Living longer certainly sounds appealing, unless it simply means more years of dealing with the ills and ailments of old age.

At the University of Minnesota Medical School, researchers are working toward a better option: a prolonged period of healthy life before the onset of diseases commonly associated with aging. Instead of a longer lifespan, this lengthened “healthspan” would mean more years to work, travel, and pursue an active lifestyle. Dementia, cardiovascular disease, osteoporosis, and other disabling conditions would be delayed — or possibly prevented.

A healthier old age is looking increasingly possible, says Laura Niedernhofer, M.D., Ph.D., director of the U’s new Institute on the Biology of Aging and Metabolism (iBAM), where she and colleagues are working to develop drugs that slow aging at the cellular level. Called senolytics, these drugs would offer huge benefits across society, Niedernhofer says. More than 90 percent of people over 65 have one chronic disease, she says, and 75 percent have two or more chronic diseases; 10,000 people in the U.S. turn 65 every day.

“That’s a lot of sick people and it just robs quality of life, not only for them but for their family members who are caretakers,” Niedern-hofer says. “What we’re aiming to do is work very aggressively on developing therapeutics that target fundamental aging processes with the hope that they would then slow or prevent or attenuate the whole suite of diseases we expect in old age, from cancer to Alzheimer’s.”

Historically, research efforts to extend life focused on attacking one aging-related disease at a time, says S. Jay Olshansky, Ph.D., an aging expert at the University of Illinois, Chicago, but discoveries in recent years have started to make biological aging seem like less of an inevitability. Instead, experts are increasingly looking to delay the point at which our bodies begin a rapid decline toward frailty and disease. “We want an intervention that will allow us to take 80 years to become 60,” Olshansky says.

Paul Robbins, Ph.D., iBAM’s associate director, has seen his career mirror the field’s overall shift in thinking — from dealing with aging-related diseases after the fact to slowing their progression before they begin. His early interest was in gene therapy — looking for ways to correct genetic defects or transfer genes to treat diseases like rheumatoid arthritis and diabetes. Then, about 15 years ago, he started to find evidence that similar molecular processes drove the development of all sorts of aging-related diseases.

He switched gears to focus on those molecular processes, which can be tinkered with to cause either age-related diseases or extreme longevity in a variety of animal models, including fruit flies, mice, and worms. “There were certain types of mutations that made their lives shorter,” he says, “and certain similar mutations that allowed them to live longer.” Those mutations also have parallels in human centenarians, suggesting that senolytic drugs could target the same processes in people, permitting them to live longer, healthy lives.

Over the same period, Niedernhofer’s research produced a striking discovery that made an age-slowing approach seem even more feasible. To better understand the health consequences of DNA damage, she knocked out a gene in mice that codes for a DNA-repair enzyme. Without the ability to fix their DNA, the rodents aged six times more quickly than normal. In people, she found, related mutations cause a rare disease of accelerated aging.

Now, Niedernhofer and Robbins had both a feasible idea and an animal model for investigating the biological processes that drive aging. Lured by iBAM’s commitment to aging research, the duo, both leaders in their field, moved from the Scripps Research Institute in Jupiter, Florida, to the U of M Medical School, where they are professors in the Department of Biochemistry, Molecular Biology, and Biophysics.

Their recruitment resulted from a $30 million initiative launched by former Gov. Mark Dayton and the state Legislature in 2014–15 that created four Medical Discovery Teams in the Medical School, including iBAM, to improve patient and population health, lower medical costs across the state, and fortify the Medical School’s preeminence. 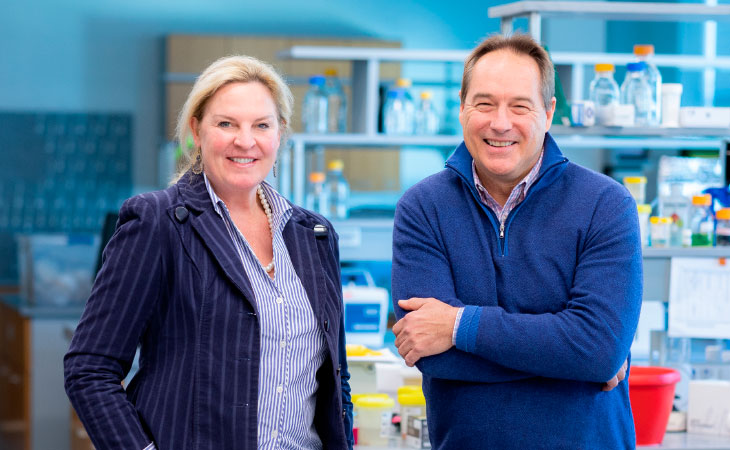 At iBAM, one major focus targets senescent cells, which form in our bodies in response to stress. Senescent cells do the important work of suppressing tumor formation by preventing damaged DNA from replicating, but senescent cells also accumulate with age, as our bodies get worse at getting rid of them. While they hang around, senescent cells release molecules that induce a state of chronic inflammation, which has been linked to many of the health consequences of aging, like slower recovery from surgeries.

For a 2015 study, Niedernhofer and Robbins, along with colleagues at the Mayo Clinic, developed the first drug to kill senescent cells. They gave mice an existing cancer medication called dasatinib, along with a common plant pigment called quercetin, and found that the old rodents maintained a healthy gait, stronger heart function, and the ability to exercise longer. A single dose was enough to slow the aging process.

Since then, the scientists have pushed the possibilities even further. In one study, published in 2018, iBAM researchers and colleagues at Mayo found that transplanted senescent cells caused physical decline in young mice and reduced survival in older mice. But the effect was reversible: a senolytic cocktail of dasatinib and quercetin lowered the load of senescent cells and the inflammatory molecules they produce. The drug also improved physical abilities, such as walking speed and muscle strength. And it lengthened the rodents’ lifespans by 36 percent. In another 2018 study, the group reported similarly encouraging findings with another plant compound, called fisetin, even if the medications were given to the mice later in life — the equivalent, Niedernhofer says, of treating a 75-year-old human.

Although mice are not people, evidence is adding up to support the powerful potential of new medications to defer aging, Niedernhofer says. She and Robbins continue to work with collaborators at Mayo to develop new drugs that interfere with what Robbins thinks are just a handful of pathways involved in aging. They are also working to fill in more details about the fundamental processes that drive aging in order to collect new insights that will inform drug development. One hope is to create medications that would target specific locations, like the brain or immune system.

The first clinical trial of a different type of drug with anti-aging potential is scheduled to begin this year. Called TAME and developed with guidance from the iBAM directors, the trial is examining whether Metformin, a diabetes drug that has shown promise for delaying the onset of multiple age-related diseases, might be able to delay the development of cancer, heart disease, and cognitive decline in all older adults, not just people with diabetes. The University of Minnesota is one of 14 sites where the TAME trial will take place. Metformin is not a senolytic, as it doesn’t target senescent cells, but it could get at the heart of aging. And, depending on its results, the trial could transform old age — and soon. “The first drug for aging could be here in the next five years,” Robbins says.

Niedernhofer sees the research as a necessity, not a luxury. “If we don’t do something,” she says, “we’re in a world of trouble because there are literally not enough beds in nursing homes or independent living facilities to accommodate all of the aging baby boomers.”

Although hype has been building, it is too soon to recommend that people start self-medicating to fight aging, she adds. Plenty of details remain undetermined about what form the medication will take, how often people will get it, or who will be the target patient population. New medications will also have to be tested exhaustively for safety, but startup companies are increasingly interested in investing in senolytic drugs, says Robbins. One of the first groups to benefit might be cancer patients, who tend to accumulate extra senescent cells and experience accelerated aging from harsh treatments. Initially, the drugs will also likely be geared toward people who already are showing signs of unhealthy aging, having two or more age-related diseases.

Given the cutting-edge research happening at iBAM, the next major breakthrough in senolytics is likely to happen in Minnesota, Olshansky says. The availability of drugs that slow aging, he adds, is a matter of when, not if.

“When it does happen — when some research team somewhere across the globe develops a therapeutic intervention to modulate aging — it will probably become the most important medical discovery in this century because of the breadth of its impact on humanity,” he says. “It will make a cure for cancer seem like a minor development.”

Make a gift to this research today, or contact Jean Gorell of the University of Minnesota Foundation at jgorell@umn.edu or 612-625-0497 to find out how your support can make a difference.

The Medical School is expanding its commitment to educating and training today’s physicians to care for tomorrow’s geriatric patients — those over age 60.

Jakub Tolar, M.D., Ph.D., Medical School dean and vice president for clinical affairs, says the revitalized relationship between the University and Fairview Health Services provides a prime opportunity to create an integrated system of care for seniors, whose numbers will double by 2030.

“Throughout the University, we have extensive knowledge of the biology, psychology, and other aspects of aging — and we educate 70 percent of the state’s primary care physicians,” says Tolar. “Our family medicine leaders are collaborating with experts across many fields to develop state-of-the-art geriatrics care training programs and to deliver coordinated care for seniors through our expanded network of primary care sites.”

A wider network is just part of the plan, says James Pacala, M.D., a geriatrician and head of the Department of Family Medicine and Community Health. “We need a different approach to adapt to the varying needs of geriatric patients, from the 90-year-old super-athlete to the 60-something patient with 18 medical conditions and 25 drugs.”

Tolar and Pacala envision drawing on faculty experts in aging from the University’s schools of medicine, public health, and nursing; pharmacology; physical therapy and rehab; dentistry; as well as social work and other programs. This comprehensive effort, says Pacala, will serve as an engine for training and research that will benefit older patients, their families, and caregivers.

Though still in the planning phase, the initiative has drawn the support of the Otto Bremer Trust, which recently awarded the University a $1 million grant to develop integrated education for all types of students — not just future geriatricians — who will deliver care to older patients.

The Medical School plans to use the Otto Bremer support to provide geriatrics training for primary care clinics and to develop a telemedicine program that reaches older adults in their own communities, says Tolar. “I’m confident we can transform care for this growing population.”

Medical School Dean Jakub Tolar, M.D., Ph.D., reflects on the U of M’s “truly extraordinary” response to the COVID-19 pandemic.

Technologies and resources will give patients choices and physicians the tools to provide personalized care to a degree we now only dream of.