When President Barack Obama declared a new “Cancer Moonshot” initiative in his final State of the Union address, he put a refreshingly positive spin on former President Richard Nixon’s 1971 “War on Cancer.” 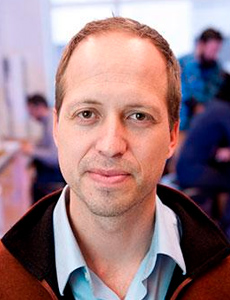 A private company cofounded by Reuben Harris, Ph.D., aims to develop a novel cancer therapy based on his lab discoveries. (Photo: Scott Streble)

Reframing the effort to cure cancer seems wise. The War on Cancer conjures up other “wars”— on drugs, on terrorism, on poverty — all decades-long battles that have seen questionable progress. But the hopeful optimism of a “moonshot”? Heck, everybody knows the moonshot was a spectacular success, a giant leap for mankind.

Vice President Joe Biden was tapped to lead this Cancer Moonshot and, in an address to researchers around the country this past July, said, “We’re on the cusp of great change.” It’s possible, he continued, that we can indeed forge ahead and make 10 years of progress in the next five.

But how exactly will that happen? For University of Minnesota researchers, one important part of the answer is continuing to make new and stronger partnerships with private biotechnology companies to deliver breakthrough cancer therapies to patients faster. That, after all, is what drives the work of the Masonic Cancer Center’s scientists.

“Many people assume that the kind of fundamental research that happens in places like the University of Minnesota should translate immediately into new cancer drugs,” says Masonic Cancer Center member Reuben Harris, Ph.D., a professor in the Department of Biochemistry, Molecular Biology, and Biophysics. “But it’s a very long road from a fundamental discovery in the lab to delivering something measurable to the clinic — usually five to 10 years.”

Harris, a Howard Hughes Medical Institute Investigator and holder of the Margaret Harvey Schering Land Grant Chair for Cancer Research, spends his days focused on “moonshot” research. He recently identified a predominant cause of cancer-producing mutations within the human body. Discovering this source of mutations — enzymes known as APOBECs — was a leap forward for Harris, who together with Masonic Cancer Center colleague Daniel Harki, Ph.D., and entrepreneur John Santini, Ph.D., has started a private company called ApoGen Biotechnologies Inc. They envision developing a cancer therapy that will inhibit the mutations caused by APOBECs in tumors.

Keep in mind that while scientists like Harris oversee sizable research labs, they’re also training the next generation of scientists in the classroom, writing scientific papers, presenting their findings at conferences around the world, writing grant requests, and doing service work. That makes having an outside company with dedicated nonacademic personnel necessary for translating a fundamental discovery to a new therapy. 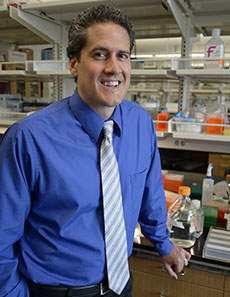 David Largaespada, Ph.D., has cofounded three private companies to help get his lab discoveries to the marketplace—and thereby to patients. (Photo: Scott Streble)

“Public/private partnerships are absolutely critical to developing cancer therapies,” agrees David Largaespada, Ph.D., the Masonic Cancer Center’s associate director for basic sciences and a professor in the departments of Pediatrics and Genetics, Cell Biology, and Development, who works to identify cancer-causing genes.

“The relationship goes both ways: basic discoveries made in labs like mine can identify pathways to therapies, which private companies then end up producing,” he continues. “Then, the company often gives the molecules — the therapies — they develop back to scientists like me to test in new ways and in new situations. It’s a back-and-forth process that really works.”

It works because developing compounds for use as treatments in humans is complex and expensive, something universities are rarely set up to do alone.

And once private industry has developed a drug that’s ready to test, it needs access to patients, and it needs physicians with the expertise to set up and run clinical studies successfully.

Largaespada has cofounded three private companies: Discovery Genetics, which focused on developing gene therapies and was recently purchased by another company; NeoClone, which makes antibodies; and B-MoGen Biotechnologies, a gene-editing start-up. He is also a scientific adviser for Recombinetics, a St. Paul company focused on gene editing in food animals.

“Spinning out our discoveries from the lab into private companies is another way we can take what we’ve learned and get it into the marketplace where it can help people,” says Largaespada, who holds the Hedberg Family/Children’s Cancer Research Fund Chair for Brain Tumor Research.

Basic discoveries made in labs like mine can identify pathways to therapies, which private companies then end up producing. Then, the company often gives the therapies they develop back to scientists to test in new ways and in new situations. It’s a back-and-forth process that really works.

The National Cancer Institute has long promoted these public/private partnerships, and the University’s Office for Technology Commercialization exists to help move innovative lab discoveries into the public realm.

Jeffrey Miller, M.D., deputy director of the Masonic Cancer Center and holder of the Roger L. and Lynn C. Headrick Family Chair in Cancer Therapeutics, knows firsthand how the process works. He’s currently involved with two private companies that are developing cancer treatments based on his research.

“These types of partnerships involve two key components,” Miller explains. “First, the company agrees to further research and develop the technology they’re licensing into a product that can be commercialized. And, second, they agree to fund human clinical trials, which can be enormously expensive.”

Miller’s large research lab focuses on the potential of natural killer (NK) cells, which are important mediators of the body’s natural anticancer immune response. He and his team have discovered a specific type of NK cell, called an adaptive NK cell, that kills cancer more effectively than conventional NK cells. Miller’s team has also learned how to arm those adaptive NK cells, aim them at cancer cells, and keep the NK cells alive long enough to destroy the cancer cells.

Last year, Fate Therapeutics, a biopharmaceutical company focused on developing immunotherapies for cancer, and the University entered into an agreement to take Miller’s NK cell discoveries to the next level. They hope to begin clinical trials with a new cancer immunotherapy in the first quarter of 2017, Miller says.

“These licensing agreements are absolutely essential to progress,” says Miller, “because in addition to funding the clinical trials, they fund the drug invention and help fund further research for product improvement. Basic research will only take us so far.” 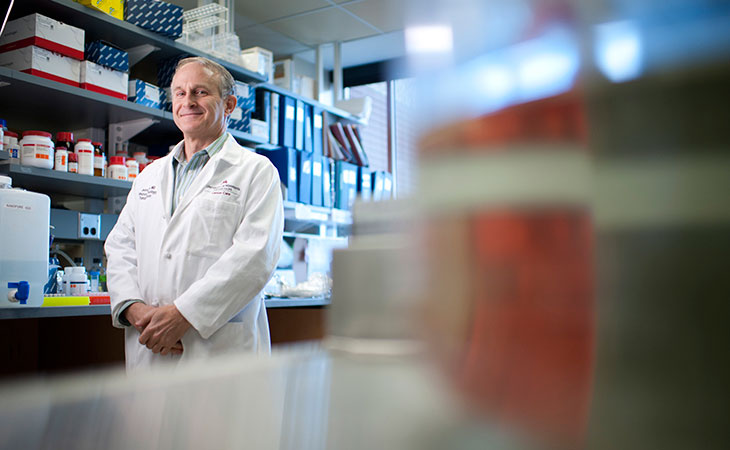 The urgency of now

President John F. Kennedy’s original moonshot — land a man on the moon by the end of the 1960s — was arguably less complicated than the Cancer Moonshot; after all, scientists don’t have to cure just one cancer, they have to cure 200 known types of cancer. Every one may require a different “cure.”

As Miller says, science is advancing rapidly; anything that helps break down barriers and accelerate the process will be welcomed by scientists.

“I’ve been doing this work for 25 years,” he says, “but in the past five, I’ve seen the area of cancer immunotherapy absolutely explode. We’re seeing companies developing immunotherapy products that are now making their way into clinics. That’s what happens once these partnerships are forged.”

With the Cancer Moonshot embracing the urgency of now, scientists like Harris, Largaespada, Miller, and their teams are nothing but hopeful, and they’re ready to pick up the pace, just as fast as the system will allow.

“Reuben and Jeff and many others here at the U have great experience bringing their discoveries from lab to clinic,” says Largaespada, “and we all play multiple roles. But a shared vision, a desire to help find the ways to end cancer, really holds us together.”

Finding a cure twice as fast

Together, they generated ideas and commitments that will accelerate advances in cancer research, prevention, treatment, and survivorship — all part of the national effort to double the rate of progress toward a cure. 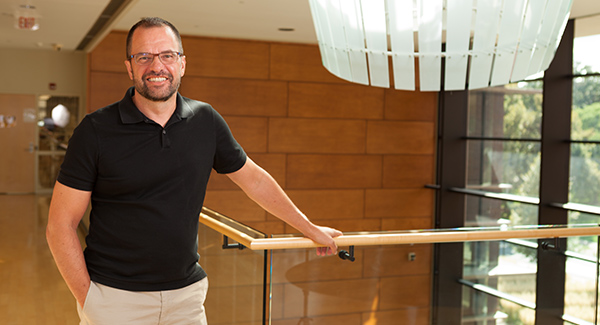 Daniel Voytas, Ph.D., director of the U of M’s Center for Genome Engineering, is just the kind of scientist Vice President Biden wants on the Cancer Moonshot team. Voytas has stirred excitement internationally for his plant engineering research. In the process of editing plant genes to create things like reduced-gluten wheat and disease-resistant soybeans, he codeveloped a targeted genome editing method called TALENs, which Science magazine named one of 2012’s top scientific breakthroughs—and which is now also being used to develop treatments for cancer.

“I’m a plant scientist, but others are successfully using TALENs to engineer our immune systems to fight cancer,” says Voytas, who cofounded Calyxt, a biotechnology company focused on creating healthier crop varieties. Given his success so far, Voytas will no doubt continue to advance the fight against cancer—he’ll just be doing it from a soybean field.

New Masonic Cancer Center research has revealed genes and pathways that, when altered, can cause osteosarcoma.