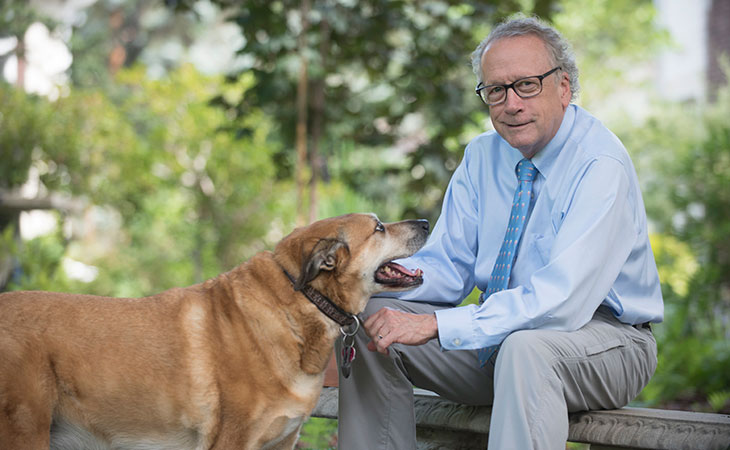 A career built on compassion

In 1999, Steven Miles, M.D., decided to run for the U.S. Senate. His central concern? Affordable health care. Too many people, as he saw it, were forgoing critical medical care because they couldn’t afford it. So the University of Minnesota professor and physician entered the race as a Democrat and began touring the state to solicit votes.

Miles never made it to Washington, but he fondly recalls his time on the campaign trail. “I was struck by the incredible intimacy of campaigning,” he says. “You have extraordinary conversations with people. I learned so much by listening.”

Friends and colleagues say that Miles, who will retire from the U faculty at the end of the academic year, has always been a good listener. He rarely interrupts. He asks incisive questions. And above all, he is empathetic. As a teacher, caregiver, researcher, and mentor, Miles has always led with compassion, his fans say.

Miles earned his medical degree from the University’s Medical School in 1976 and has worked at the U for 35 years. A longtime professor in the Division of General Internal Medicine, he also holds the Maas Family Endowed Chair in Bioethics and serves as an affiliate faculty member for the Law School’s concentration in health law and bioethics.

He has served as medical director of the Minneapolis-based American Refugee Committee and has written four books, including one on the Hippocratic Oath and another about the role of doctors involved with torture practices. At last count, Miles had visited 82 countries — and had worked with refugees in Asia, Africa, and Europe.

Steve’s work makes a genuine difference in people’s lives. He provides leadership on very controversial issues that most bioethicists don’t address. He’s not at all deterred by the heat he takes as a result of his positions or research. His work displays a lot of courage.

“Steve’s work makes a genuine difference in people’s lives,” says Debra DeBruin, Ph.D., an associate professor with the U’s Center for Bioethics. “He provides leadership on very controversial issues that most bioethicists don’t address — for example, the complicity of health professionals in torture, ending gun violence, and testing untested rape kits. He’s not at all deterred by the heat he takes as a result of his positions or research. His work displays a lot of courage.”

Sitting on the patio outside his Minneapolis home on a recent morning, Miles spoke quietly as he tallied the accomplishments that make him most proud. He helped develop the Do Not Resuscitate order and an internationally used protocol for treating tuberculosis in refugee camps. He successfully pushed for getting rid of restraints in nursing homes and sat on the committee that helped design MinnesotaCare.

What accounts for his success? “The truth is, I’m a lousy networker and not very sociable,” Miles says with a smile. “But I know how to collate critical bits of information and then distill a simple, clear policy design from them. Simplicity is key to the solutions I’ve helped develop.”

Miles’ commitment to changing the world one issue at a time has inspired countless students. Arthurine Zakama, who met Miles when she was in high school, says she decided to go into medicine because Miles encouraged her to reach for her dreams. “He’s an amazing mentor,” Zakama recalls. “He always took the time to talk to me, write letters of recommendation, and offer advice.”

Allison Whelan, a graduate of the U’s M.A./J.D. program in bioethics, echoes such praise. “Dr. Miles is, without a doubt, one of the best professors and mentors that I have had in my academic career,” says Whelan. “His door was always open. He went beyond the call of duty to help me academically, professionally, and personally.”

Miles says he tries to treat his students with respect. “I want them to mature to their full potential, beyond any class where we happen to meet,” he says. He attempts to answer every student email, he says, and corresponds with many former students.

His students find him to be open and real: Years ago, shortly after he was diagnosed as bipolar, he disclosed his struggle with mental illness to one of his classes. “I said, ‘You can get help and have a successful career in medicine, as I have,’” he recalls. “‘But you will have to educate your classmates.’ You could’ve heard a pin drop.”

The truth is, I’m a lousy networker and not very sociable. But I know how to collate critical bits of information and then distill a simple, clear policy design from them. Simplicity is key to the solutions I’ve helped develop.

Much has changed in medicine over the course of 35 years, notes Miles. “Technology now makes it possible to do literature research at a level we’d never dreamed of before,” he says. But he worries that technology can become a barrier between physicians and patients. “The electronic chart has improved information flow and given us access to tremendous amounts of data. But it has also prompted young doctors to stand behind a screen rather than risk relating with their patients and their families.”

To nurture their empathetic sides, Miles encourages his students and colleagues to read novels and listen to music. Listening to jazz and reading authors like Jane Austen have helped make him a better person, he says, and thus a better physician. Not surprisingly, he plans to spend more time in retirement engaged in both activities, as well as gardening, cooking, and enjoying his grandchildren with his wife of 35 years, Joline Gitis.

Leaving the U will be bittersweet for Miles, who says he’ll miss the students and patients. But he hasn’t had second thoughts about moving on. “There’s no point in dying on the job,” he jokes. “That would be a waste of a perfectly good retirement.”

Steven Miles, M.D., plans to spend more time in his garden and with his family, including his dog Freesia, in his retirement. (Lead photo: Scott Streble)

Miles discusses health disparities and possible ways to address them.