From calculus and probability theory to statistics and algebraic geometry, mathematics has become one of medicine’s most powerful tools
By Barbara Knox

“The great book of nature,” Galileo once reportedly said, “can be read only by those who know the language in which it was written. And this language is mathematics.”

So true, agree scientists and mathematicians of all stripes at the University of Minnesota. Indeed, in the early 21st century, mathematicians have emerged as some of medicine’s greatest unsung heroes, powering through thorny problems in cancer and genetics, shedding light on complex biological processes, and analyzing mountains of data, all with the goal of helping doctors improve outcomes for patients.

“Math is a powerful tool that allows us to understand physiology in a very precise way,” says Fadil Santosa, Ph.D., professor of mathematics and director of the U’s Institute for Mathematics and its Applications (IMA), “and it will continue to accelerate progress in the life sciences — the applications are limitless.”

Santosa has watched it happen in his more than 15 years at the IMA, where the mission emphasizes collabora-tion between mathematicians and research scientists to solve real-world problems. In the works right now, for instance, is a project — in partnership with Medtronic — to develop an artificial pancreas that will actually learn from the host patient via a math model designed by the IMA, then deliver medication based on carefully constructed algorithms.

“Math is a powerful tool that allows us to understand physiology in a very precise way, and it will continue to accelerate progress in the life sciences.”

How will we use our ever-increasing terabytes of raw data to understand disease and dysfunction in the human body? Using mathematics, is it possible to make predictions about how illness progresses, then alter the course of treatment to attack, with precision, when the body is most receptive? Somewhere in those mountains of data, are there cures to diseases waiting to be unearthed?

Behold the power of mathematics in medicine.

Dan Knights, Ph.D., gets more attention for his celebrity status as a champion Rubik’s Cube “speed-cuber” — his best time solving the 3-D puzzle is 11.93 seconds — than he does for his work studying microbial communities of the human gut, but, really, who can blame folks for wanting to hear more about the time he solved a cube while free-falling from 12,000 feet than how he extracts DNA from fecal samples? It might not sound sexy, but, in truth, Knights’ work is fascinating. His University lab — he’s an assistant professor in the Department of Computer Science and Engineering —  focuses on what he calls “hacking the microbiome.”

“We look for patterns in the microbial communities in the gut that link to various diseases,” he explains, “and we use those patterns to help develop better therapeutics and diagnostics.”

Knights relishes the hard problems — to wit, speed-cubing in free fall — so working to identify every one of the hundreds of species of microorganisms teeming inside the human gut is a welcome challenge.

Consider: Each of us carries about 100 trillion microorganisms in our own guts, so the job of identifying an individual species — then figuring out its specialized role — is enormous. Knights’ approach is to take fecal samples, grind up all of the DNA together, then sort out individual bugs. The result? Massive amounts of data, including huge DNA sequences, that need to be categorized, modeled, and compared with others.

“This is a fairly new field that’s growing quickly,” says Knights, “and new discoveries here rely heavily on math and computational modeling. So it’s a fun way to apply my problem-solving skills in a way that will potentially have a real impact.”

We already have some understanding of just how impactful increased knowledge of the microbiome could be. A case in point: Several years ago, University gastroenterologist Alexander Khoruts, M.D., completely cured —  within hours — a woman suffering from the crippling gut infection Clostridium difficile by transplanting a sample of her husband’s healthy microbiome into her colon; many similar transplants since have been equally successful.

Knights ticks off more examples of disabling conditions that might be avoided or cured as scientists learn to identify and correct problems in the microbiome: blood infections in chemotherapy patients, asthma and allergy problems in children treated with antibiotics in infancy, bowel diseases … his list even includes new tools to help medical examiners pinpoint time of death based on gut bugs’ activity.

Ultimately, knowledge of the gut microbiome could result, Knights says, in something like a probiotic cocktail that could rebalance a system out of whack. To get there, Knights and other scientists like him will keep turning to mathematics. 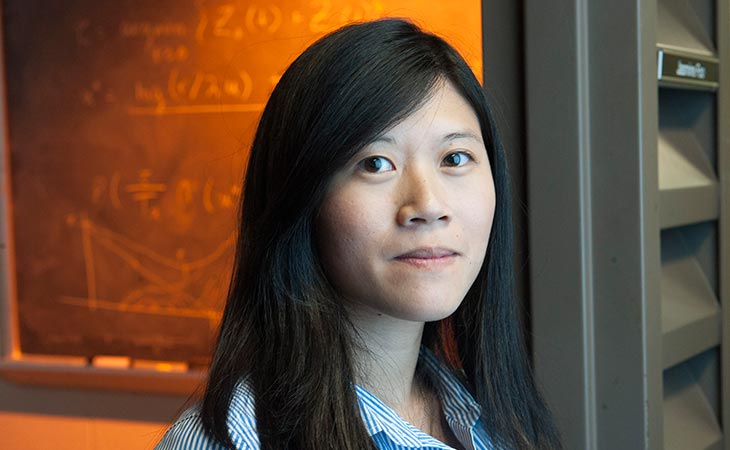 For decades, research scientists have focused with laser-like intent on developing new anticancer drugs to treat the 14 million or so people around the world who are diagnosed with cancer annually. But in quiet offices far removed from research labs, mathematicians have been asking a critical question: “While we wait for discovery of the next big drug, can we do better with what we already have?”

It seems almost too simple: modify a drug’s dosage, alter the timing of its delivery, and improve the patient’s outcome. Clinical studies currently under way across the country are finding that it works.

“When we understand better how tumors evolve, and how resistance to drug therapy evolves,” says Jasmine Foo, Ph.D., a 2013-2015 McKnight Land Grant Assistant Professor in the U’s School of Mathematics, “then, ideally, we can design more effective combinations of therapies.”

“When we understand better how tumors evolve, and how resistance to drug therapy evolves, then we can design more effective combinations of therapies.”

Foo is a quantitative modeler who relies heavily on probability theory, or the study of randomness, to do just that. Working with a cell biologist, she gathers extensive amounts of data about a particular cancer. How big is the tumor? What does the tumor micro-environment look like? How many days after treatment does resistance begin? What does that resistance look like?

Sometimes she works in the lab to get a better understanding of the data, but mostly her tools are simple: chalkboard and chalk, paper and pencil, computer. As she builds her math model, answers start to emerge. And those answers, says Foo, can help foil cancer cells’ wily ability to dodge anticancer drugs.

In a clinical trial at Memorial Sloan Kettering Cancer Center in New York, doctors are finding that a new treatment regimen for non-small cell lung cancer based on Foo’s math model works more effectively than the previously accepted protocol.

Her models can also help guide surgeons who are removing tumors, by providing information about the size and geometry of the premalignant tissue field around the tumors, which can vary greatly from cancer to cancer.

“Ultimately, our hope is to develop interdisciplinary platforms that can be fine-tuned to different types of cancer,” says Foo, who is a member of the Masonic Cancer Center, University of Minnesota. “That’s another great thing about using math modeling to design new treatments using existing drugs: an experimentalist would have to retool the entire lab, but I can just change the parameters of the model to look at different cancers.” 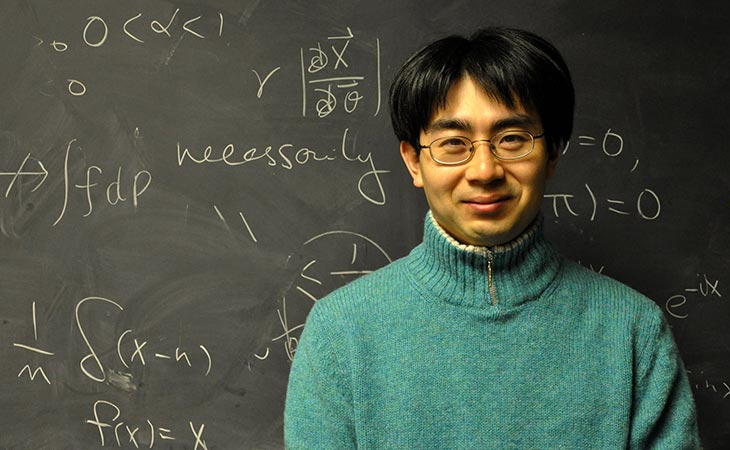 Associate professor of mathematics Yoichiro Mori, M.D., Ph.D., makes an important point when he says that this new era of math biology is not just a one-way street, with mathematicians giving and medicine taking.

“Thinking about physiological problems — medical problems — can lead to new mathematics and really vitalize applied mathematics,” says Mori, who has a passion for math that ultimately lured him away from practicing medicine after he finished his M.D. training in Japan.

Armed with his newfound knowledge of physiology, Mori migrated into mathematical biology, digging deep into electrophysiology, the study of electrical activity in the body.

It’s a major area of research, because electricity orchestrates many of the body’s critical functions: the beating of the heart, communication in the brain, vision and hearing, muscle movement.

“Electrophysiology is one of the older fields of study in mathematical biology,” explains Mori, who builds math models to determine exactly how electrical signals are propagated throughout the heart, and what it looks like when things go wrong.

“You start by writing down equations to make sense of it mathematically,” he says, “then begin building computer models that help us understand things like arrhythmias and show us how we can intervene medically to prevent fatal attacks.”

Lately, Mori’s focus has shifted to the brain, a world filled with un-answered questions for researchers. He’s studying migraines, a debilitating condition that’s estimated to affect more than 10 percent of the world’s population, making it a problem more widespread than diabetes and asthma combined.

Mori believes that understanding a brain phenomenon called cortical spreading depression (CSD) is key to cracking the mystery of the migraine. Essentially, CSD is a wave of repressed electrical activity that moves very slowly through a portion of the brain, rendering all of the electrically excitable neurons completely inactive. While CSD doesn’t appear to do permanent damage — cells bounce back as the CSD recedes — the incident is known to cause the “visual auras” that precede migraine headache in many patients.

The work is painstaking. As Mori points out, CSD was first described more than 70 years ago, and scientists still don’t fully understand why it happens or, more importantly, how to make it stop. But tackling it with mathematics is the best way to clarify the basic physiology, which lays the groundwork for intervention.

Mori, Knights, and Foo are just three among the U’s veritable army of mathematicians, computational biologists, biostatisticians, and other specialists working to solve tough medical problems with math.

“There’s such a strong environment here at the U for this kind of work,” says Santosa, “and the IMA is committed to enabling strong collaborations, to keep driving the innovations, to inventing new math to make the models we need to illuminate human physiology.” It seems that Galileo had it right when he also said, “If I were again beginning my studies, I would follow the advice of Plato and start with mathematics.”