Brain tumors are an aggressive and wily form of cancer. They can develop tentacles and spread into different regions of the brain. Adding to the complexity, each cancer cell within one tumor mass is unique from its neighbor, thanks to a multitude of mutations. Plus, the blood-brain barrier prevents many therapies from even reaching the tumors.

These are a few of the reasons why brain tumors are difficult to treat and why there is currently no cure. Brain cancer is the leading cause of cancer-related deaths in children. For glioblastoma, the most aggressive brain tumor, survival is typically just more than a year.

These sobering facts motivate a team of University of Minnesota Medical School researchers to find new ways to attack brain tumors. Michael Olin, Ph.D., one member of that team, also has a very personal motivation for his work: his mother died from cancer that metastasized to the brain, an experience that sparked his interest in developing new strategies to outsmart the disease.

A neuro-immunologist and assistant professor of pediatric hematology-oncology, Olin works with his U of M and Masonic Cancer Center colleagues Christopher Moertel, M.D., and Elizabeth Neil, M.D., to develop treatments that train a person’s own immune system to fend off brain tumors. 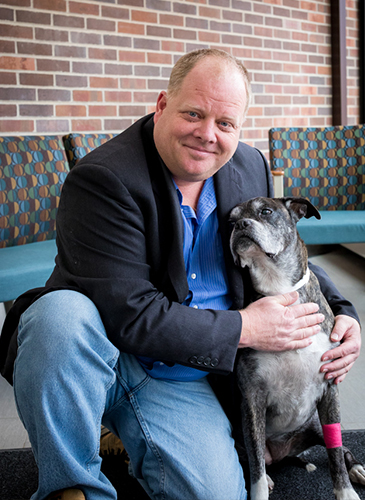 Michael Olin, Ph.D., with canine study participant Gidgett, is working with Christopher Moertel, M.D. (below), to perfect a human brain tumor immunotherapy for a clinical trial that could open as soon as this winter. (Photo: Brady Willette)

A 2012 clinical trial of a University of Minnesota–developed immunotherapy made from brain cancer cells showed initial successes. It performed admirably to prolong adults’ and children’s lives by preventing their tumors from returning. But the progress was short-lived, and the tumors eventually came roaring back.

Olin was determined to find out why this therapy succeeded initially, then failed. He painstakingly compared blood samples taken weekly from study participants. He was evaluating a long list of blood proteins one by one when he noticed slight changes in levels of the protein CD200, also known as OX2.

Patients who didn’t respond to the immu-notherapy at all had sky-high CD200 levels. Those who responded well had low CD200 levels initially but high levels when the tumors returned.

This observation led to an important revelation about the little-known protein: it plays a starring role in suppressing the immune system and perpetuating brain cancer.

“It was our theory that CD200 was the reason the tumors returned,” says Moertel, a pediatric neuro-oncologist at University of Minnesota Masonic Children’s Hospital and holder of the Kenneth and Betty Jayne Dahlberg Endowed Professorship in Pediatric Brain Tumor Research. “It turns out that CD200 is an important immunosuppressant agent that tumors make to escape discovery by the immune system.” 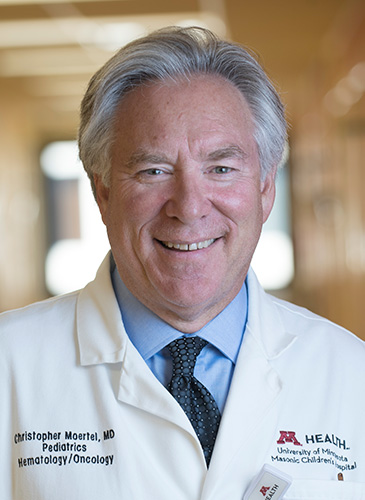 Previous scientific inquiry into CD200’s role in the immune system hadn’t made much progress. However, it was established that CD200 acts as an immune checkpoint that prevents the immune system from attacking tumors. When the U of M team began doing experiments, they found that using the immunotherapy in mice while blocking CD200 made the rodents’ brain tumors disappear.

Encouraged by the results, Olin began analyzing CD200 more closely and got even better news: not only does blocking CD200 keep tumors at bay, it also prompts its transformation from bad cop to good cop. Olin found that chains of amino acids called peptides turn on the CD200’s unique activation receptors, switching the protein from perpetuating cancer to fighting it. Using the CD200 peptides turns off the CD200 checkpoint, allowing the immune system to do its job and fight the cancer.

Moertel and Olin then partnered with Liz Pluhar, D.V.M., Ph.D., a professor in the U’s College of Veterinary Medicine, to test their CD200 hypothesis on dogs with naturally occurring brain tumors. Canine and human brain tumors are very similar, as are the canine and human immune systems. The team extended dogs’ lives by as many as 214 days with their immunotherapy alone, well beyond the typical 30 to 60 days after diagnosis.

The new protocol is even more effective. Using the immunotherapy paired with the CD200 inhibitor has extended the dogs’ lives well beyond the survival of those that had received the vaccine only. Today, 25 percent of the dogs involved in the newer studies are still alive, after as many as 730 days — and counting. 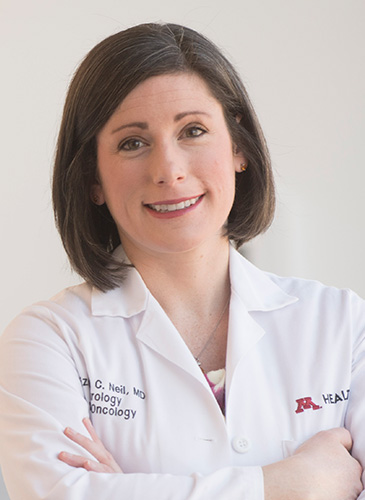 Back to the clinic

The success with canines has paved the way for evaluating the new immunotherapy —  with the CD200 inhibitor — in humans possibly this winter. The clinical trial will start with 10 to 14 adult glioblastoma patients who have experienced a first or second recurrence of their tumor, says Neil, who joined the U faculty about a year ago and will lead the study. If it is successful, the team hopes to enroll children who have brain tumors as well.

Neil is hopeful about the new protocol for several reasons. “We know that the vaccine with the CD200 inhibitor allows one’s own immune system to kill cancer cells. This immunotherapy approach allows for this natural process to happen without the cancer interfering, impeding the demise of the immune system.”

“We have a long list of people who have made significant contributions to this work and helped us move the research along,” says Moertel. “Before we were taking baby steps. This work is a big leap.”

Because these investigations are inherently expensive, Olin and Moertel started a company called OX2 Therapeutics to create an avenue for venture capital investment. They see the promise of their work in fighting brain cancer and want to help patients as quickly as possible while also expanding the anti-CD200 immunotherapy model to other cancers.

“This will be a rock star for breast cancer and melanoma as well,” Olin predicts. “If we give the inhibitor to mice modeling human breast cancer, they have an 80 percent survival rate.”

It’s part of the team’s shared vision to stop cancer in its tracks.

“We want to cure brain tumors. That’s why I do my job,” says Moertel, who has worked in pediatric oncology for nearly 30 years. “When I look at kids every single day who don’t have a cure for their disease, it’s heartbreaking. I want to find an answer.”

To support brain tumor research at the University of Minnesota, please make a gift today. 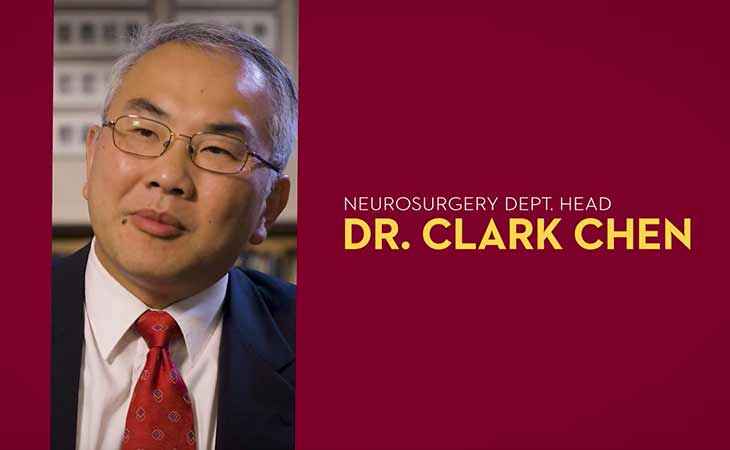 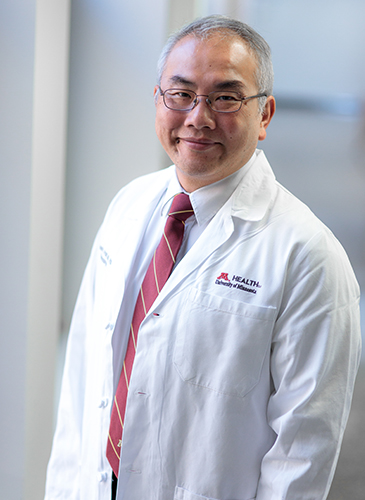 In the quest to cure the incurable — brain cancer, Parkinson’s disease, Alzheimer’s disease, and other devastating neurologic diseases — Clark C. Chen, M.D., Ph.D., believes that the key to success lies in the synergy that results from multidisciplinary collaborations. He recently took the helm of the University of Minnesota Medical School’s Neurosurgery Department, attracted by its legacy and the faculty’s passion for discovery through team-based science.

“For ideas to thrive and blossom, they need to be shared, scrutinized, and fostered among thinkers who approach these ideas from different perspectives and utilizing distinct frameworks,” says Chen, who holds the Lyle French Chair in Neurosurgery. “The University of Minnesota has a group of like-minded people who are genuinely interconnected in mission and in intellect, who are committed to translating ideas into measurable human benefits.”

A renowned brain tumor neurosurgeon and researcher, Chen came to the University from the University of California, San Diego. A native of Taiwan, he moved to California when he was 12. He earned a bachelor’s degree from Stanford University, a master’s in epidemiology from the Columbia University School of Public Health, and medical and doctoral degrees from Harvard Medical School.

Chen investigates glioblastomas and how they become resistant to radiation and chemotherapy. He was the principal investigator on multiple clinical studies involving the use of next-generation tools such as high thermal energy lasers and focused ultrasound, as well as oncolytic viruses, to destroy brain cancer cells.

“With malignant brain cancer, the treatment paradigm has been cure rarely and comfort always. Frankly, the effect of these treatments is modest at best,” Chen says. “The cure that we seek requires innovation beyond the currently available treatment options. To genuinely make a difference in the trajectory of our brain tumor patients, we will need to throw away the preconception of yesteryear and reframe the problem in ways that we had not previously conceptualized.”

Chen says he’s intrigued by a U of M research effort that combines a brain tumor immunotherapy with an agent that blocks an immune protein called CD200 (see main story). He sees this therapeutic approach as a refreshingly new way of attacking brain cancers and has already identified opportunities for synergy between this approach and his own work.

“The opportunity to do ‘good’ as a leader of the Neurosurgery Department is real,” Chen says. “It is a once-in-a-lifetime chance. I am deeply grateful for this opportunity, and I look forward to engaging and connecting with the extraordinary minds of this campus.”