The expert across the street

Such is the story of a multidisciplinary team at the University of Minnesota that is investigating the use of a “molecular band-aid” in treating damage to heart and skeletal muscle. What began as a focus on a deadly but rare disease now includes an application that could protect the health of millions of people who have suffered heart attacks.

“It’s a wonderful story of collaboration — collaboration across disciplines,” says Joseph Metzger, Ph.D., a cardiac researcher and head of the Medical School’s Department of Integrative Biology and Physiology. “I think that’s what’s most exciting.”

When Metzger came to the U in 2008, he had already been experimenting with an unusual polymer — a substance made of long, repeating molecular chains — in the treatment of Duchenne muscular dystrophy (DMD), an inheritable and fatal disease.

Caused by a recessive mutation on the X chromosome, DMD rarely affects girls. About 1 in 3,600 boys acquire the degenerative disease. Boys are typically diagnosed when they are 3 to 6 years old, when they begin to show signs of muscle weakness.

The fatal mutation prevents the production of the protein dystrophin. “This dystrophin molecule you can think of as a molecular shock absorber,” says Metzger, who holds the Maurice B. Visscher Endowed Chair in Physiology.

Without dystrophin to reinforce the cell walls of skeletal and cardiac muscles, constant contraction and relaxation cause muscle cell membranes to become leaky. Calcium from the blood can infiltrate the cells. Says Metzger, “That has devastating consequences for the functionality of the cell.”

An unusual polymer called P188 could represent a new therapeutic approach for preventing or reversing the progression of cardiomyopathy and heart failure in muscular dystrophy.

There’s no known way to get dystrophin to the muscles where it is needed. But Metzger began experimenting with a synthetic substitute — an unusual polymer called P188. Working with lab animals, he discovered that the compound seemed to seal leaky cell membranes and “could represent a new therapeutic approach for preventing or reversing the progression of cardiomyopathy and heart failure in muscular dystrophy.”

P188 is just one of an infinitely large family of compounds called block copolymers, which are chains of two different large molecules joined at the ends — think of a two-colored gummy worm. Block copolymers are used in industry for, among many other things, manufacturing shoe soles, tire treads, and computer chips.

Some poloxamers have interesting biological properties. P188, for example, has been used for nearly 50 years to thin blood before transfusions. Inside a leaky cell, the water-seeking ends and the fat-attracting belly somehow attach to or interact with different components of cell membranes, blocking the leaks.

Block copolymers such as P188 can be formulated in a nearly infinite number of combinations, sizes, and weights, each with somewhat different chemical and biological properties. One of the world’s experts in understanding this confounding array of compounds is Frank Bates, Ph.D., a Regents Professor of chemical engineering and materials science in the U’s College of Science and Engineering.

Meeting Bates was on Metzger’s agenda when he came to Minnesota. “I was very much aware that Frank Bates was, in my view, the world’s leading block copolymer chemical engineer,” says Metzger. “I’d read up on his work. He’s just a superstar.”

Metzger hoped Bates could help him understand why P188 worked as it did and perhaps point him toward similar poloxamers that might work even better. So one day Metzger walked out of his Medical School office and crossed Washington Avenue to Bates’ office.

Bates recalls the meeting. “He said, ‘I understand you know something about block copolymers,’ and I said, ‘I do,’” says Bates. “What I bring is the ability to synthesize these things and to understand them from a physical, chemical, physics, engineering point of view, including the way they interact with other materials.”

Says Metzger, “I call it the Great Trans-Washington Avenue Collaboration.”

Metzger and Bates first secured a Minnesota Futures grant, a U program designed to nurture extraordinary interdisciplinary research ideas, and then grants from the National Institutes of Health (NIH) and the Muscular Dystrophy Association to study P188’s effect on protecting not just heart muscle but also skeletal muscle. They also are trying to better understand how poloxamers like P188 grab onto and seal membranes and whether different formulations might be more effective.

“I want to know how these work,” says Metzger. “How is this protecting the muscle cells? Then perhaps we can modify the structure of this synthetic block copolymer to improve its functionality.”

The goal — years ahead — would be to develop a treatment, such as an injection, for Duchenne muscular dystrophy that would delay its worst effects for years. “It would be very much like the life-long treatment and management of diseases such as type 1 diabetes,” Metzger says. 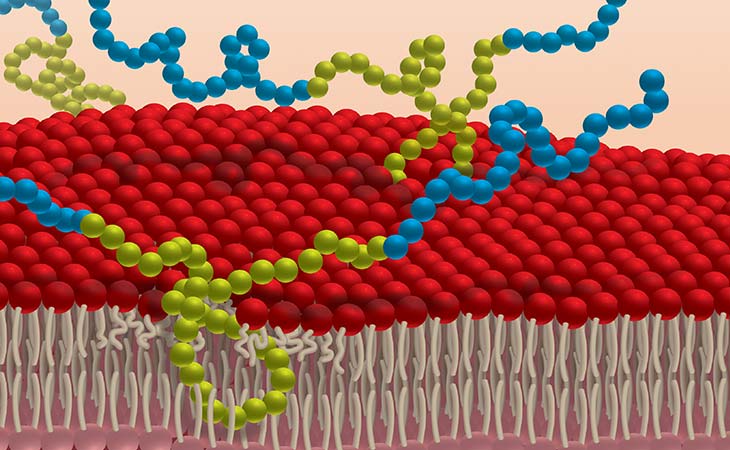 The block copolymer known as P188 attaches to a damaged cell membrane to stabilize the membrane and preserve muscle cell function. U researchers are trying to better understand how this “molecular band-aid” process works. (Illustration: Cynthia DeKay)

It’s a small University after all

About three years ago, University cardiologist Demetris Yannopoulos, M.D., was talking to a friend at the U, a postdoctoral fellow working in Bates’ lab with the P188 compound that Metzger was testing to reinforce cell walls to treat DMD.

That piqued Yannopoulos’ interest. Yannopoulos, who specializes in cardiac resuscitation, was treating heart attack patients whose heart cell walls were damaged as the flow of blood and oxygen were restored to the heart — so-called reperfusion injury.

In a heart attack, Yannopoulos explains, the heart muscle is damaged as the rupture of an atherosclerotic plaque blocks the flow of blood and oxygen. But further damage occurs when the cardiologist restores the flow of blood. The body’s own inflammatory response damages heart muscle that is already in disarray. He thought that perhaps a compound such as P188 could strengthen the cells’ walls as blood and oxygen are restored.

Now it was Yannopoulos’ turn to visit Bates’ office.

“After I talked to Frank, I realized the potential was even larger” because of the many varieties of compounds to work with, says Yannopoulos, who holds the R. K. Eddy Endowed Chair in Cardiovascular Resuscitation. “It opens up a huge area of investigation.”

With an NIH grant, Yannopoulos began investigating the benefits of this molecular band-aid on pigs. After a heart attack in a pig, he found that injecting a dose of P188 directly into the artery leading to the heart has the “drastic effect” of saving up to half the tissue that would otherwise die.

He anticipates that with further research and clinical trials, P188 or a similar molecular patch will help many of the 1.5 million people who suffer heart attacks in the United States each year.

“By having the ability to decrease the amount of muscle that dies with a simple intervention, you not only save the muscle itself but you save people’s lives, save visits to the hospital for future heart failure,” Yannopoulos says. “People can be more active. They don’t have to be debilitated. Everything stems from our ability to reverse the injury from heart attack.”

From manufacturing to medicine

By having the ability to decrease the amount of muscle that dies with a simple intervention, you not only save the muscle itself but you save people’s lives. They don’t have to be debilitated. Everything stems from our ability to reverse the injury from heart attack.

All three scientists continue publishing research on the use of the P188 molecular band-aid in animal models.

Though the compound isn’t being used in clinical trials in this country, it was recently approved for use in Europe at physicians’ discretion to treat Duchenne muscular dystrophy.

Hoping to limit damage caused by heart attacks in humans, Yannopoulos is working to replicate and verify the success he has had in pig models. He is also working with Bates to select a new compound to test with pigs.

For Bates, this is the first time he has investigated chemical engineering questions in a medical or biological setting.

“I come back to this notion that there’s this grand challenge to bridge basic sciences and medicine. Those two are very different. You know, when Demetris has somebody on the operating table and he’s got to put a stent in him, he’s not … thinking about the fundamental molecular interactions that are going on as he sends this cannula through somebody’s coronary arteries. On the other hand, what’s going on on a molecular scale is ultimately responsible for the efficacy of any of these procedures. This connection with the Medical School, if we can foster it and deepen it, I think there are huge benefits.”

This crossdisciplinary work begins, of course, when researchers take advantage of the expertise across the street.

“It’s the most important thing about being an academic faculty working in the University — building bridges between departments,” Yannopoulos says. “Because in isolation, none of us could have done any of this. This is the strength of our University of Minnesota.”

For the first time, the University’s Frank Bates, Ph.D. (far left), put his block copolymer expertise to use for a medical purpose when he started collaborating with cross-campus colleagues Joseph Metzger, Ph.D. (center), and Demetris Yannopoulos, M.D. (Photo: Mark Luinenburg)

While University of Minnesota researchers are exploring the potential of using block copolymers to repair damaged heart tissue, these molecular chains are already used to make many products, including: