Sylvie Hogan won’t remember her trip to the Smithsonian in April 2018 because she was just 3 months old. But the photo below shows her fascination with a nifty contraption that would become more significant in her life only one year later.

That interesting machine is a replica of the Lillehei-DeWall Bubble Oxygenator, and the original was invented by Richard DeWall, M.D., Medical School Class of 1952 and surgery residency Class of 1962 — the uncle of Sylvie’s grandfather. 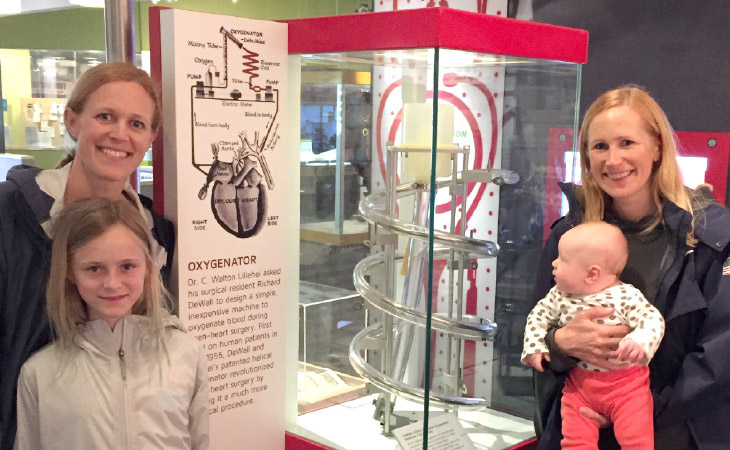 Lindsay Hogan (at right) holds Sylvie on a 2018 visit to the Smithsonian to see a replica of their relative’s invention. They are joined by Lindsay’s sister Amber Hickory and her daughter Kaya. (Photo: courtesy of Jim DeWall)

DeWall was a resident working under famed heart surgeon C. Walton Lillehei, M.D., Ph.D., when he was charged with finding a way to eliminate bubbles from oxygenated blood in the surgical heart-support machines of the time. This was literally a critical task, as gas bubbles in a patient’s blood could lead to a stroke.

Sylvie’s grandfather, Jim DeWall, remembers visiting “Uncle Dick” in his lab many times in the early 1950s while his uncle was working on this important assignment.

“We used to come down to University football games because my parents were strong backers,” recalls Jim DeWall, who grew up in Morris, Minnesota. “We’d always come down early to the Medical School because we’d have lunch with Uncle Dick. After a cafeteria lunch, Dad would say, ‘Come on, Dick, let’s go to the game.’ Dick would say, ‘Sorry, Bob, I’m working.’” 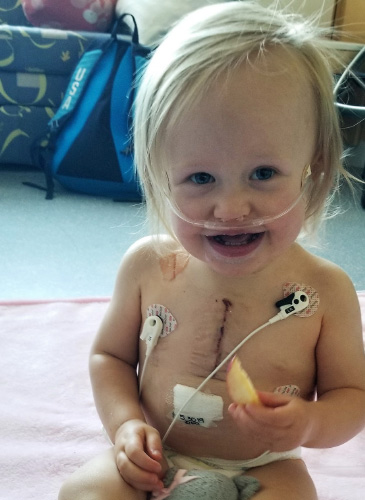 Sylvie Hogan had more energy than ever after her surgery. (Photo: Courtesy of Lindsay Hogan)

Doctors first used Richard DeWall’s machine on a human patient in 1955 — and it was a dramatic technological breakthrough. The efficient instrument was also inexpensive — just $15. It would become the basis for future generations of heart-lung machines, including those used in cardiopulmonary bypass surgery today.

Which brings us back to curious Sylvie, who was 1 year old when her pediatrician detected a heart murmur at a well-check. Upon further investigation, doctors found a leaking heart. A defect called an aorto-left ventricular tunnel, or an LV aortic tunnel, was responsible for it.

“It’s extremely rare,” says her mom, Lindsay Hogan, “something like one in a million.”

On May 28, 2019, Sylvie’s care team hooked her up to a modern heart-lung machine and closed the hole in an hour-long open-heart surgery made possible by her great-granduncle’s invention. Days later, 16-month-old Sylvie was toddling around with more energy than ever.

As much as little Sylvie makes Jim DeWall smile, so too does his pride in his uncle’s invention. For a family with many connections to the U of M — Jim’s father, Robert DeWall, helped to establish the University of Minnesota Morris in the 1960s, and Jim himself graduated from the U’s Twin Cities campus in 1968 — the legacy represented in the photo makes him beam with delight.

“It’s such an ironic, fun picture, to see the three of them looking at the camera, and there’s little Sylvie staring at the machine,” Jim DeWall says. “Just the fact that she’s looking at it, and one year later, modifications of that machine allowed for her surgery, as it has for millions of other people in the world. What a happy story.”

Lead photo: Richard DeWall, M.D., with his Lillehei-DeWall Bubble Oxygenator in 1956. Urban legend has it that the plastic tubing used in DeWall’s prototype came from iconic U of M campus restaurant and pub Stub and Herb’s. (Photo: University Archives)