Hackathon puts the ‘flash’ in flashcards 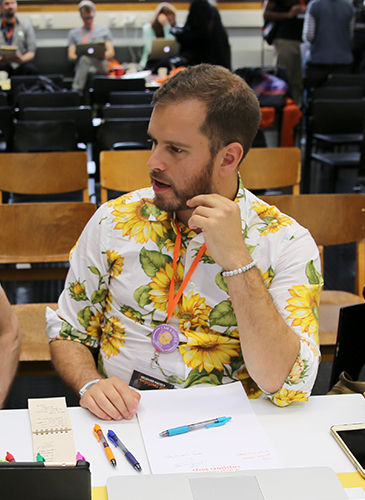 Third-year medical student Nathan Ratner estimates that he has made more than 15,000 flashcards over the course of his 17 years in the education system. And this is not unusual.

A problem-solver, Ratner had the chance to curb flashcard overload this summer as one of 16 medical students from around the globe chosen to participate in the Elsevier Hacks Hackathon in Helsinki, Finland.

At the hackathon, Elsevier — an information analytics business specializing in science and health — gave students 48 hours to design and build an application that improves some aspect of medical education. After mingling and sharing ideas, Ratner formed a team with another medical student from India, user experience designers from the Philippines and Finland, and developers from Poland and Hungary.

Together, the teammates came up with an online application that simplifies and automates the cumbersome process of building flashcards and other study devices.

“Every medical student’s dream is to leave a lecture with study materials already assembled,” says Ratner. “With our app, students can go straight into studying without having to construct — they can get their tools together while sitting in class.”

Among the other hackathon projects developed were applications that taught anatomy interactively or enabled medical students to apply theoretical knowledge to real-world scenarios. Ratner’s team took third place, receiving a $1,500 prize to invest in launching their new app.

The real reward, says Ratner, was the network of international friendships he forged at the Hackathon — and the prospect of making a difference. “Innovation comes from bringing together groups of people from different backgrounds and perspectives. Through events like the hackathon, medical students are creating networks that lead to a better world.”