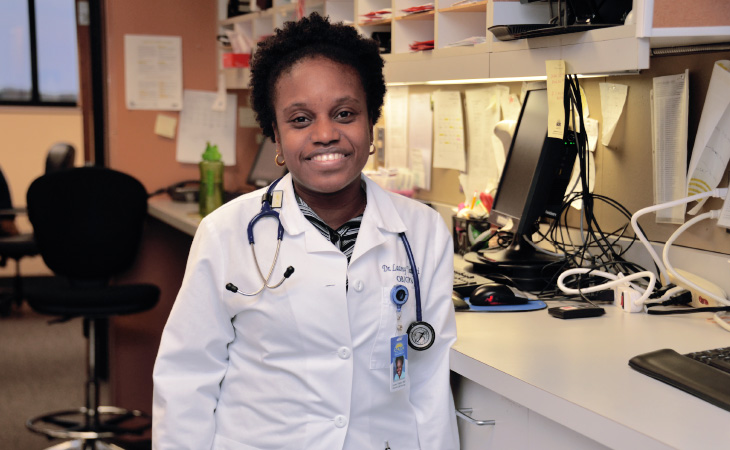 Halfway ’round the world and back again

It’s a frigid winter morning and Laamy Tiadjeri, M.D., is in the midst of her Saturday hospital rounds. The ob-gyn hasn’t delivered any newborns yet today, but it’s early. And Rice Memorial Hospital in Willmar, Minnesota, is a busy place — more than 800 babies enter the world here each year.

Tiadjeri, a 2010 U of M Medical School graduate, could hardly be farther from home. She grew up 6,000 miles away in Lomé, the bustling capital of Togo and an important West African port on the Gulf of Guinea. Like nearly every day there, today it’s sunny and hot —  almost 90 degrees.

“After residency in Michigan, I tried to find a warmer place to practice,” says Tiadjeri, laughing, but the warmth of Willmar’s residents drew her back. “They’re really nice people. The patients are great and really grateful to have you.”

This increasingly diverse city of 19,000 residents — more than 20 languages are spoken here — first welcomed Tiadjeri in 2008, when she participated in the U of M’s Rural Physician Associate Program (RPAP) as a third-year medical student. While she had two-week rounds here in urology and orthopaedics, it was her six weeks in ob-gyn that helped her decide to pursue the specialty.

“I felt that selecting ob-gyn would be helpful if I wanted to go back home occasionally and work with my surgical skills, specifically in women’s health,” she says. 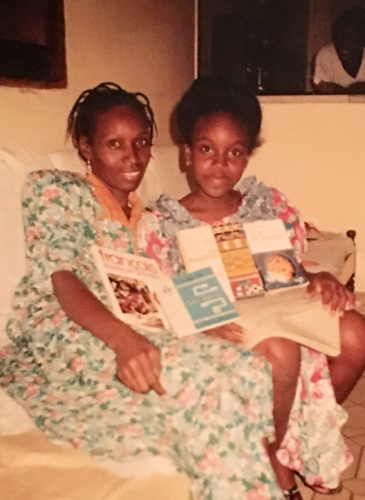 Laamy Tiadjeri says her mother (left), a lawyer, made many sacrifices so Laamy and her sister could get a quality education. (Photo: Courtesy of Laamy Tiadjeri, M.D.)

Inspired by physicians she knew as a child, especially her own pediatrician, Tiadjeri recognized from an early age that she wanted to become a doctor. After graduating from college in Oklahoma, she was attracted to the University of Minnesota Medical School for two major reasons: it allowed students to study an extra year in international locations, and it offered RPAP.

RPAP — a nine-month, community-based program — offers a wide range of opportunities, she says. At a rural hospital, students learn directly from veteran physicians and get hands-on patient experience in many specialties.

Following her RPAP training, Tiadjeri returned to Togo, where she participated in two rotations offered by the U’s Global Medical Education and Research program. She spent four months at a private hospital and three months at a public hospital, focusing on ob-gyn at the latter. “In the capital, if a woman has the means and can go to a private clinic, then she probably has better care,” Tiadjeri says. “But women in rural areas don’t have the same level of care, and a lot of health education is needed.”

That’s in part why she went back to Togo again for a year following her residency, reconnecting with family members and working at three hospitals — two rural and one urban —  before she decided to return to Willmar.

Today Tiadjeri works at Willmar’s Affiliated Community Medical Center with two of the physicians who mentored her as a student; three others have since retired. “They were really great at teaching and letting me do deliveries with them,” she says. “They had a big impact on me, and I’m glad to be back working with them.”

The feeling is mutual. Colleague and mentor Stan Antkowiak, D.O., describes Tiadjeri as “spectacular,” noting that the RPAP program has done exactly what it intended — getting excellent physicians like Tiadjeri to serve rural communities.

Now Tiadjeri is continuing the cycle by mentoring RPAP students of her own. “I learned preparation from her,” says Brooklyn Leitch, a third-year U of M medical student, RPAP participant, and Willmar native. “I really appreciate observing Dr. Tiadjeri. She comes in early, and she’s prepared for every patient. When she’s off the clock, she’s still thinking about her patients.”

When Tiadjeri does have down time, you might find her traveling, a favorite pastime, or, more likely, at home — reading, watching movies, or cooking for friends. “I’m kind of a homebody,” she says, adding that’s especially true in the winter. Indeed, her family still wonders about her decision to live in this climate. “Sometimes I do, too,” she says, smiling.