Hanging up his lab coat

After 50 years, Jack Delaney, M.D., Ph.D., packed up his lab in June to retire from research. 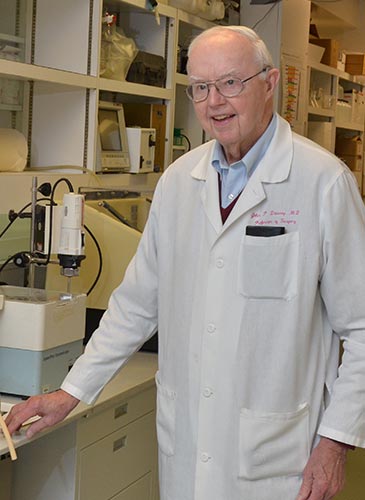 Jack Delaney, M.D., Ph.D., retired from clinical work 14 years ago but just closed his lab in June. “I enjoyed the process of conducting and teaching research,” he says, “so I hung on longer than most people do.” (Photo: Jerry Vincent)

During his six decades at the University of Minnesota, starting in medical school in 1951, Delaney saw many evolutions of the school and in the field of medicine. He watched the transformation of the U’s medical enterprise into today’s Academic Health Center. He saw the start of one of the most significant changes in American medicine, Medicare.

Wangensteen insisted that all residents spend considerable time — usually several years — in the laboratories, both surgical and basic science. As a result, Delaney says, the U had probably the most productive resident research program in the nation in the 1950s and into the ’80s. Delaney says the experiences he had in physiology and surgery labs as a resident engendered a lifelong love for investigation. He encourages all residents to learn scientific methods.

“Lab experience helps all residents, regardless what their career is going to be,” he says. “The clinical surgeon thinks more critically having studied the background, the statistics, the believability of medical papers. Writing papers is particularly instructive.”

Although he’s not in the lab anymore, Delaney continues to write papers and can still be found at surgical Grand Rounds every Tuesday.