Twin Cities family medicine resident Jenny Zhang, M.D., had never considered herself a writer. She certainly wouldn’t have envisioned herself sharing her deeply personal writing with a packed roomful of people. But last fall, Zhang, a recent University of Minnesota Medical School alumna, brought hundreds of her colleagues and faculty to tears with her wrenching story of caring for a cherished patient through pregnancy to its tragic, traumatic end.

Helping her patient deliver a stillborn baby rattled Zhang to her core, and she still struggles with grief and self-doubt in the wake of it. “The emotions of shame and guilt and imposter syndrome — I took a huge hit in my self-confidence,” she says.

The kindness and reassurance offered by peers and friends helped, but Zhang continues to process the experience. When a colleague suggested that Zhang write about it and submit her story to organizers of the 2019 Metro-wide Resident and Fellow Story Slam, she swallowed her apprehension and gave it a shot.

“Even months later, I continue to relive this scene over and over. It invades my mind when I’m least expecting it. … My rational mind tells me it’s not my fault, but I think my heart will always feel that it is.”

Writing, rewriting, and sharing her story wasn’t easy. But as Zhang hoped, it has fostered her healing. Her story, that of a truly compassionate physician whose humanity compounds the challenges of her job, resonated with every listener in the room, and their shared emotion helped ease Zhang’s pain.

“Confidence has been a struggle for me throughout my residency, and I’ve worked hard to build it up … It provides me with some comfort that she trusts me enough to continue seeing me, but I’ll have to learn to trust myself again, too.”

The November story slam, sponsored by the Metro Minnesota Council on Graduate Medical Education, was the second annual event of its kind — and by all accounts, even more successful than the first. The inaugural story slam, held at Minneapolis’ Surly Brewing in 2018, attracted 17 storytellers and 185 listeners; the 2019 event, at BlackStack Brewing, included 15 storytellers and about 350 audience members. Attendees came from numerous specialties and institutions. Organizers hope the event, aimed at helping promote well-being among residents and fellows, will become a fixture in graduate medical education. A date for the 2020 story slam is forthcoming. 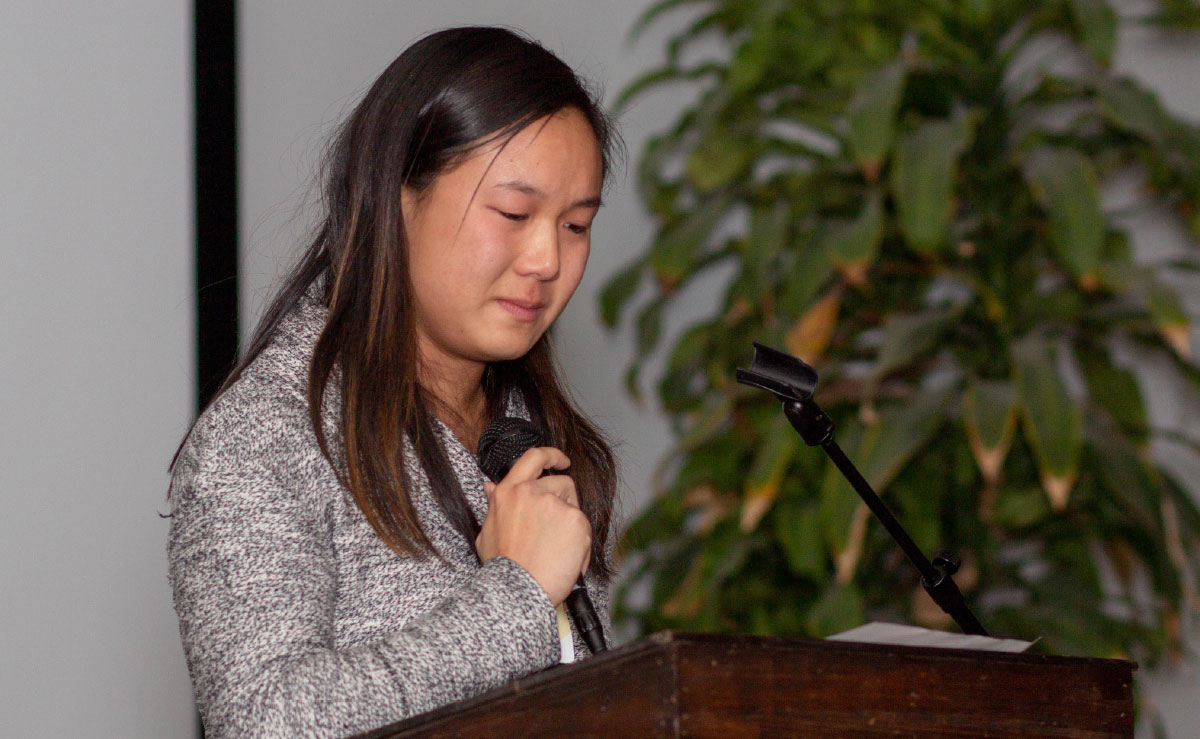 The Medical School’s Maren Olson, M.D., M.P.H., and Ben Trappey, M.D., are working on measuring the event’s impact, on both storytellers and audience members.

“Burnout is a huge problem in medicine, and residents are no exception to that,” says Olson, an associate program director for the Medical School’s Pediatric Residency Program, associate director of medical education at Children’s Minnesota, and the event committee’s chair. “We know there is some good research showing that if people have a sense of connection and community, that is protective against burnout. We also know that when people feel their work is meaningful, that is protective against burnout as well.

“Data speaks loudly in medicine, and we’ve been gathering some to understand the impact of this [event],” explains Olson, a 2003 Medical School graduate. After collecting uniformly positive but rather general reactions following the first year’s event, she and Trappey, an assistant professor in internal medicine and pediatrics, sought more in-depth feedback from audience members and storytellers after this year’s slam.

Organizers distributed a questionnaire, completed by 129 attendees. They also completed in-depth follow-ups with 30 of those individuals. All were audience members, and a few were storytellers as well.

“I’ve been really pleased to see that both audience members and storyteller-audience members talk about a sense of connection and community,” Olson says. One survey question asked whether attendees would recommend the event to colleagues. The average response was 4.8 out of 5.

“I feel connected to my fellow residents, more than I have in a long time,” wrote one participant. “I got to hear from people as humans, not doctors, for a second, and it was awesome.”

When asked whether the story slam helped remind them of a sense of purpose and meaning, audience members responded emphatically.

Another wrote, “Made me laugh and cry, renewed my faith in medicine, gave me the will to continue on.”

And from a faculty audience member: “This event restores my soul after a very tough week on service at the hospital. Thank you to all the learners whom I am supposed to be teaching, for teaching me to return to myself.” 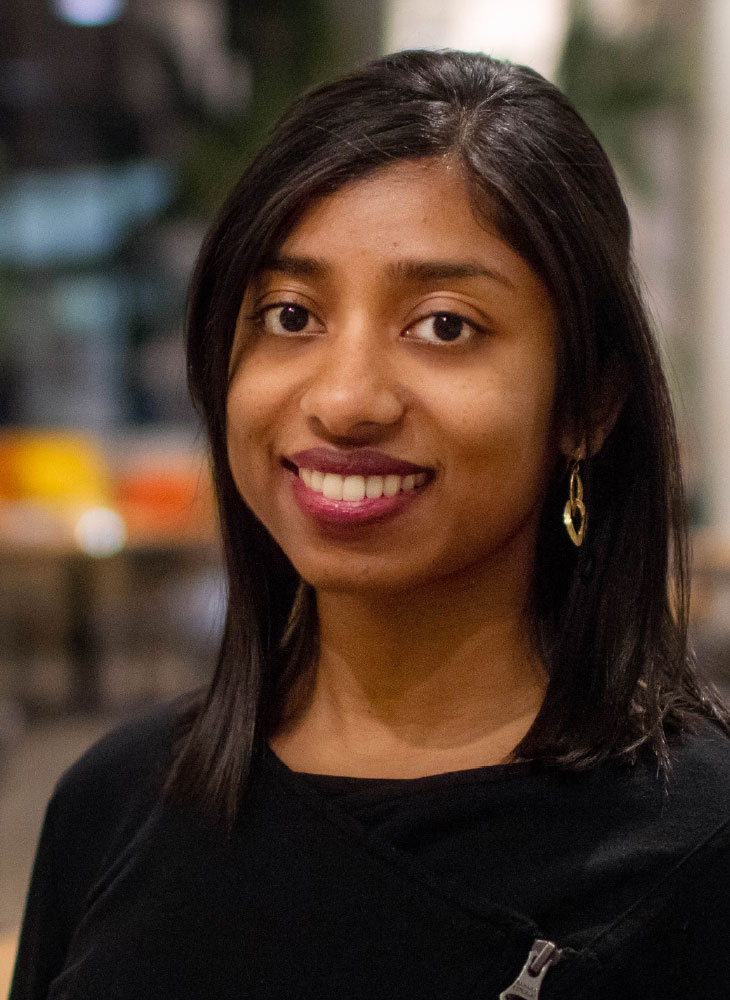 Every aspect of the story slam — the food and beer, the social time built in at the beginning, the small-group table seating, the absence of reporters or video cameras — was intended to foster conviviality, safety, and intimacy. Still, Trappey says, organizers don’t take its resonance for granted. “I think we’re both somewhat astounded by its success so quickly,” he says.

Organizers and storytellers took pains to protect the privacy of patients in the stories. “We were fortunate that all of our storytellers were mindful of that; these were very much their stories,” Trappey says. “I think in the physician writing genre, in general, the pieces that are the most affecting and least [exploitative] are the ones where it’s the provider’s journey that’s being driven by patient encounters.”

Trappey — who, like Olson, has long enjoyed writing — knows firsthand the power of storytelling to help the teller grapple with difficult experiences and appreciate meaningful ones. Since he was a resident seven years ago, he has co-led a physician writing group in Minneapolis.

“There are a number of benefits of reflective writing; there’s a pretty robust set of data showing that it has immunologic and overall health benefits,” he says. Personally, he knows that writing about a traumatic event — particularly, writing and revising multiple times — helps the storyteller make sense of what happened.

“For people who are inclined to be storytellers, giving them an outlet to do so and to become better writers is what I’m most interested in — and sharing ways to make it less intimidating,” he continues.

Pediatric hospital medicine fellow Anisha Rimal, M.D., participates in the Minneapolis writing group and was among the storytellers at the 2019 story slam. “It really impressed on me what an amazing community we have,” Rimal says. “Such a rich, diverse array of perspectives. I don’t think everyone [who shared a story] would consider themselves a writer, but we all have things to share as part of this unique, weird world.” 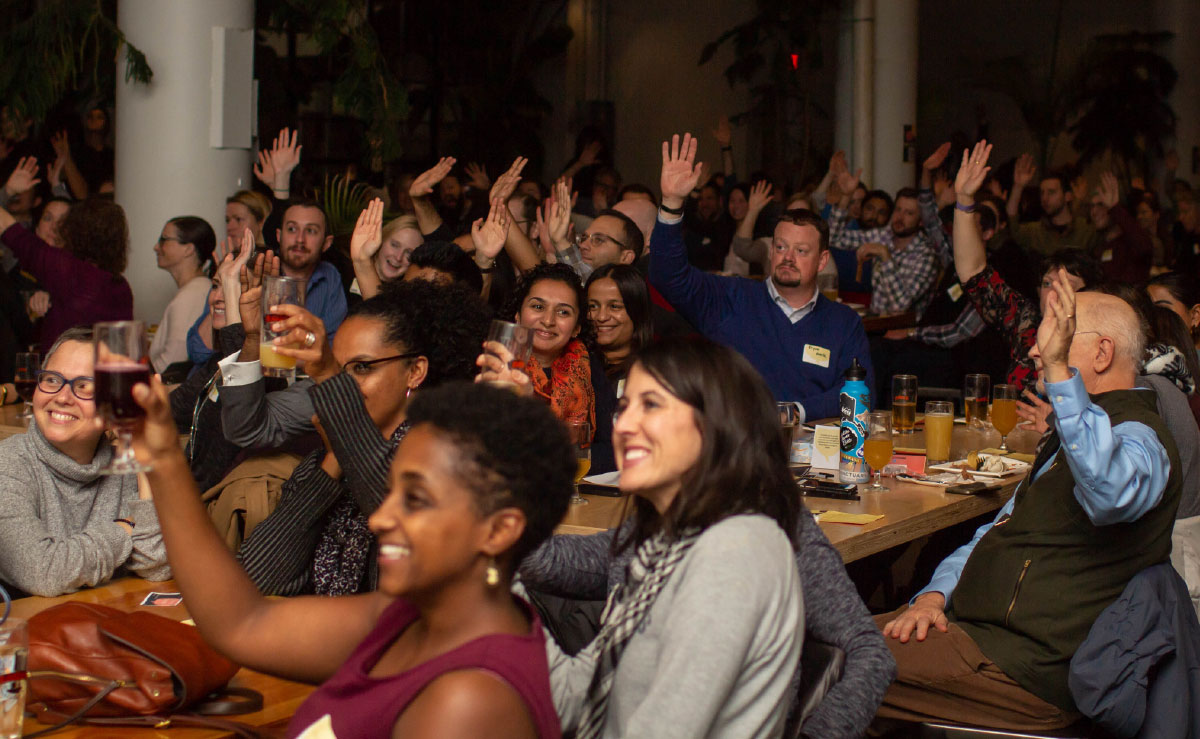 ‘Out of my comfort zone’

As a newcomer to storytelling, Zhang concurs: From start to finish, her story slam participation was tough but profoundly worthwhile, much like medicine itself.

“Writing it was hard, because you’re reliving it as you’re writing it,” Zhang says. “But it was also really therapeutic in a lot of ways because it helped me process it and think about how it was affecting me.

“It’s hard to bring yourself to do that because with really sad experiences, your instinct is to push it away,” Zhang continues. “I was definitely out of my comfort zone. But it’s so important, for yourself and [for others], not to do that.”

Sharing her writing with 300-some peers may have been even tougher, but worthwhile, she believes — both for the support she received and for the chance to remind other physicians that they’re not alone.

The fact that more-established physicians encounter many of the same stressors and occasional crises of confidence that affect residents and fellows — and the response from faculty who attended the November event —  suggests there’s a hunger for such gatherings across the provider community.

As one faculty physician wrote after this year’s story slam, “Sharing tempers the sorrow and expands the joy.” 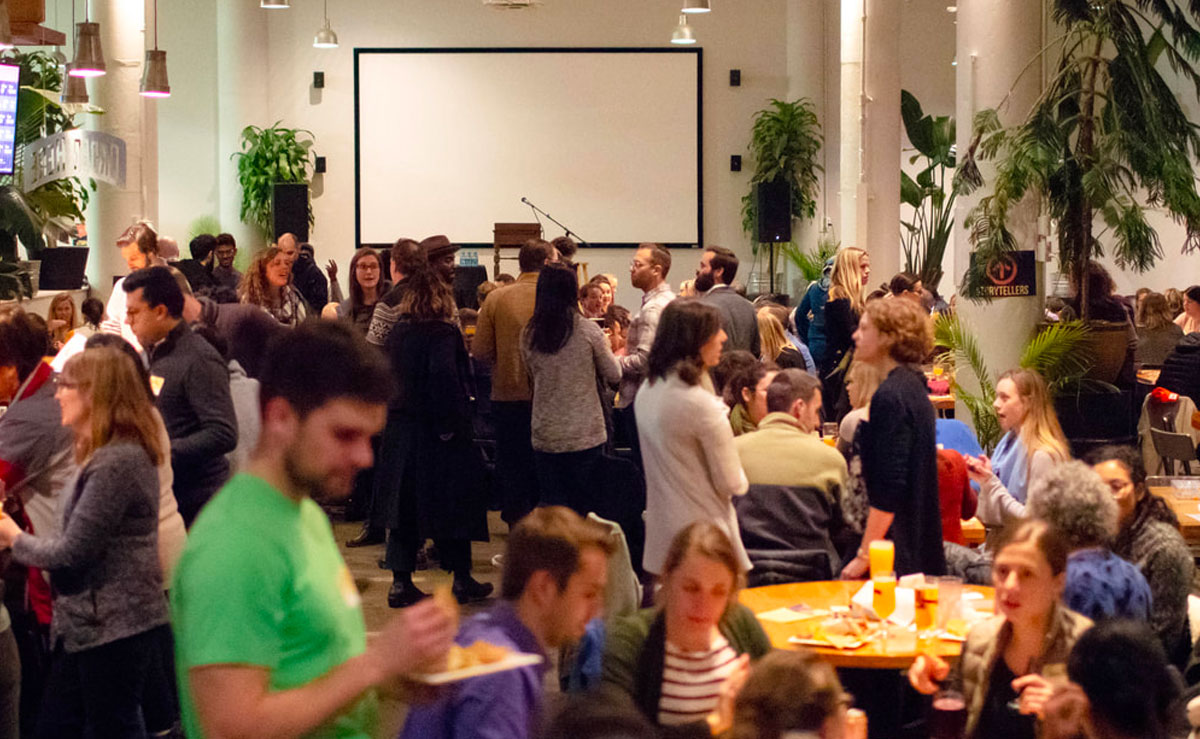 Rules of a story slam

Typically, a story slam is a storytelling contest. Participants get five minutes each to tell their stories, which are often organized around a common theme. Many such events are open mic, and disallow notes.

Because the Metro-wide Resident and Fellow Story Slam was more about sharing and camaraderie than competition, it wasn’t a contest, wasn’t timed, had a preset list of storytellers, and permitted the use of notes.