Heart in a box

It’s the ever-present challenge of heart transplantation — too few donor hearts and too many people who need them.

Last year, 3,191 suitable hearts were transplanted in the United States. But more than 100,000 patients could benefit from a new heart, according to University of Minnesota Health cardiologist Cindy Martin, M.D.

The result of this mismatch: highly selective waiting lists, and many people who never get the new heart they need. Thousands of people on waiting lists die each year. Says Martin, “There are always more people waiting than there are donors.”

But a new clinical trial at the University of Minnesota and seven other heart transplant centers across the country may help make use of good hearts that don’t meet today’s stringent guidelines for transplantation. The potential result: more hearts for more patients.

If successful, the clinical trial involving a portable device known as the TransMedics Organ Care System (OCS) — or more colloquially, the “heart in a box” — could have a “huge impact on the donor organ allocation system,” says Kenneth Liao, M.D., Ph.D., surgical director of the University’s heart transplant program and principal investigator in the University’s portion of the trial.

Hearts for transplant have been carried from a brain-dead organ donor to a waiting recipient in essentially the same way for nearly half a century. The heart is placed in a plastic bag of cold saline rich in nutrients and packed in a plastic cooler filled with ice.

Time is of the essence because the icy conditions soon begin to damage the heart. Time out of body — what is called “ischemic time” — is best kept to under four hours. “Between four and six hours is acceptable in the right situation,” says Martin, who is a member of the transplant team working with Liao. “We try to avoid greater than six hours if we can.”

That’s a narrow window in which to achieve organ removal, and account for traffic, air transport, and operating time at the recipient’s end. “That ischemic time does limit the availability of organs,” says Martin.

The OCS is designed to open that window a bit wider. TransMedics bills it as “the world’s first commercial, portable, warm blood perfusion system.” The device stands waist-high and rolls around on a cart. Inside the device, the heart continues to beat and circulate the donor’s warm, oxygenated, nutrient-laden blood until the heart is disconnected and implanted into the recipient. If the heart should begin to beat abnormally, the machine’s settings can be adjusted to change the blood flow.

The goal is to increase the time the heart can safely be kept outside the body, even if only by a few hours. That in itself would allow some donor hearts to be used that otherwise would be ruled out because transport time was too long. In fact, an initial clinical trial conducted from 2010 through 2013 showed that the OCS is every bit as effective at protecting the heart as the conventional method of icing the organ. That finding opened the door to the latest trials.

(The University has been involved in a separate clinical trial with a similar OCS designed for lungs. Surgeons here have successfully performed several dozen lung transplants using the device.)

While extending ischemic time is key, other features of the system may be just as important.

When a heart is packed on ice the conventional way, a surgeon has no way to test its condition before transplanting it into the recipient.

“Whether the heart is good or bad, we’ll put it in, regardless. There’s no option. We do not know,” Liao says. “But now [with the OCS] it is different. We’ll bring the heart back. We’ll watch the heart work, pumping, until we’re totally satisfied that this heart is usable, that it is a good heart. And then we’ll take the recipient’s heart out and put this heart in. So we have more time to watch this heart to make sure that it is indeed working before we put it in.”

Otherwise, the operation is the same, for the patient and surgeon. 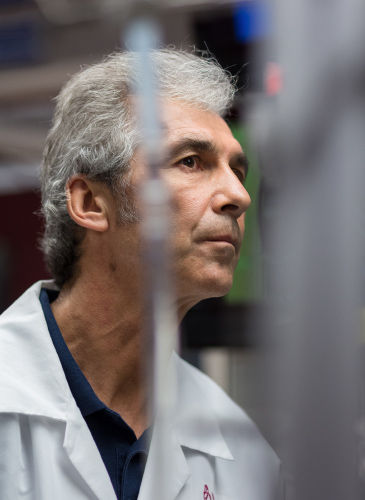 Paul Iaizzo, Ph.D., plans to use a research-dedicated TransMedics device to find ways to extend the time a donor heart can safely be kept outside the body. (Photo: Brady Willette)

The current clinical trial of the OCS is known as EXPAND Heart; it expands the criteria for what is an acceptable donor heart in a long-term effort to expand the number of organs available. In fact, TransMedics officials say the device has the potential to double the number of heart transplants in the United States.

The traditional criteria for an acceptable heart includes a donor who is younger than 55 years old with no history of chest trauma or cardiac disease, no history of low blood pressure or low oxygen in the blood, and a normal electrocardiogram and echocardiogram. The heart must pump with sufficient force. Another factor is the time it will take to transport — the ischemic time.

But in the clinical trial, the University is looking for “marginal donors” whose hearts might be rejected under the traditional criteria. Says Martin, “Often it’s not one big thing that rules out a heart, but a lot of little things that make it a poor candidate, that start adding up to tip the scale.”

The OCS gives a surgeon such as Liao an opportunity to continuously monitor the heart during transport and to continue to examine its function, even at an enzymatic and cellular level. That gives surgeons more confidence in using a heart that might have come from an older-than-optimal donor or a heart that has been in transit for more than four hours.

“This gives us time to assess the heart until about 10 minutes before we put it into the recipient,” says Liao. “That helps a lot.”

The alternative, of course, might be no heart at all for that patient.

So far in the U’s portion of the clinical trial, four donor hearts have met the criteria as “marginal” and were removed and transported to the U in the OCS. Two were deemed unsuitable for transplantation upon arrival at the University of Minnesota Medical Center, but the other two were judged satisfactory and were transplanted into patients. One patient survived and went home. The other patient experienced an episode of rejection, which was successfully treated, but the patient later died of non-heart-related complications. Liao sees no indication that the OCS played a role in the rejection.

The transplant team is evaluating additional donors for the study. Liao says his team hopes to obtain 10 donated hearts and be able to transplant at least half of them. He anticipates concluding the study late this year or in early 2018. U.S. Food and Drug Administration approval of the device will hinge on the results of the EXPAND Heart study. (The OCS for hearts is already approved for commercial use in Europe.)

Liao says that if surgeons could use 50 percent of these so-called marginal hearts that they would otherwise reject, “that’s very significant, if you look across the nation, if this were to become the practice.”

Meanwhile, the University’s Visible Heart Lab hopes to buy an OCS to experiment with donated hearts that don’t pass muster for transplantation.

Paul Iaizzo, Ph.D., director of the renowned lab and Medtronic Professor of Visible Heart Research, and colleagues want to better understand cellular and tissue changes that affect the heart during long periods on the device. They aim to discover whether various medical treatments before removing the heart and during transport can extend the time the heart can safely be kept outside the body.

“We really have expertise in trying to do pre- and postconditioning of hearts to make them more viable for transplant,” Iaizzo says.

Admittedly, expanding the list of donors and increasing the viability of the heart during transportation won’t eliminate the vast imbalance between the number of hearts available and the number of people who need them.

But a device like the OCS, if these clinical trials prove successful, might help to chip away at the disparity. Says Liao, “A lot of patients can benefit from that.” 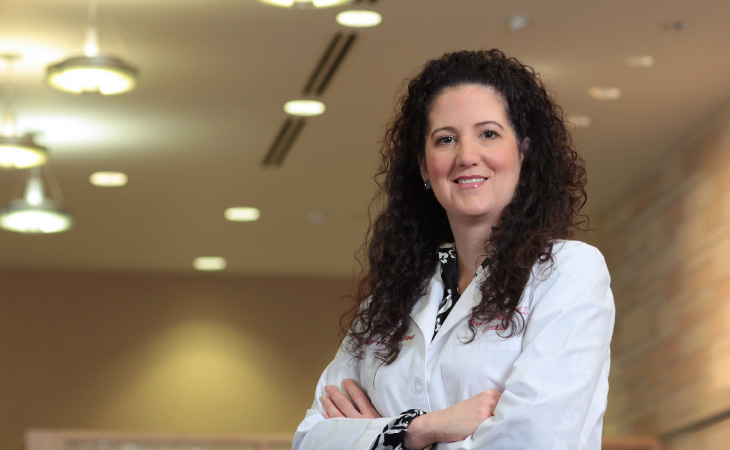 Cardiologist Cindy Martin, M.D., says the number of heart transplants performed in a year largely comes down to luck in matching donor hearts to recipients. (Photo: Courtesy of University of Minnesota Health)

So is the University setting a trend for a dramatic increase in heart transplants?

Probably not, says Cindy Martin, M.D., an associate professor of cardiology at the U and medical director of the M Health Heart Failure Program.

The number of transplants performed at a big center like the University of Minnesota Medical Center is limited chiefly by the number of donor hearts that become available according to well-established selection criteria set by the International Society for Heart-Lung Transplantation, including blood type, size, physical condition of the donor, and other physiological factors. Says Martin, “The pair has to match, and you never know when that’s going to happen.”

Donor hearts are also allocated by geography, with preference given to medical centers located nearer the donor. As a result, patients on a waiting list at the University are often vying with patients at Mayo Clinic, Abbott Northwestern, and Hennepin County Medical Center.

So some of the success in finding a suitable donor heart is just the luck of the draw — how well do the University’s patients match up with the hearts that become available, and how many patients are waiting at other big heart centers in the area? Martin suspects, in some ways, the University simply got lucky this year, with a fortuitous alignment of donors and recipients.

But other factors suggest the University may be doing some things to boost transplant numbers — if only modestly, she says.

For one, the University has a growing list of potential heart recipients simply because it has been a major heart center for so long. University surgeons have placed many left ventricular assist devices (heart pumps), which are beginning to wear out. As complications develop, more patients move to the transplant waiting list.

Second, the clinical trial of the Organ Care System accounted for two transplants that otherwise would not have occurred.

Finally, the heart transplant team has “been trying to be aggressive about really making sure that we’re looking carefully at donors,” says Martin. “Some of that is just really digging in for information.”

Donor information sometimes suggests at first blush that the heart is unsuitable. But further investigation can reveal that it may be OK. The fatal trauma — such as drug overdose, suicide, motor vehicle accident — may have left the heart stunned but otherwise healthy.

“If you have a 19-year-old heart and someone tells me its function is slightly abnormal but it was only a couple of hours after the event, I think, well, let’s look at that again in 12 hours, because that heart shouldn’t have anything structurally wrong with it,” Martin says. “The last thing you want to do is let a good heart not be used because of incomplete information.”