Fifty years ago, two renowned heart surgeons who learned their skills at the University of Minnesota Medical School vied — whether they acknowledged the competition or not — to complete the first successful human heart transplant.

Christiaan Barnard, M.D., Ph.D., a South African surgeon working at Groote Schuur Hospital in Cape Town, on December 3, 1967, implanted the heart of a 25-year-old woman, killed crossing a street, into the chest of grocer Louis Washkansky, who was in his mid-50s.

Success was a breakthrough — but relative: Washkansky died from pneumonia 18 days after his operation. Kasperak died after only 14 from, in Shumway’s words, “a fantastic galaxy of complications.” Nonetheless, even that short-term success demonstrated the promise of a procedure that is now tried and true, though still risky.

A new field of surgery

Both Barnard and Shumway had been surgical residents at the University of Minnesota in the decade before the transplants. They studied and worked under Owen Wangensteen, M.D., Ph.D., the renowned chairman of the Department of Surgery, and C. Walton Lillehei, M.D., Ph.D., often called the father of open-heart surgery.

Wangensteen and Lillehei “started an entire field of surgery,” says Rosemary Kelly, M.D., who is now chief of the Division of Cardiothoracic Surgery at the University. “Because of their influence and teaching, surgeons from around the world came to Minnesota. We were it!”

By some accounts, the relationship between Barnard and Shumway was fraught, a dynamic that set up a story of competition to successfully transplant a heart. But one of Shumway’s daughters, Sara Shumway, M.D., now vice chair of cardiothoracic surgery at the University, says she doesn’t believe that to be true.

The South African’s groundbreaking surgery excited her father because it helped surmount legal barriers over the definition of death that blocked surgeons at Stanford from recovering donor hearts. “Once Barnard was able to do a heart transplant, it paved the way for other transplants to occur,” she says. 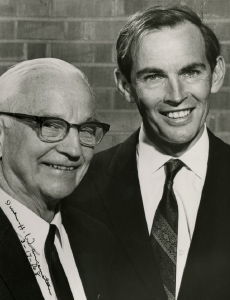 Clearly, the time was ripe. During the rest of 1968, 107 heart transplants were performed in 24 countries. But it was still a long time before patients began to live longer than a few weeks or months.

The most important advance in improving the procedure, experts agree, was the development of better drugs to suppress the immune system and prevent the body from rejecting the transplanted heart. The University’s transplant program came into its own in the late 1970s, with the advent of the immunosuppressant cyclosporine. (This year marks the 40th anniversary of the University’s first heart transplant, performed by William Lindsay, M.D., and Demetre Nicoloff, M.D.) Says Kelly, “Cyclosporine changed cardiac transplantation.”

Also important were heart biopsies to monitor for signs of rejection and determine whether stronger immunosuppression therapy was required, as well as the invention of the left ventricular assist device (LVAD), a mechanical, implantable pump that boosts the power of the heart. An LVAD can improve the health of a patient awaiting a transplant. 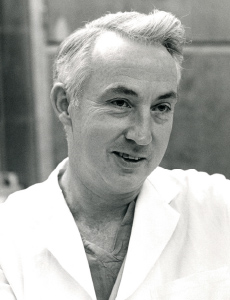 By the time Barnard died in 2001 and Shumway in 2006, heart transplants had become much more common and successful. Today, about 3,000 such operations are performed in the United States each year. Average survival is 13.6 years for patients at the U of M, about three years longer than the national average. The University has performed more than 900 heart transplants, putting it among the leading transplant centers in the country.

One reason for the U’s prominence, Kelly says, is that senior cardiac transplant surgeons Kenneth Liao, M.D., Ph.D., Ranjit John, M.D., and Sara Shumway work extremely well together. “I would put them against any cardiac surgery group in the country.

“Also critical to the success is the high caliber of heart failure and transplant cardiologists,” she adds. “We have a heart failure team at the University that truly is second to none. You need an entire community dedicated to the care of these very complex patients. We have had a dedicated and talented team from the very beginning, 40 years ago.”

Says Liao: “We all feel very passionate about caring for this group of patients. I think that’s the success of this program.”

New developments may make treatment for heart failure even more effective. The University and other centers are testing the TransMedics Organ Care System — also known as the “heart-in-a-box” — a mobile transport cart that keeps a donor heart warm, oxygenated, and beating. It is designed to keep the heart in better condition during transport, and it provides a way to monitor the heart before implantation.

Other discoveries may delay the need for transplants or make them unnecessary. More durable LVADs would push back the need for a transplant in younger patients or serve as a transplant substitute in older patients, says Shumway. Researchers are also looking to stem cells to help heal damaged hearts.

“It’s great if you can offer someone something that is not a heart transplant,” Shumway says. That’s because, although heart transplantation is well-established, long-term immunosuppression can be tough on patients.

Yet when a heart is failing, a transplant is often still the treatment of choice.

“I think it will be around for another 50 years,” Shumway says. 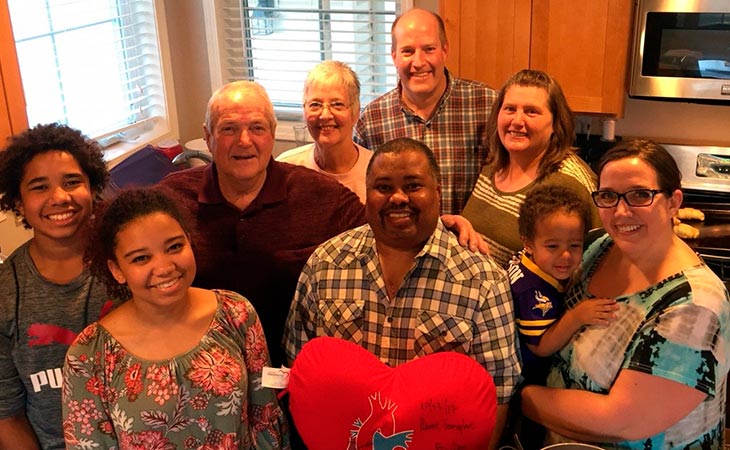 In 2017, Emson Juma became the 900th person to receive a heart transplant through University of Minnesota Health. This year, we’re celebrating the 40th anniversary of our first heart transplant—conducted in 1978.

Read about Emson Juma, the recipient of the 900th heart transplant at the University.