One of Nicholas Cook-Rostie’s revelations from his two weeks in Thailand last winter came courtesy of a rural village elder, a traditional healer who explained that he diagnoses diabetes by watching how long a person’s wounds take to heal.

“They don’t have access to the technology and textbooks that we do, and the nearest hospital is miles away,” says Cook-Rostie of the Thai healers he encountered. “But they have keen observation, and they’re so connected with their environment.

“They go out, they find medicinal plants, different herbal remedies, to treat common ailments. The community depends on each other to stay healthy,” adds the first-year U of M medical student.

The trip was part of a Learning Abroad Center course called Global Health in Thailand: Humans, Elephants, and Disease. Roughly 25 students from a wide range of disciplines spent time in and near Chiang Mai probing the interconnectedness of human, animal, and environmental health — an approach known as One Health.

The course includes a visit to Woody’s Elephant Camp, a sanctuary outside the city. The transmission of tuberculosis from elephants to humans and vice versa offers a vivid example of the One Health concept, says course coleader Karin Hamilton, D.V.M., M.P.H., an assistant professor in the U’s College of Veterinary Medicine. Students also examine how disruptions in environmental conditions can foster disease in both humans and animals.

Students participated in small-group “scavenger hunts” during which they observed social determinants of health in Chiang Mai. They found conditions that promote better health and those that compromise it, Hamilton explains.

After the trip, the group met for seven more weeks to debrief. The multidisciplinary mix of students led to rich discussion, Cook-Rostie says.

“It was awesome to be with students studying law, business, all these other fields, and see what they notice — how their experience of health and health care is different from mine, because they are my future patients.”

A circuitous path to medical school 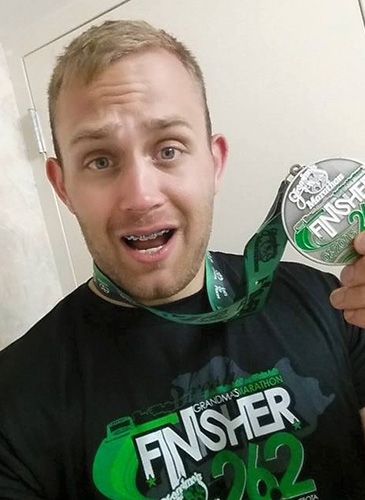 An unstable family life, heavy drinking, and bouts of homelessness made Nicholas Cook-Rostie’s teen years turbulent. And his high school record showed it.

In fact, the Lakeville, Minnesota, native graduated 412th in a class of 413 students. The idea of a four-year college degree seemed ludicrous—and the few universities he applied to thought so, too.

Today, Cook-Rostie is a marathon-running, scholarship-winning, first-year medical student at the University of Minnesota. His circuitous path over the last several years is as inspiring as it is dramatic.

After high school graduation, Cook-Rostie started serving in the National Guard and enrolled at Normandale Community College in Bloomington. He was also working at a fast-food franchise, but he was abusing alcohol to self-medicate for anxiety and soon flunked out of Normandale.

Working long hours as an assistant manager with no prospect for advancement, he began realizing this wasn’t the future he wanted.

Cook-Rostie reapplied to Normandale. Take 2 was different, he says. Not only did he study hard; he got extensively involved in campus life.

“I went all-out and joined every club I could,” he says. “I wanted to get out of the party scene.” He was also reading voraciously.

One day, a friend he met in student government at Normandale told him he’d make a good doctor.

“That was the first time the thought that I could be capable of that even crossed my mind,” Cook-Rostie says. “I never would have aspired to something like that.”

Meanwhile, he’d also taken up running. He and a coworker at the restaurant made a hundred-dollar bet about finishing a marathon, and Cook-Rostie became hooked.

“Running releases stress and clears your mind,” he explains. “Instead of going home and cracking a beer, you do a 5-mile run. And you feel way better after.”

After his academic turnaround at Normandale—he graduated with a 4.0—Cook-Rostie was admitted to the University of Minnesota, where he majored in biochemistry and participated in two competitive study abroad programs through the Pre-Health Student Resource Center’s Global Future Physicians series.

His international travel experiences, in India and in Thailand, sparked his desire to someday practice abroad part time, perhaps volunteering as a trauma surgeon.

“I love the sense of wonder I get from experiencing new cultures, new environments,” says Cook-Rostie, adding that he hopes to spend the rest of his time working in Minnesota, so he can “give back to the place that’s given me so much.”

And of course, he’ll keep running. He has run four marathons and hopes to complete one in every U.S. state. It’s an ambitious goal—but if you’ve read this far, you know that if anyone can do it, he can.

The Medical Bulletin is seeking compelling global health photos and stories by or about U of M Medical School students, alumni, or faculty members. Selected submissions will be published in future issues of the Medical Bulletin.

For more information or to submit your photo or story, email managing editor Nicole Endres at nendres@umn.edu.