Location: Kampala, Uganda
Mission: Ensuring that kids with malaria get the nutrition they need

Less than two months before this photo was taken last fall in Uganda, little Husina NamwaiyJe was terribly ill from malaria and iron deficiency, says Sarah Cusick, Ph.D., an assistant professor in the Department of Pediatrics’ Division of Global Pediatrics. But she bounced back after being treated at Kampala’s Mulago Hospital, with which the department has a robust research partnership. 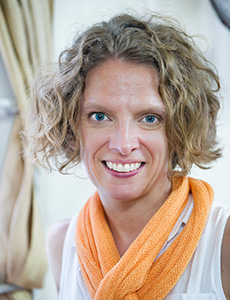 “I’m so amazed at how sick they can be, and then you see them a few weeks later and they’re back to their healthy kid selves,” says Cusick, who spends about two months per year in Uganda studying how deficiencies of certain vitamins and minerals interact with infectious diseases.

In September, a healthy Husina was back at Mulago for her last follow-up visit after participating in a study on iron absorption in children with malaria. While the nutrient is critical to a child’s growth and development, Cusick says iron supplementation can make a child more susceptible to malaria —or sicker if the child already has malaria. And that’s a problem in many parts of the world, like Uganda, where both malaria and childhood iron deficiency are prevalent.

Cusick’s study aims to determine the best time to give children supplementary iron — during treatment for malaria, which is the standard of care now, or four weeks after treatment ends, when their bodies might be better able to absorb it because of reduced inflammation.

The U’s Division of Global Pediatrics is committed to improving the health of children living in or coming from low-resource areas of the world through research, advocacy, and clinical work.

The Medical Bulletin is seeking compelling photos and stories featuring U of M Medical School students, alumni, or faculty experiences abroad. Selected submissions will be published in future issues of the Medical Bulletin. For more information or to submit your photo or story, email managing editor Nicole Endres at nendres@umn.edu.