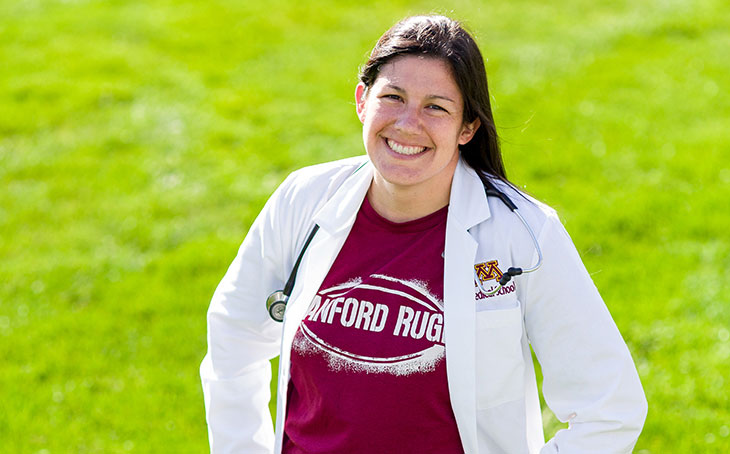 Lessons from the scrum

In her medical school application, Sarah Roe could have written about being the only girl on the football teams she played on in Antioch, California. She could have described her route from the public schools of that working-class town to Stanford University. Or she might have discussed how her Mexican/Native American heritage shaped her. Instead, she wrote about rugby.

She played the sport as an undergraduate and found it not only made her strong, it taught her something important: “In rugby, you go into a play full force and get buried, but the play is going on without you, and you have to catch up to help the team,” she says.

At Stanford, the high school valedictorian had struggled. “I was putting in over 100 percent effort and still not achieving the results,” Roe says. Although she learned from the experience, by the time she graduated, she questioned her goal of becoming a physician. “My confidence was rocked. I didn’t know if I had what it took.”

To test the waters, she decided to complete a master’s program in medical sciences at the University of South Florida. She did well, so with budding confidence, she started applying to medical schools. Her goal: “I wouldn’t just go there, people would know who I was. I wouldn’t get lost in the crowd.”

One application made its way to the University of Minnesota Medical School, Duluth campus, an unlikely prospect for the sun-lover. “Coming from California and Florida, I was really nervous about the weather.”

When Roe visited, however, her fears subsided. She was intrigued by the school’s focus on Native American and minority health. Moreover, she felt wanted. “They were so friendly and happy to have me there,” she says. “They knew my name.” Roe had visited other schools where that wasn’t the case. She realized the school in the northern state so far from home was actually a good fit, and she made it her No. 1 pick.

One of the first people Roe met when she arrived in Duluth in 2014 was Mary Owen, M.D., director of the Center of American Indian and Minority Health (CAIMH). Owen was teaching a course designed to give students feeling shaky about their academic skills a kick start. Roe signed up.

Owen, who is from Alaska, was aware that students like Roe, who come from different parts of the country or who are members of a minority group, have a lot to deal with when they arrive in medical school. “Just being from the West Coast, Minnesota seems foreign,” she points out. “And Native students are from a group of people who have been stereotyped and misunderstood for forever.” Yet Roe adjusted. “It didn’t take long before she had that confidence and was excelling in school,” Owen says.

In rugby, you go into a play full force and get buried, but the play is going on without you, and you have to catch up to help the team. You can’t think about your mistakes. You have to keep going. You have to be better for the next play.

Roe says she simply buckled down and worked, and asked for help when she needed it. “There’s so much support and encouragement from faculty, especially from the Native American program,” she says. And she loved what she was learning. It all had purpose.

“The two years in Duluth were way beyond what I expected, in a good way,” Roe says. She took advantage of opportunities such as working in the lab of assistant professor Andrew Skildum, Ph.D., who is studying whether an enzyme known to play a role in diabetes, PDK4, also plays a role in breast cancer. Roe developed a protocol that the lab is still using.

Skildum was impressed with Roe’s interest in the work. “She probably won’t be doing Western blot for the rest of her life, but she wanted to learn that technique so she could convey to patients the importance of basic science research,” he says. And Roe made an impression on the younger women working beside her, one of whom is now applying to medical school.

Owen says Roe was a role model for Native American teens as well. Roe, who worked with Native teens through CAIMH’s Health Science Academy one summer, says she wanted to communicate a message: “You can be Native and be in medical school.”

Roe’s hard work in Duluth was acknowledged last year when she was awarded Edwin Haller and Eva Victoria Olson, RN, Memorial scholarships. “It’s nice to be recognized,” she says. And with mounting debt, she’s especially appreciative: “Every bit helps to lower the financial burden that all of us face.”

With the confidence she gained in Duluth, Roe says she’s excited to be in the Twin Cities doing her clinical rotations. And she’s still applying the lessons she learned from rugby, pushing herself to share her clinical opinions and not fretting if she’s wrong. As she says, “You can’t think about your mistakes. You have to keep going. You have to be better for the next play.”

Third-year medical student Sarah Roe's rugby days taught her not to fixate on her mistakes but to make herself better for what's next. (Lead photo: Brady Willette)