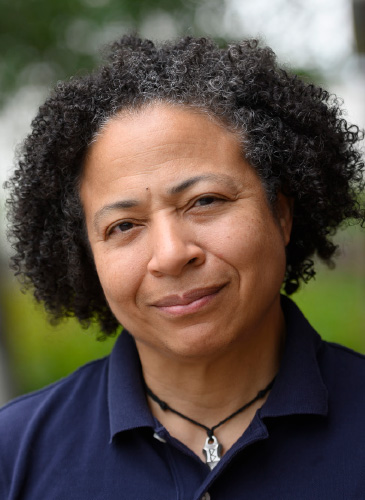 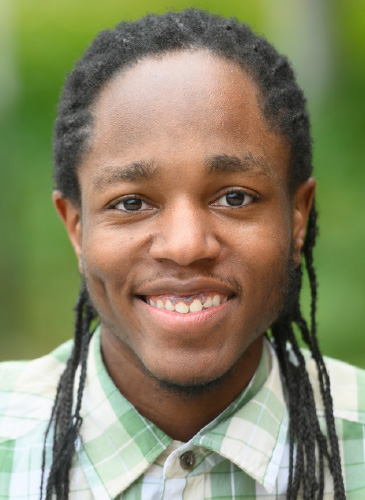 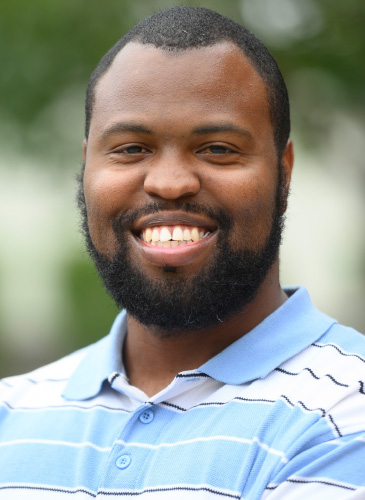 Christopher Allen was in fifth grade when his mom told him about a new program in the Twin Cities called the Ladder for kids interested in health careers. “I was like sure, OK, I’ll check it out. The first one was cool; it was focused on sports medicine. It was a hands-on thing, with sports doctors demonstrating some of what they do and explaining how they do it.”

Allen was hooked. That was in 2012; today he’s a scholarship-winning college freshman at Luther College in Iowa. He plans to become a gastroenterologist, and he credits the Ladder —and its founder, family physician and University of Minnesota Medical School assistant professor Renée Crichlow, M.D. — with preparing him to fulfill that dream.

The program is held on the second Saturday of every month at UROC (the University’s Urban Research and Outreach-Engagement Center) in North Minneapolis and seeks especially to serve students from under-resourced communities —many of whom, Crichlow says, might not realize they’re “physician material.”

Over the years, Allen has attended nearly every session of the Ladder. “I’ve gone to 99.9 percent of them,” he says. “I’m there unless I’m sick or there’s a family emergency.”

The Brooklyn Park, Minnesota, native learned about dozens of medical specialties and subspecialties, as well as other health careers like pharmacy, dentistry, nursing, and more, from professionals working in those fields.

“There are always a bunch of potential mentors there, and the fact that the topics change every month keeps it interesting,” Allen says.

The Ladder — open to students ranging from elementary school–age through college-age —was Crichlow’s brainchild, but she’s quick to note that a lot of people have been integral to building it. It’s free for participants, thanks to the fact that UROC donates space for each session, as well as the volunteer efforts of U medical students, residents, physicians, and other health care professionals who help organize and run the program.

Each session focuses on a different health field or medical subject but follows a similar format: the facilitator welcomes participants, who then introduce themselves; each person in the room chooses one of two quotes projected on a slide and thinks about how and why that quote resonates. Then participants gather into small groups for lunch, with mentors at each table. The family physician residents, with help from medical students, faculty physicians, and community physician volunteers, engage students in relevant hands-on activities.

Everyone, from grade-schoolers to physicians, identifies as a “medical scholar,” with the understanding that learning never stops.

“I might choose a quote that has to do with persistence,” says Crichlow, who practices at the University of Minnesota Physicians’ Broadway Family Medicine Clinic. “And I might tell my group my story: ‘I went to three undergrad colleges before I graduated. And I didn’t start medical school until I was 27. And now, I teach at one of the most prestigious medical schools in the country.’”

By design, the Ladder has been held in the same place at the same time since its 2012 inception, Crichlow explains. “A lot of these kids have really chaotic lives; they might come one time and not come back for another seven months. But they know when and where to find us.”

Any given month, between a dozen and 30 kids will attend. Students who show up aren’t required to commit to attending future sessions, Crichlow says — but like Allen, many come back.

Crichlow emphasizes that it’s not just the working physicians and other health professionals who do the mentoring at the Ladder. College students mentor high schoolers, who, in turn, mentor middle schoolers, who mentor elementary students. Hence the group’s motto: “Lift as you climb, build as you grow.”

“The long-term goal is to foster what we call ‘cascading mentorship,’” she says.

Discussions range from big-picture themes like tenacity and learning from failure to specific issues like what kind of high school classes to take, how to prepare for standardized tests, and how to navigate the college application process.

Everyone learns something, every time.

“I’m usually the oldest person there,” Crichlow says, “but I’m still getting something out of it.” 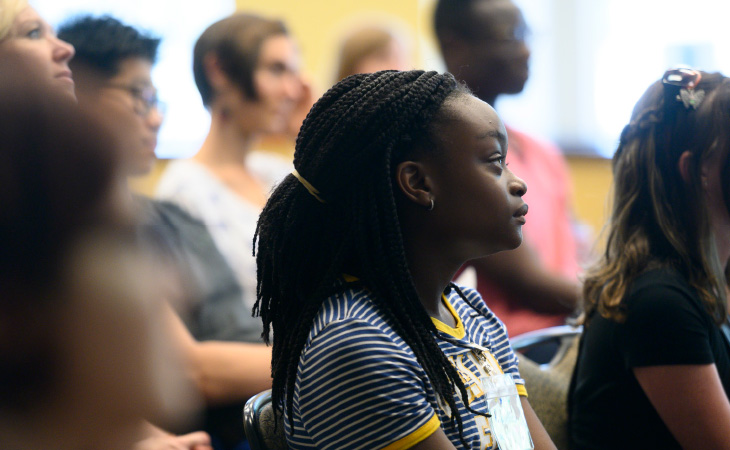 Many members of the Ladder’s volunteer corps have been engaged in the program for years, Crichlow says. Most find interaction with young, aspiring healers rejuvenating.

“It really helps our resident physicians with burnout prevention,” she says. “And the community docs who come — you can literally see them regenerate just by participating.”

It’s a labor of love for newly minted family physician Lonzale Ramsey, M.D. The Nebraska native just completed his residency in the U of M’s North Memorial/Broadway Family Medicine Clinic program; he chose to come to Minnesota in 2016 because of the Ladder.

“When I was looking for a program to do my training, I wanted to find one that really allowed me to engage with and give back to the community. North Memorial had the Ladder,” Ramsey says.

He has participated in most of the Saturday sessions since arriving in Minneapolis and now serves on the organization’s board.

“For minority students, in particular, it’s easy to see musical artists or entertainers or sports stars who look like you, but it’s less common to see people in professions like medicine and law,” Ramsey explains.

He says he enjoys the chance to show young students of color that this is a possibility. “For me, personally, it’s not just about moving forward; it’s also about reaching back and pulling somebody with you.” 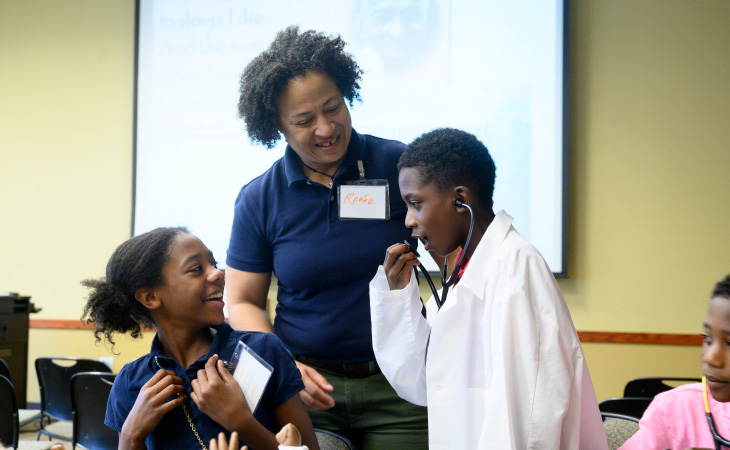 All kinds of support

For minority students, in particular, it’s easy to see musical artists or entertainers or sports stars who look like you, but it’s less common to see people in professions like medicine and law.

The Ladder’s unique formula has attracted attention around Minnesota and across the country. It has served as a model for similar programs at United Hospital in St. Paul, as well as in Ohio, Wisconsin, and California.

Crichlow and her team have created a tool kit for health educators who want to replicate the program. “So it’s almost a turnkey operation,” she says. “Every one of those places has modified it to suit their local needs.”

While the Ladder — with its reliance on volunteer efforts — costs just about $100 per session, Crichlow’s next goal is raising money to support individual student participants. All the curiosity, hard work, and persistence in the world won’t address the fact that getting to college, let alone medical school, is a dauntingly expensive prospect — one that can feel impossible for many kids, she says.

“There’s a real big tax on being poor; it’s a constant reducing valve,” Crichlow says. “We don’t quite have the meritocracy we’d like to. We can mentor people extensively, but if they feel there’s a barrier that can’t be overcome just by sheer will and hard work, a lot of times, people will just stop.

“We’d love to provide opportunities for people, things like money for SAT prep courses. Stipends for [otherwise unpaid] internships. Scholarships for taking MCAT classes. What are the financial burdens that no one thinks about? We’d like to provide the kinds of support you might have if you weren’t from a low-wealth, under-resourced community.”

That kind of support would enable more kids like Christopher Allen to see themselves as physicians, nurses, pharmacists, and physical therapists. Allen has the resilience: his interest in gastroenterology stems from the fact that he was born several months premature, a “one-pound preemie” with an intestinal system that wasn’t fully formed. “The doctors were like, ‘He’s going to have mental disabilities and physical disfigurements.’ I guess I proved them wrong,” Allen says.

If he can return to the Twin Cities during the summers when he’s in college, the longtime Ladder regular says he would love to come back and visit. “I could see myself being a mentor to younger folks.”

Watch a video introduction to the Ladder program.

The Ladder’s programming interweaves discussions about big-picture themes like tenacity and learning from failure with presentations on a wide range of health topics, including: