The print head of a 3-D printer scrolls back and forth with a whir, laying down a line of translucent gel 0.15 millimeters thick. A flash of blue light immediately cures the material, the first of 92 separate layers.

Soon, the outline of a nose appears.

“A nose this size will take about two hours,” says Angela Panoskaltsis-Mortari, Ph.D., a professor in the Department of Pediatrics, transplant specialist, and head of the University’s new 3-D Bioprinting Facility.

A three-dimensional life-sized nose is just a showpiece to test the new printer, the only 3-D bioprinter on campus. But Panoskaltsis-Mortari predicts that in just a few years, the facility and a few others around the country will be churning out basic body parts such as ears, skin, or blood vessels for transplantation. Some parts may even be manufactured with a patient’s own cells to avoid rejection by the immune system.

With the ability to print a structure that’s exactly the size and specifications a patient needs, bioprinting has the potential to transform regenerative medicine. “It becomes a part of personalized medicine,” says Panoskaltsis-Mortari.

Bioprinting is just one of the more revolutionary medical applications of burgeoning 3-D printing technology. In the last couple of years, 3-D printing has provided models for teaching and for designing medical devices. It has allowed doctors to better communicate with patients and parents about surgical procedures. And it has replicated natural human systems such as hearts and blood vessels to help doctors evaluate surgical techniques.

Doctors have printed orthotics, limb braces, and prosthetic arms. Surgeons use models to reduce a surgery’s duration. A printed stent was designed to dissolve and disappear as the patient’s trachea healed.

Three-dimensional printing, sometimes called additive manufacturing, fabricates objects directly from digital files. Software slices a 3-D image into dozens, hundreds, or even thousands of layers. It then instructs the printer to lay down layer after layer of material, usually some kind of molten plastic or polymer hardened by exposure to ultraviolet light.

Prototypes appeared in the 1980s but were prohibitively expensive. In the last four years, prices have plummeted. You can spend hundreds of thousands of dollars on a high-quality industrial 3-D printer. Or you can buy a basic unit at Walmart for $279.99.

As printers have become common, medical innovators have put them to use. Doctors have printed orthotics, limb braces, and prosthetic arms. Surgeons have produced model skulls to help shape reconstructive materials, reducing a surgery’s duration. They have implanted 3-D-printed parts — including a titanium pelvis — for reconstructive surgery. A printed stent, implanted to repair a collapsed trachea, was designed to dissolve and disappear as the patient’s trachea healed.

Paul Iaizzo, Ph.D., director of the University’s Visible Heart Laboratory, puts 3-D-printed models of hearts to use for reference and training. He stands next to a bank of whirring MakerBot Replicator 2x printers cranking out various projects.

Many of his lab’s models start out in the lab’s heart library, where more than 350 human hearts are preserved in formaldehyde in row upon row of sealed containers. The hearts are obtained as gifts from organ donors and their families either through the University of Minnesota Bequest Program or from LifeSource.

“It is a huge privilege for us to receive those,” says Iaizzo.

Some were healthy. Most were not. Some were diseased in unusual ways. Others are still attached to implantable heart pumps or contain other devices. The library is open to students and researchers, who can use the hearts to learn basic cardiac anatomy, research a rare heart condition, or design a medical device.

Before 3-D printing, researchers examined the actual hearts, donning gloves and rinsing out preservative. Now, many of these hearts have been scanned by MRI and replicated, down to their valves and tiny trabeculae, by a 3-D printer.

The students who make the models learn both cardiac anatomy and the process of imaging and printing. Says Iaizzo, “They’re being hired right out of the lab with their expertise in anatomy and the ability to make these models.” 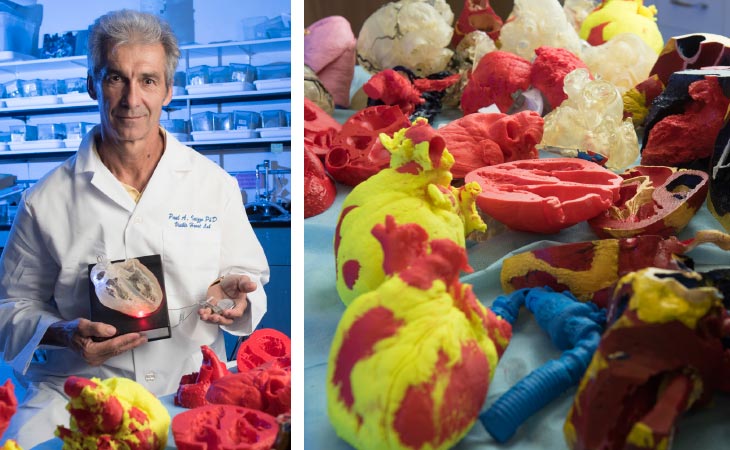 The U’s Visible Heart Lab has printed dozens of hearts modeled after those in its heart library. Here Paul Iaizzo, Ph.D., holds one of his favorites — a silicon model with an implanted pacemaker. (Photos: Scott Streble)

From theoretical to tangible

Robroy MacIver, M.D., M.P.H., a pediatric cardiothoracic surgeon at University of Minnesota Masonic Children’s Hospital, 3-D-prints a life-sized heart from his young patient’s MRI or CT scans. Then he can describe to the parents the defect and the surgery he is about to perform.

“Showing them a CT scan on the screen, you lose a little bit — the size for one thing, how small a vessel is or how small the heart is,” says MacIver. “When you have the actual heart printed, you can show them what you’re talking about. It’s much more tangible.”

MacIver implants left ventricular assist devices, pumps that boost the output of a weak heart. A surgeon has some choice in where to join the pump’s output to the patient’s aorta, and he wondered how the location of the pump might affect the transport of blood clots, especially to the brain, where they could cause a stroke. 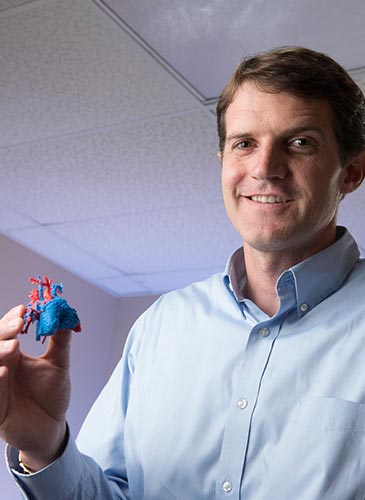 MacIver consulted with Filippo Coletti, Ph.D., an assistant professor of aerospace engineering and mechanics at the U, who uses MRI to study the flow of fluids through 3-D-printed replicas of various systems, from gas turbines to human lungs. “Our department has a strong focus in fluid mechanics across the board — not only in things that fly but even flow in biological settings, including the human body,” says Coletti. “The lungs are three-dimensional and extremely complex. If it wasn’t for 3-D printing, I wouldn’t be able to fabricate a replica.”

To help MacIver evaluate the optimal location for the pump connection, Coletti 3-D-printed replicas of the aortic arch of some of MacIver’s patients. He scanned the models with an MRI as water flowed through the passageways. He could change the location of the connection at will.

“Robroy’s a cardiac surgeon, so he doesn’t get a second chance,” says Coletti. “He opens up people and he has to make the right decision; whereas I can play Frankenstein and make a ‘surgery’ on my 3-D replicas — no one is alive in the first place. If you tell me a clot is there and I know the flow pattern, I have a pretty good shot at telling you where the clot is going to go.”

In another case, an orthopaedic surgeon planned to replace a patient’s artificial hip. But there wasn’t much bone left to anchor the new joint. So the surgeon brought CT scans of the patient’s hip to the University’s Medical Devices Center, which printed a replica.

“He wanted to practice — to see in 3-D what he was working with before he started,” says Darrin Beekman, the center’s lab supervisor. “He actually delayed the surgery until the print was available so he could strategize on how best to do that.”

While having a 3-D model to practice on can be extremely helpful, a lifelike model that moves like the tissue a doctor will be working with could be invaluable.

Robert Sweet, M.D., an associate professor of urology in the Medical School and director of the U’s Center for Research in Education and Simulation Technologies (CREST), has worked on various “simulators” to train students, doctors, and other health care providers. Among his current projects is creating a “next-generation mannequin,” funded with a Department of Defense grant.

“This is a project that really came out of need,” says Sweet. Until now, training mannequins were made with materials that might look or feel right, but “they’re all based on subjective data,” says Sweet. As a result, they do a poor job of replicating the human body.

So Sweet is developing a human tissue database. His lab tests cadaver tissue for measurable physical characteristics (such as indentation and tearing), appearance, electrical properties, and thermal conductivity. Eventually, the “library” will include data on tissues that are healthy and diseased, young and old, male and female.

“Data like that will help us do a lot of other things, such as [make] predictive models,” says Sweet. It will inform computer simulations that might replicate a particular patient’s anatomy and predict the effectiveness of, for example, energy-based therapies for a tumor.

But the data will also be used to create an incredibly lifelike and responsive mannequin. Sweet plans to work with a 3-D printer manufacturer to develop materials to imitate tissues based on the characteristics in his database. These materials will be printed with 3-D printers to create mannequins useful both for training and for “patient rehearsal” (that is, practicing a particular surgery).

“None of [the models] at this point are really close to actual soft tissues, but that’s the Holy Grail that we’re getting closer and closer to,” Sweet says. “It becomes a pathway toward that goal of personalized medicine, which is one of the big themes of the future of medicine — predictive and personalized.” 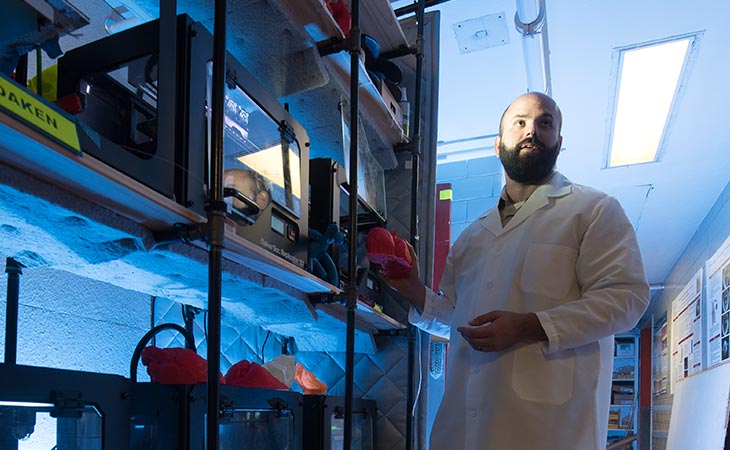 For all the excitement about 3-D printing, the possibility of printing with lifelike organic material, including a patient’s own cells — so-called bioprinting — is perhaps most novel.

Bioprinting may solve several problems, such as chronic shortages of organs and tissue for implants, and poor genetic matches between donor and patient that lead to tissue rejection.

With 3-D bioprinting, transplantable tissues and simple structures will be made to order and printed on demand, perhaps seeded with the patient’s own cells.

“Any shape you want, any size you want,” says Panoskaltsis-Mortari. “I’ve been thinking about it for many years, ever since I saw some of the first reports.”

Then a bioprinter fell into her lap. The young founders of BioBots gave printers at deeply discounted prices to 20 research facilities around the world — including Panoskaltsis-Mortari’s lab.

Bioprinting may solve several problems, such as chronic shortages of organs and tissue for implants, and poor genetic matches between donor and patient that lead to tissue rejection.

“They wanted to see what people would come up with,” she says. “It’s a nice strategy. That way, people are free to follow whatever scientific approaches they’re taking.”

With the printer, other aspects of Panoskaltsis-Mortari’s bioprinting facility fell into place, including funding from the University’s Medical School, Lillehei Heart Institute, Institute for Engineering in Medicine, and Stem Cell Institute.

The team is beginning work on 3-D-printed pieces of artificial esophagus and trachea to sew into an animal such as a pig.

There are plenty of problems to solve. What kind of biocompatible material will be tough enough to hold sutures? Will it support cell growth? What’s the best way to seed cells on the piece? How thick can a printed part be? “Hopefully, we can coax blood vessels to grow into it, to provide nutrients to it,” Panoskaltsis-Mortari says.

How long before 3-D-printed vessels, tubes, skin, and other simple body parts will be printed and implanted in humans? Just a few years, she predicts. “Not long.”

One of the earliest bioprinting projects at the U? Producing simple tubes made from esophageal tissue — with hopes that one day the process will be refined enough to print sections of esophagus for transplantation, says Angela Panoskaltsis-Mortari, Ph.D. (Photo: Scott Streble)

Wagner to lead new U Institute for Cell, Gene, and Immunotherapy

John E. Wagner Jr., M.D., will connect the U of M’s work to industry and the community and further establish the University as a leader in this field.