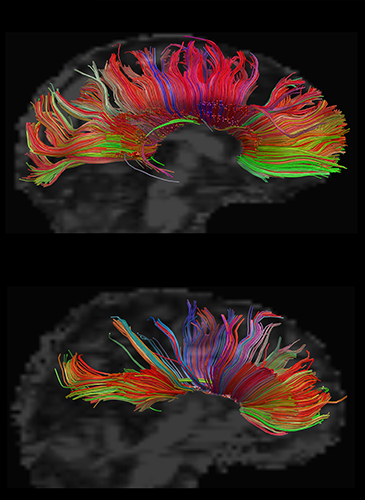 A common preventable birth defect, fetal alcohol spectrum disorder (FASD) describes a number of cognitive impairments and physical abnormalities that can occur in children born to mothers who drink alcohol during their pregnancies. An estimated 2 to 4 percent of the population is affected by FASD.

With a new $1.7 million grant from the National Institute for Alcohol Abuse and Alcoholism, Jeffrey Wozniak, Ph.D., associate professor of psychiatry at the University of Minnesota Medical School, aims to better understand how prenatal alcohol exposure changes brain networks over time.

“This area of research is relatively young, so there is a lot to learn,” says Wozniak. “We really have no way to predict how the disorder will progress in an individual or what happens to specific parts of the brain as normal development occurs.”

Wozniak will scan the brains of about 90 children ages 8 to 16 who are affected by FASD. Then, a year and half later, he’ll perform another round of brain scans in the same group. He will analyze the changes in the scans to determine how the brain organizes its networks, how those networks differ from those in healthy brains, and which specific brain circuits appear to be most affected.

“Sometimes FASD presents with physical symptoms — like smaller eyes, changes to the lip and mid-face, ear abnormalities, and other telltale signs — but in most cases, it impacts a child in ways we cannot immediately see,” Wozniak says. “If we know how and where FASD affects the brain, we can provide a more accurate early diagnosis.”

In doing so, Wozniak adds, physicians will be able to improve the quality of life for children with FASD.

The state-of-the-art neurosurgical operating suite will make Minnesota home to some of the world’s most technologically advanced surgical capabilities.

New companies are helping Medical School discoveries reach the patients and clinics they were designed to serve.