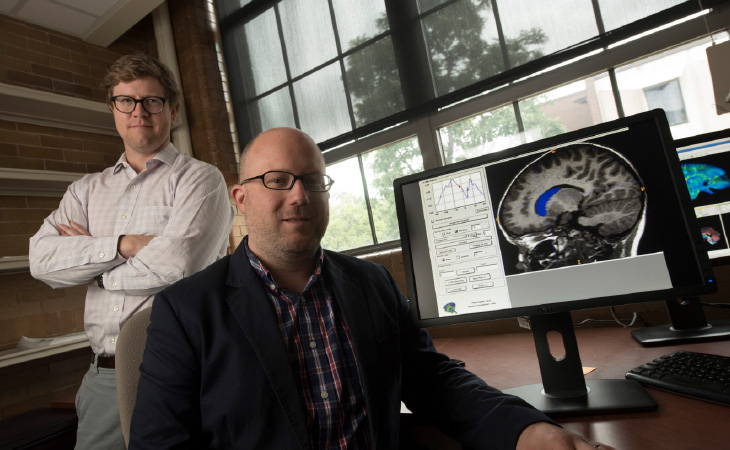 Earlier diagnoses lead to earlier intervention, and early intensive interventions have been shown to improve outcomes.

The University of Minnesota was awarded two new grants from the National Institutes of Health in May for research that could lead to earlier, more accurate diagnosis of autism spectrum disorder (ASD).

ASD is difficult to diagnose early, as behavioral signs like social communication deficits or restricted and repetitive behaviors aren’t usually observable until at least age 2. And because the average age of diagnosis is around 4 nationally, children typically don’t receive therapies until later in their development, when the brain is less malleable.

With a $3.7 million grant, a U team aims to develop population-based risk profiles that could predict whether a child will develop ASD or related conditions. Researchers will collect behavioral data and brain scans from children at various points between ages 18 months and 3 years.

“Earlier diagnoses lead to earlier intervention, and early intensive interventions have been shown to improve outcomes,” says Suma Jacob, M.D., Ph.D., an associate professor of psychiatry in the Medical School who coleads the project with Jed Elison, Ph.D., an associate professor of pediatrics in the Medical School and child psychology in the College of Education and Human Development (CEHD).

A separate $9.5 million grant supports the Infant Brain Imaging Study Network, of which the University is a data collection site. This group aims to develop a clinical MRI test for children at high risk of autism that would be able to predict an ASD diagnosis before the child turns 1. To develop the test, researchers will compare the predictive ability of MRI measures with behavioral measures of autism.

Both grants build on previous research that suggests patterns of brain activity in high-risk, 6-month-old babies may accurately predict those who will develop ASD by age 2.