A University of Minnesota surgeon steps up to challenge the culture of silence that shields shockingly high rates of physician burnout and suicide in the U.S.
By Amanda Brower

“The bedside clock reads 3:13 a.m. There are no noises, nothing unusual. Then I realize I am thinking of [medical student] Kaitlyn’s heartfelt letter to her parents written before her suicide. Why can’t I get her story out of my head?”  –David Rothenberger, M.D., “Breaking the Culture of Silence on Physician Suicide,” 2016

“I didn’t know Kaitlyn. She was not in our medical school, but it was her tragic story that compelled me to confront our medical culture,” says University of Minnesota surgeon David Rothenberger, M.D. Kaitlyn’s was one of 53 suicide letters from medical students and physicians that Pamela Wible, M.D., had compiled in her book Physician Suicide Letters — Answered. Rothenberger recalls, “On that sleepless night, I asked myself, ‘How many other Kaitlyns are out there in our medical schools? Our hospitals? The medical profession?’”

He decided he could no longer stand on the sidelines. Instead, he made a commitment to educate himself and others about the high rates of physician burnout and suicide that plague the medical profession, bringing this taboo subject out from the shadows. But he knew it would be a monumental task to change a culture ingrained at every level of the health care system.

Jakub Tolar, M.D., Ph.D., dean of the University’s Medical School, is keenly aware of the toll that physician burnout can take, ranging, he says, “from something as simple as a doctor being too stressed to return a patient’s call at the end of the day, to substance abuse, to leaving the profession, to suicide.”

To help combat the problem at the University, he recently appointed Rothenberger as senior adviser for physician well-being. In his new role, Rothenberger will advise the Medical School’s leadership team on policies, programs, and practices aimed at reducing burnout and promoting wellness.

“Because medicine is both a high-intensity field and an extremely personal one, its impact extends beyond physicians to the patients they care for, the faculty and staff they interact with, and the students they teach,” Tolar says. “We want to create an environment where we allow people who are expected to be compassionate toward others to first be compassionate to themselves. Dr. Rothenberger will ensure that compassion remains at the forefront of our mission.”

Rothenberger reached two milestones in March 2017: He turned 70, and he completed his term as chair of the Medical School’s Department of Surgery after four years in that role and 39 in the department. But some of his most courageous work was just beginning.

“Our profession is in the midst of a crisis, an epidemic crisis of epic proportions,” says Rothenberger about physician burnout. “But most in our profession do not yet acknowledge its existence, let alone the obligation to address it.”

The data are clear. At any given time, one in three physicians experiences burnout, a syndrome characterized by emotional exhaustion, depersonalization, and a sense of reduced personal accomplishment; it often results in drug and alcohol abuse, disruptive behavior, broken relationships, workplace conflicts, and, ultimately, withdrawal. Worse, an estimated 400 U.S. physicians commit suicide annually. Alarmingly, medical students have an equal, or even higher, risk of burnout, depression, substance abuse, and suicide.

A 2009 American College of Surgeons (ACS) study found that a stunning 40 percent of physicians surveyed met the diagnostic criteria for burnout, while 30 percent screened positive for depression, and 6.4 percent reported thoughts of suicide.

“Ignoring the problem will continue to have lasting consequences,” Rothenberger stresses, “not only for burned-out physicians but also for their patients, their colleagues, and their families.” 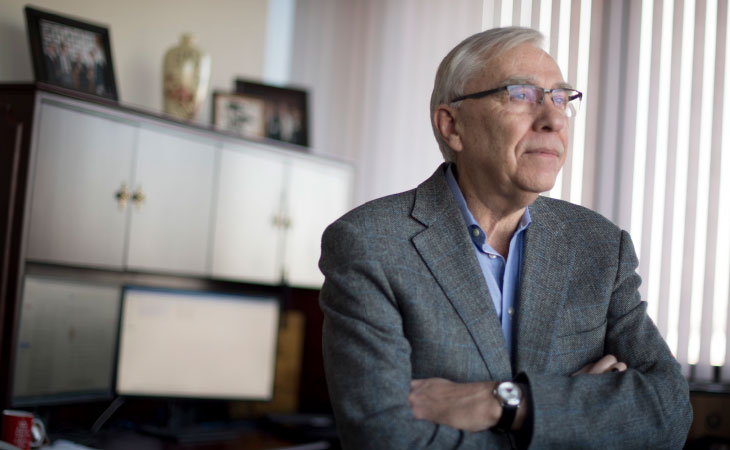 When Rothenberger was invited to speak at the ACS Clinical Congress in 2014, he wasn’t sure how his colleagues would react to the topic of burnout. “I thought no one would show up or that those who did would throw tomatoes at me,” he says. Instead, the large hall was filled to capacity. Afterward, almost a hundred physicians spoke to him or emailed him, sharing their personal struggles with burnout. He was encouraged that change might be on the horizon.

Then, in 2016, Rothenberger coauthored the National Academy of Medicine (NAM) discussion paper “Breaking the Culture of Silence on Physician Suicide.” He and his three coauthors wrote heartbreakingly, each from their own perspective — surgery, nursing, medical training, the clergy — about Kaitlyn’s suicide.

“We reasoned that if NAM would get involved,” says Rothenberger, “it could do the same thing for the issues of burnout and well-being as it had previously done for safety in medicine. [The 1999 landmark report “To Err Is Human” effectively increased awareness about deaths caused by preventable medical errors.] Our intent was to make an emotional appeal that no one in medicine could ignore.”

In 2017, NAM held the first public meeting of the newly formed Action Collaborative on Clinician Well-Being and Resilience. NAM President Victor Dzau, M.D., welcomed the audience by confessing that he hadn’t really understood why well-being and resilience should be a concern to NAM — until he read “Breaking the Culture of Silence on Physician Suicide.”

Dzau followed up a year later with a perspective piece in the New England Journal of Medicine titled “To Care Is Human — Collectively Confronting the Clinician-Burnout Crisis.” As he and his coauthors pointed out, “‘To Err Is Human’ identified high rates of medical error … and spurred systemwide changes that have improved safety and quality. Today, we need a similar call to action.”

Rothenberger is encouraged by NAM’s actions. “I’m sure many other factors led to its decision to address physician burnout, but it was nice to learn that our strategy had an influence on their leaders and that they’ve now committed major resources and energy to this problem.”

Ignoring the problem will continue to have lasting consequences, not only for burned-out physicians but also for their patients, their colleagues, and their families.

John Andrews, M.D., the Medical School’s associate dean for graduate medical education, heartily welcomes Rothenberger to his new advisory position. And he welcomes new guidelines from the Accreditation Council for Graduate Medical Education (ACGME) that explicitly acknowledge its “obligation to help physicians in training find meaning and joy in their work, while also providing them with the resources necessary to care for themselves and their patients.”

Andrews also supports realigned efforts to improve physician well-being at the institutional level. The time to begin mitigating stressors that cause burnout, he believes, is in medical school.

“We are in the infancy of addressing the problem. No institution has figured it out, but we’re making a good effort here,” he says.

Since Rothenberger now frequently delivers lectures on physician burnout, he has become even more aware of the depth of the problem.

“After giving a talk, I often have physicians approach me to share their struggles,” he says. “There have been many painful conversations with those who are experiencing real despair. I was even approached recently by someone who was thinking about taking their own life.” Working with other University professionals, Rothenberger was quickly able to get that person much-needed help.

Thomas Gilliam, R.N., M.B.A., administrative director of the David A. Rothenberger Leadership Academy (formerly the Emerging Physician Leaders Program), recently teamed up with Rothenberger to teach a graduate class of physicians, other health care providers, and administrators. During one discussion, Rothenberger outlined the signs of burnout. After class, he and Gilliam were approached by a student who had realized that every sign applied to him, without any previous inkling that his symptoms added up to bona fide burnout.

“The problem is a cultural one,” says David Darrow, M.D., M.P.H., a fifth-year neurosurgery resident and member of the University’s ACGME Resident Leadership Council. “There’s a myth that physicians are superheroes, that we can’t make mistakes. And just trying to identify the problem puts residents in a vulnerable position.”

Darrow’s research now focuses on innovative methods to effectively treat people struggling with mental health issues. At the policy level, he advocates for his fellow residents throughout the Medical School, because he knows that they are hesitant to open up about mental health.

As he says, nationwide, about 30 percent of residents have depression. “But what do you do about it? Who would they see for a mental health appointment, and when?”

These are just a few of the questions Rothenberger hopes to answer as he continues to push for solutions. In his moving essay in “Breaking the Culture of Silence on Physician Suicide,” he laid out the challenge to his colleagues: “Do we have the courage and will to break through the culture of silence, end institutional cover-up, and commit to finding effective ways for the healing profession to care for ourselves as well as for our patients?”

He is heartened that, at the University of Minnesota, the answer is now a resounding yes.