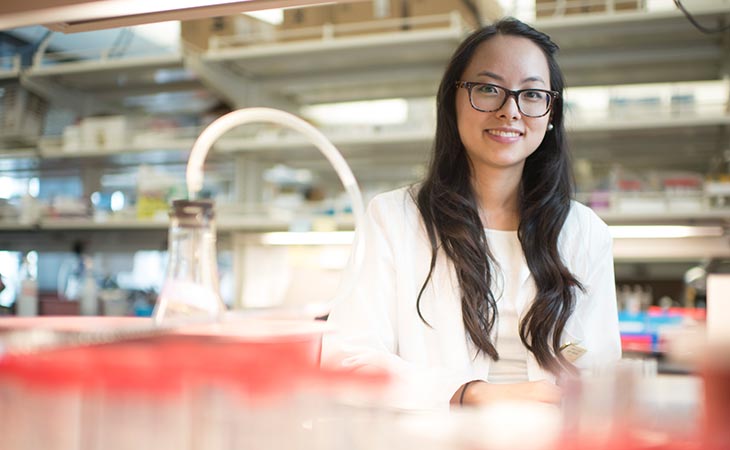 Rebel in a white coat

Don’t be misled by Brenda Her’s kind demeanor and petite stature. The second-year medical student, Dean’s Scholar, and Tae Kwon Do green belt is a force to reckon with — and has a stubborn streak that helped push her into medicine.

The oldest of 11 children in a traditional Hmong family, Her says she was raised under a different set of expectations than her brothers were.

“Hmong culture is patriarchal: women are expected to cook, clean, and care for the children,” she says. “But I realized that my strength was doing well in school.” That not only fired her intellectually but also served as a refuge from domestic responsibilities.

Her’s parents nudged her toward becoming a nurse, and although she enjoyed the nursing prerequisities she took as an undergrad, it was an organic chemistry class — she eventually earned a bachelor’s degree in biochemistry — that really got her thinking about medical school.

“And it was a little bit of a rebellion,” she adds with a smile.

A Twin Cities native, Her enjoyed her last two years of high school in Roseville — after turbulent freshman and sophomore years in a small Wisconsin town where her family experienced overt racism. One of her younger brothers, an eighth-grader at the time, was constantly picked on.

“The school labeled it as bullying instead of racism. I didn’t like that; I felt there was more to the story than just bullying. Students would come by our house with a bat and hit our mailbox.

“Roseville was better. I felt like I belonged and I was safe.”

A sense of belonging

The U immediately felt like home, too, Her says. “I only applied to four [medical] schools, but the U was my number-one choice. Faculty and my classmates are so supportive — everyone wants to help each other. You hear stories from other schools; it’s not like that everywhere else. Here, I feel like I can be competitive with myself.

“And I love the Twin Cities. I love how diverse it is; I love learning about different cultures. I especially like working with people from underserved communities.”

She’s actively sought such engagement for years, volunteering in college as a tutor at Project for Pride in Living in Minneapolis, where she worked mostly with Somali students. “Somali culture is similar in some ways to Hmong culture; I really enjoyed that.”

Her continues that mentorship role today, both formally through The Ladder — a North Minneapolis health professions mentorship program run by the U’s Urban Research and Outreach-Engagement Center — and informally, as a role model and academic coach for her younger sisters. She also fulfills her passion for serving others at the U’s Phillips Neighborhood Clinic, which she calls “a great way to learn about medicine in an interprofessional team environment.” The student-run clinic includes not only medical students, but also students in nursing, pharmacy, social work, and other health fields who work together to provide free care to this underserved Minneapolis community.

Her speaks gratefully of Glen Nelson, M.D., the retired physician who funded her Dean’s Scholarship, and of the many faculty who are supporting her. The merit-based scholarship was designed to keep especially high-achieving prospective medical students in Minnesota.

“During my first semester, I really started to doubt myself — but then I reminded myself, they gave me that scholarship because they believed in me,” she says. “Having them trust me inspires me to want to make them proud. One day I hope to be able to give back to other students in the same way.”

Her was thrilled to earn a prestigious summer research scholarship through the U’s Lillehei Heart Institute, working with stem cell researcher Rita Perlingeiro, Ph.D., to spur muscle regeneration as a path to treating muscular dystrophy.

Proud of her Hmong heritage, Her hopes to set an example, throughout her career, for other Hmong youth — including her younger sisters, who often come to her apartment to study. That pride and respect deepened two years ago on a trip to Thailand, the country of her parents’ birth.

“I like the food and the clothing and the spiritual practices,” Her says. “But I don’t like the gender roles. That’s something I won’t pass on to my children.”

Helping Hmong American youth preserve their culture in the 21st century while inspiring girls to achieve their full potential is a mission that strongly appeals to the aspiring primary care provider.

Helping Hmong American youth preserve their culture in the 21st century while inspiring girls to achieve their full potential is a mission that appeals to the aspiring primary care provider.

“I want to help build a bridge between the younger generation and the older generation, because I feel that’s really important. I love hearing my grandparents’ stories and my parents’ stories. They have a lot to teach us, like how to work hard in life, how to take advantage of every opportunity.”

Those are lessons Her has clearly taken to heart.

To make a gift to support Medical School scholarships or to learn more, contact Dan Brasch at the University of Minnesota Foundation: dbrasch@umn.edu or 612-624-6453.