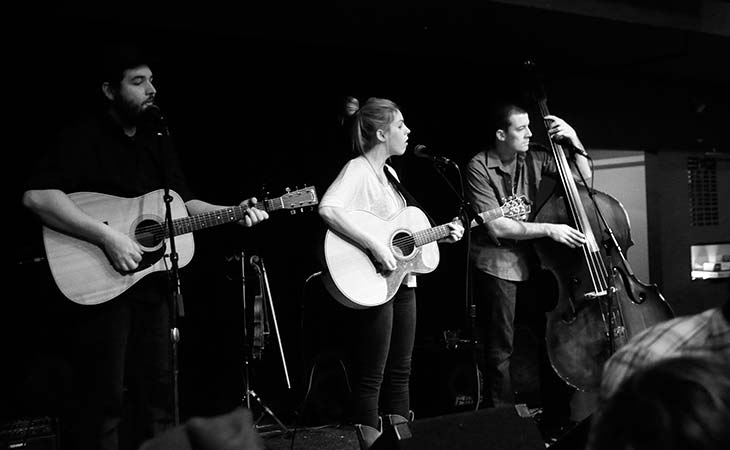 Stringing it all together

“Medicine is an art form,” he says. “There has to be that human connection. Art is a way that people can connect on a more intangible level; hopefully, you can offer something that helps people heal on their own terms.”

Donoghue, a recipient of the Hyman Horwitz Endowed Scholarship and Thomas P. Cook Scholarship this year, says he is grateful for his “other” life as a musician, which helps enrich his study of medicine. He’s also thankful for the Fisch Art of Medicine Student Award he received last year, which he’s using to enable his acoustic folk/Americana band, the Lowland Lakers, to record its next album.

Music isn’t just a passing fancy for the Chicago-bred Donoghue. Nudged by a teacher to try the upright bass in third grade, he has played in a bluegrass trio, various jazz ensembles, a salsa band, an eight-piece Motown group, and the University Gospel Choir in Madison. (He was even in a lounge band that got to open for then-presidential candidate Barack Obama at UW–Madison, where Donoghue studied political science as an undergraduate. “Still the best picture I’ve got,” he says, pulling out a photo of himself with the aspiring president.) 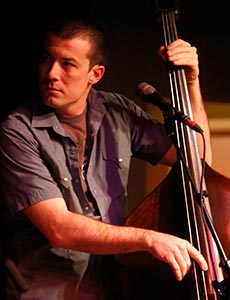 Donoghue was on the rowing team at UW, and after graduation, he worked for two years as the team’s equipment and facilities manager. Later, he worked in sales, taught sailing in Duluth — where his future wife was attending medical school, and where he took the science prerequisites he needed to apply, too — then worked as a substitute teacher in the Minneapolis Public Schools.

Through it all, even as medicine began looking like his life’s calling, Donoghue has played music.

“Music and medicine overlap really well. The medical world can be sterile, cut-and-dried. Music complements that: it’s not data-driven. The question is, does this speak to you in some way? Does it make you feel something?” Donoghue says. “I just came off my pediatrics rotation, and music therapy provides a great break from the reality of being in the hospital. The kids love it.”

Donoghue first met his fellow Lowland Lakers, Nate Case and Haley Rydell, when all three were living in Duluth. Case and Donoghue played together in an alt-country/rock band called Silverback Colony; later, when both ended up living in the Twin Cities, Case and Rydell tried to lure Donoghue into joining their new band. It took awhile; at the time, he was a first-year medical student.

“I said I just couldn’t manage it,” Donoghue recalls. “But my second year, they asked again, and I felt like things were under enough control to try it.”

The band performs regularly at Twin Cities venues like the 331 Club, Icehouse, and the Como Pavilion, as well as at established festivals like the Stone Arch Bridge Festival of the Arts.

“Haley and Nate are both excellent musicians [and] talented songwriters,” Donoghue says. “It’s a privilege to be able to play with the level of musicians I play with while basically being a moonlighter.”

Harking back to his undergraduate political science major, Donoghue also served last year on a blue ribbon committee appointed by Gov. Mark Dayton to advise him on how to enhance the U Medical School’s national profile. Donoghue’s role was helping Reneé Crichlow, M.D., conduct research and draft white papers for inclusion in the group’s final report, which led to $30 million in new funding to the Medical School from the Minnesota Legislature.

Public policy is an abiding interest for Donoghue. His family historically has been politically active; his father was an electrician and community leader, and his maternal grandfather served as an alderman and state senator.

“My dad very much believed in everybody getting a fair shake, everybody getting equal access to opportunities to better their lives. That has really stuck with me,” says Donoghue, who is keenly aware of the social disparities plaguing the Twin Cities. “I think a lot about how we could increase the whole population’s access to health care.”

Plus, playing alongside full-time musicians, he sees up close how chronic conditions or health crises can spell ruin for people who lack health coverage.

When Donoghue is at home, he’s hardly idle. He and his wife welcomed a daughter last fall, and they’ve been renovating their south Minneapolis home with the help of classmates.

“Sleep is the biggest challenge, and it’s why I’ve had to scale back,” Donoghue says. “I can’t [regularly] play a show at midnight and then get up at 6 for rotations. But I’m really fortunate to be where I am.”