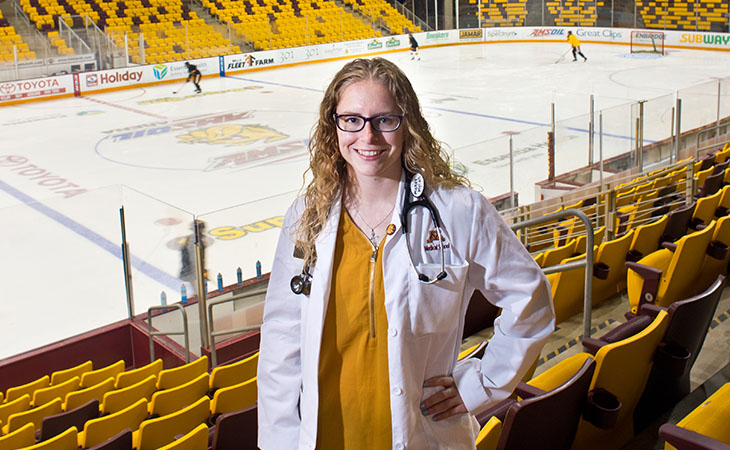 It’s oversimplifying to say that hockey is responsible for steering Mickey (Michelle) Moran toward a career in medicine. But it might be fair to credit the sport with an assist.

The second-year student at the Medical School, Duluth campus grew up in a family that lives and breathes hockey. The Morans —  who moved from the state of Virginia to Sartell, Minnesota, in 2007 — love playing, watching, and officiating the sport.

A freak injury her mother sustained on the rink when Moran was just 7, and the ingenuity with which a Cleveland Clinic medical team diagnosed the puzzling condition it caused, inspired the young athlete to see herself as a future physician.

Moran’s mother, Kris, was training for the 2002 Salt Lake City Olympics near the family’s D.C.-area home, playing in a men’s pickup league, when a former NHL player on the opposing team checked her hard, throwing her some 15 feet across the ice.

At first, her mother seemed fine, Moran remembers. But something wasn’t quite right.

“Then these symptoms started happening; whenever she’d work out, she’d get dizzy and pass out,” Moran says. “As she trained harder and harder, the symptoms got worse; she’d be taking three naps a day. Her heart rate and her blood pressure would plummet with exercise.” Her doctors were baffled.

“At one point, they told her she probably had about six months to live,” Moran says. Her mother was also coaching a 19U hockey team at the time, frequently traveling to tournaments across the East Coast and Midwest, and young Mickey began accompanying her. “My job was to explain to others what was going on. I sort of understood [how dire the situation was], but not really.”

The Olympics were out of the question.

Finding answers — and a career path

Seeking answers, Moran’s parents contacted the Cleveland Clinic. “We went without a referral — just called, made an appointment, and drove up there from Virginia,” Moran recalls.

“[The medical team] came back with a diagnosis of a vagus nerve injury. It’s the cranial nerve that controls blood pressure and heart rate,” Moran explains. There was no fixing the injury itself, but the Cleveland cardiologist proposed treating its effects with a combination of medication and a pacemaker — an approach that has proven successful.

The way the doctor involved students and residents in the consultation impressed Moran. “To have so many people bouncing ideas off each other … I think it was extremely helpful in this case,” she says. “To see how much he included [the students], to see this group of people care for my mom, I was like, ‘I want to do this.’”

Today, Moran pictures herself in primary care, ideally as a sports medicine specialist at a rural family clinic. Interested in making youth hockey safer, she has launched a project of her own design, a database to track youth concussions and, eventually, shape policy to reduce them. Her mother, a software engineer for Minnesota State (formerly MnSCU), is helping her with the technical aspects.

Moran is a grateful recipient of the 2017 Peter and Virginia Torreano Scholarship, which allows her to devote time to both the database project and her medical studies.

“It’s huge. You’re not worrying about, ‘Could I get a side job?’” The confidence boost was big, too. “Honestly, when I read the letter, I couldn’t believe it. You start to second-guess yourself. ‘Did I really do the right thing? Can I handle this?’ [The scholarship] was just so reassuring. Someone else thinks I can do this!”

Of course, Moran still plans to find time for sports, too. Come winter, you might find her on the ice, wielding a broom instead of a hockey stick as she pursues a new interest — in curling, naturally.

To support scholarships in the Medical School or to learn more, visit med.umn.edu/philanthropy/scholarships or contact Dan Brasch at dbrasch@umn.edu or 612-624-6453.