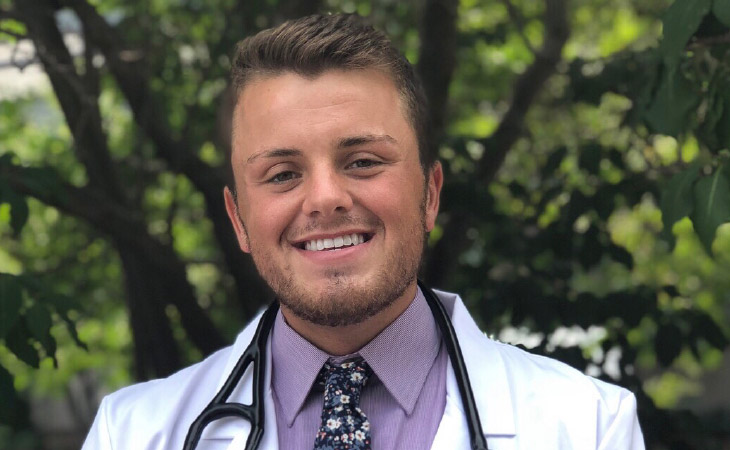 Mitchell Moe has a clear vision of the not-too-distant future.

If things go according to plan, he will be a family doctor practicing somewhere in rural Minnesota. Colorful art and photos of ethnically diverse families or same-sex couples will adorn the walls in the clinic where he works. Signs that read, “All are welcome here” will be visible as soon as patients walk through the door. And when they sit down with Dr. Moe, they will feel comfortable talking to him about whatever is on their mind.

Moe knows what he wants because it’s what he did not have as an LGBTQ individual growing up.

“When I first started having thoughts about my sexuality, in my young mind I thought, ‘This is a medical condition, so I should talk to a doctor,’” Moe recalls. “But I never felt fully comfortable enough to do that.”

Now, as a second-year medical student at the University of Minnesota Medical School, Duluth Campus, Moe is dedicated to becoming a doctor who values diversity and inclusivity as integral parts of his practice.

“I want to create a safe space for people who are going through similar experiences to mine,” he says.

Becoming that kind of physician starts with understanding diverse communities of all kinds, not just the LGBTQ community, Moe says.

Last year, as the president of his medical school class, he spearheaded a lunchtime lecture series that brought doctors who care for underrepresented populations in Minnesota to the Duluth campus to share their perspectives. One physician spoke about caring for people experiencing homelessness in the Twin Cities, while another talked about his focus on transgender health care in Duluth. The lectures were an opportunity for students and faculty alike to learn.

“They sparked a lot of interesting and important conversations on campus,” Moe says. “And it’s great to see so many of our faculty members who still practice in town become engaged in these topics.”

The Medical School’s curriculum already includes material about the state’s Native American communities and the unique health concerns they face, and Moe says school leaders have been supportive of his and his classmates’ suggestion to incorporate content about Somali and Hmong people, too.

“The Medical School really emphasizes our becoming Minnesota physicians, and while I know we can’t learn about every single population, it’s great to be able to focus in on the ones prevalent in our state,” he says.

Moe has embraced the Medical School’s Minnesota-first mission and plans to pursue practice in the state, ideally in a small town like the one where he grew up.

“I want to be in Minnesota,” he says. “I think you can bring an added level of care and understanding if you’re from a rural community yourself.”

It’s crucial for health professionals to speak up and get involved in the tough conversations on disparities and discrimination in our nation, especially because it directly impacts patients’ health and well-being every day.

He’s already putting his ideas into practice, too. During his first-year and second-year clinical course, Moe happened to be placed with a family doctor at the hospital in his hometown of Montevideo, Minnesota.

When he has the opportunity to interact with patients, he strives to get to know them beyond their medical conditions.

“I try to touch on everything and make each patient feel comfortable,” Moe says. “I ask about their health, but I also ask, ‘How are you doing in general? Is there anything else you want to talk about?’ And suddenly, all this other stuff comes out. I have talked to some patients for almost a half an hour about other things going on in their lives. Sometimes, it was information that their provider had never heard before.”

Moe’s medical school experience has been bolstered by support from the Avera Marshall Regional Medical Center Scholarship Fund, which benefits students who are from the southwest part of the state.

“Having that scholarship is just a big sense of relief,” he says. “You kind of have those initial nerves, like, ‘Do I really belong here? Is this going to work out? What am I doing?’ When I received the scholarship, I remember feeling much more at ease about going through medical school knowing that I had this additional support.”

His personal and academic experiences have put him on a path to realize the future he sees so clearly. And while he knows that fostering truly inclusive health care is an ambitious goal, Moe is confident he will be able to make a difference.

“I don’t know how much a single person can change things, but I think it would mean a lot to the community if a doctor was vocal about creating safe spaces for all vulnerable people,” he says. “Doctors have a powerful platform to advocate for patients both in and outside of the clinic. It’s crucial for health professionals to speak up and get involved in the tough conversations on disparities and discrimination in our nation, especially because it directly impacts patients’ health and well-being every day.”

To learn how your gift can support students at the Medical School, Duluth Campus, please contact Elizabeth Simonson of the University of Minnesota Foundation at esimonso@umn.edu or 218-726-6876.

A mentoring program in North Minneapolis helps kids and teens picture themselves in health careers.