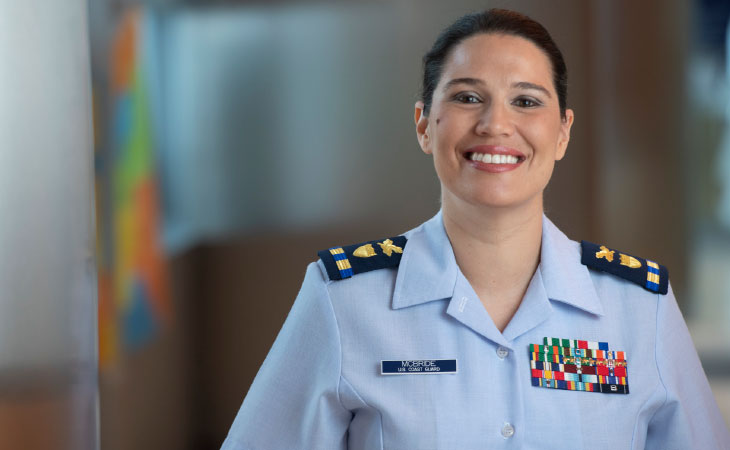 Terri McBride grew up in San Antonio, Texas, but she always dreamed of traveling the world. So in 1999, after joining the U.S. Coast Guard as an active-duty member, she was excited to accept a post as a boat crewman and watchstander on Long Island in New York.

Her duties were rigorous.

“It was a hard job,” McBride recalls. “We cleaned the boats. We sanded and painted the boats. Our 24-hour watch days alternated with 9-to-5 workdays.”

Plus, she learned a lot about discipline. In some ways, you might say, it was perfect preparation for the challenges of medical school.

From sea to school

For McBride, joining the Coast Guard was a means to end. She had grown up in a poor community and, after graduating high school, decided to pursue a degree, becoming the first in her family to attend college. But she soon found that balancing her studies with a full-time job was difficult.

“The hours that I needed to work as a waitress to make rent and pay tuition interfered with the time I needed for classes and homework,” McBride says.

She quit school and enlisted with the Coast Guard, eventually intending to take advantage of the GI Bill to finance her education. “The Coast Guard sounded attractive to me because their missions are not combat-oriented,” McBride says. “They’re involved with search and rescue. They help protect the environment. Those things are in line with my values.”

She also got to travel the world — visiting Alaska, Mexico, Indonesia, Thailand, and many other places — as part of the job.

In 2009, McBride left active duty and began work on a bachelor’s degree in nutrition science/dietetics at San Jose State University in California. She had been trained as a cook during her time in the Coast Guard, but academia introduced her to the science of nutrition — and it fascinated her.

She changed her major to biology and shortly thereafter was recruited into the Maximizing Access to Research Careers (MARC) and Research Training Initiative for Student Enhancement (RISE) programs, which give students from minority backgrounds research experience and mentor them toward careers in research.

Among other things, the program supported her attendance at a science conference where she presented a poster that caught the attention of Casey Dorr, Ph.D., a U of M graduate who is now an assistant professor in the Medical School and a researcher at Hennepin Healthcare Research Institute. That connection ultimately brought McBride to Minnesota for medical school.

And she’s still happy about her choice. “The administration has really been reaching out to students, getting feedback, and implementing it,” notes McBride, who is now in her third year of medical school. “They’ve reduced the lecture hours, which sounds like a minor thing, but it’s huge for medical students, who can get really burned out.

“I’m also impressed by how open-minded the faculty are as far as things that they incorporate into their curriculum. We’ve had a curriculum about race and medicine that I thought was very helpful. Faculty have brought in LGBT and trans-gender community [members], and they talk about things that you wouldn’t necessarily think of in the health care setting.”

McBride has also benefited from financial support through medical school, including from the Alpha Epsilon Iota Endowment Fund, which supports diversity in the student body.

“Being an independent student, every dollar counts for me,” she says. “Especially when I started medical school, I had so much debt just from all the testing fees, tutoring fees, traveling.”

McBride still serves in the Coast Guard reserves as a finance and supply chief warrant officer and spends a good portion of her breaks from medical school at the USCG Base Detachment St. Louis. She is currently thinking about a career in forensic psychiatry — a path that often involves working in the legal system with people who have mental illnesses and with other underserved populations.

“I’ve always wanted to serve the underserved because of my background,” she says. “I have a natural empathy toward what some people may consider ‘hopeless’ patients due to their lack of medical compliance and self-harming behaviors, because I have experienced the same frustrations with many of my family members.

“Looking back, I can see that when people in our family or neighborhood got sick, they didn’t get top-notch care because of our financial status. I want to serve those people.”

To make a scholarship gift or to learn more, please contact Carrie Albers with the University of Minnesota Foundation at albersc@umn.edu or 612-626-8481

Want to stay connected with the Medical School and University? Here’s how.