Fifty years after the first Surgeon General’s Report on Smoking and Health, the tide has turned — but work remains

In 1964, you could pick up a pack of cigarettes for around 30 cents, stroll into a movie theater, and light up as you watched Mary Poppins. You could blow smoke rings over the produce while you shopped for groceries, chain smoke on planes, even inhale unfiltered Camels in your hospital bed after heart surgery. And you were in good company while you did it: almost 43 percent of Americans were right there smoking with you.

But on a Saturday morning in January of that year, U.S. Surgeon General Luther Terry walked into a press conference and announced that cigarettes were hazardous to your health. He didn’t beat around the bush: If you smoked, he said, you faced a 70 percent higher risk of death.

That press conference was the public face of the landmark 1964 Surgeon General’s Report on Smoking and Health, a report the New York Timespromptly called “bold and devastating.” Now widely considered to be one of the most important public health achievements of our time, that report triggered a sea change that would alter smoking’s place in our culture.

In 1962, the University of Minnesota’s head of epidemiology, Leonard Schuman, M.D., was one of 10 scientists asked to serve on the Surgeon General’s Advisory Committee on Smoking and Health. Since then, countless University scientists have followed in his footsteps with research that has led to new understanding of how smoking causes disease, how to treat it, and how to help people stop smoking.

Stephen Hecht, Ph.D., Wallin Land-Grant Professor of Cancer Prevention and a member of the Masonic Cancer Center, University of Minnesota, has been at the center of tobacco research since the early ’70s. He helped identify many tobacco carcinogens, including the tobacco-specific nitrosomines, which form during the tobacco-curing process and are considered to be some of the most egregious cancer-causing agents.

Since the Surgeon General’s report, Hecht says, smoking has declined to about 18 percent of the population. “And lung cancer mortality started to decrease in the mid-’90s, which was completely due to fewer people smoking,” he adds.

Despite important scientific advances, Hecht cautions, smoking remains a leading cause of death: Lung cancer is still the No. 1 cancer killer, accounting for some 150,000 deaths per year in the United States, almost 90 percent of them smoking-related.

“People don’t realize that, unless it’s caught early — which it rarely is — lung cancer is incurable,” says Hecht. “The average five-year survival rate is still about 15 percent, just where it was in the 1950s. So some of the most important progress we’ve made is in convincing people to stop smoking. That’s where the experts on addiction come in.”

The tough road to quitting

Dorothy Hatsukami, Ph.D., is one of those experts. Internationally recognized for her work on nicotine addiction and tobacco cessation, she wears many hats at the U, serving as associate director of cancer prevention and control for the Masonic Cancer Center, Forster Family Chair in Cancer Prevention, and director of the Tobacco Research Programs, among other roles.

“Our team here in the early ’80s was one of the key groups that helped to characterize physical addiction to tobacco,” she explains. “And once we knew that, we could begin to figure out what medications could be used to help people stop smoking.”

In the early ’80s, Hatsukami’s colleague Harry Lando, Ph.D., a professor in the School of Public Health, was among the first to develop behavioral treatments to help smokers quit. Later, nicotine gum and patches came on the market.

“Now teams here are working on anti-nicotine vaccines that create antibodies that target the nicotine molecule so the smoker doesn’t experience the positive effects of nicotine,” says Hatsukami. “Our endgame for tobacco control would be to get rid of the use of all cigarettes and other combustible tobacco products by developing more effective treatments and policies, such as reducing levels of nicotine in cigarettes to nonaddictive levels.” 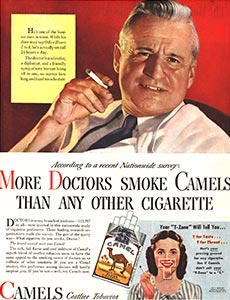 “We’ve made significant progress in 50 years,” says Kola Okuyemi, M.D., director of the U’s Program in Health Disparities Research. “The norm has changed; smoking has become socially undesirable. But tobacco is still a big problem in a number of vulnerable groups like Native Americans, the homeless, LGBT youth, and people in poverty.”

A snapshot of events that followed in the wake of the ’64 Surgeon General’s report show just how comprehensive that progress has been. First came warning labels on cigarette packs (1965); followed by a TV and radio cigarette advertising ban (1971); Minnesota’s landmark Indoor Clean Air Act, the first in the nation (1975); and a slew of smoking bans, including on airplanes (1988), in hospitals (1993), and in bars and restaurants (Minnesota’s was passed in 2007). Today in Minnesota, sin taxes have caused the cost of premium cigarette brands to skyrocket to more than $10 per pack.

“I’m very proud of the U and the work so many gifted scientists here have generated that has, and will potentially be, translated into public programs and policies,” says Hatsukami. “But in the course of our research, we see a lot of smokers who struggle with their addiction to cigarettes, and the medical morbidity we see, particularly in the lower socioeconomic groups, is very disconcerting. We still have a lot of work to do.”