A spectrum of expertise

From large prevalence studies to brain imaging, the University is investigating the best ways to serve children who have autism spectrum disorder
By Greg Breining

Patricia Pacheco was surprised that her infant son, Thomas, didn’t seem to notice her.

“All the books I had read said you should be staring lovingly into your infant’s eyes and he should look at you,” says Pacheco. “Well, he never looked at me. He was my first son, so I really didn’t have a concept of what was normal and what wasn’t. I would try to look at him and engage him, and he just never looked at me.”

And, unlike most other kids, Thomas was content to sit by himself with a single toy. “I just thought I had a really good baby,” says Pacheco. By age 1, Thomas wasn’t saying any words.

Friends assured Pacheco that boys develop slowly. Even her doctor suggested she wait for a speech evaluation. When Pacheco did schedule a full evaluation at 22 months, Thomas was found to have global developmental delays that fit on the autism spectrum.

The diagnosis opened the gate to insurance and intervention to help Thomas advance physically and socially. After a year, he was speaking in four- to five-word phrases, and his daily “meltdowns” of frustration abated.

Says Pacheco of the treatment, “We wouldn’t have the son we have today without it.” 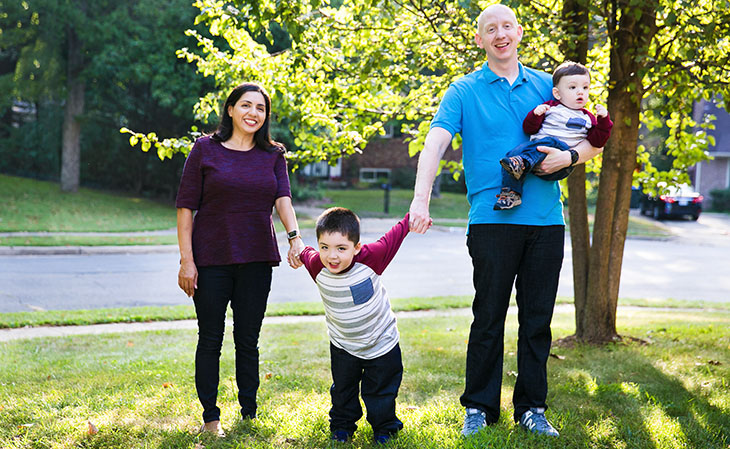 The Pachecos’ experience underscores the importance of early diagnosis of the conditions known as autism spectrum disorder. The average age of children diagnosed with autism ranges from 4 to 5 years. That represents more than two years of missed opportunity — because early treatment can pay big dividends.

“We know from intervention studies that the earlier you intervene, the better the outcome,” says Jason Wolff, Ph.D., an assistant professor in educational psychology at the University of Minnesota. “If we can identify presymptomatic markers of children who are at the highest risk, we could do more preventive interventions so that these children, hopefully, never fall behind, or at least have the maximum chance to gain the skills they’ll need to be successful.”

Wolff and other University of Minnesota researchers are trying to better understand the causes of autism spectrum disorder — to diagnose it at earlier stages when treatment is more effective and to anticipate needs for therapy and support in the larger community.

We know that the earlier you intervene, the better the outcome. If we can identify presymptomatic markers of children who are at the highest risk, we could do more preventive interventions.

Their work is contributing to a national effort to understand this complex array of developmental disorders — and establishing the University as a trusted research resource.

“We are relatively new in our ability to do this level of work,” says Suma Jacob, M.D., Ph.D., a physician-scientist in the Medical School’s departments of Psychiatry and Pediatrics, who was recruited four years ago. “I chose to come to Minnesota … because I saw Minnesota had certain strengths. It has a good education system, good medical care, it’s very community focused. I think it can become a leading center in autism nationally. The research can make differences in individuals’ lives.”

Igniting a broad search for answers

Autism spectrum disorder includes a range of neurodevelopmental disorders that appear in early childhood, mostly among boys. Symptoms and levels of disability vary widely. Repetitive actions and limited interests are common. Social interaction and communication can be particularly difficult. The Centers for Disease Control and Prevention (CDC) estimates that 1 in 68 children has some form of autism.

Scientists understand that genetics play a strong role. Studies of identical twins show that if one twin has autism spectrum disorder, the other twin has a high probability of having it, too. Finding the responsible genes would help scientists understand the cause. It would also allow very early diagnosis. But identifying those genes has been tough. 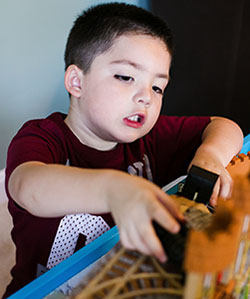 “Because it’s very heterogeneous — it’s a broad spectrum — there is no single gene or single cause,” Jacob says. “There are over 100 genes probably, and that has led to the challenge in finding [answers].”

To identify those genes and more fully understand who will show signs of autism spectrum disorder and why, scientists will have to study tens of thousands of patients. And that’s where SPARK comes in.

SPARK — which stands for Simons Foundation Powering Autism Research for Knowledge — is a nationwide collaborative study that will include 50,000 individuals with autism spectrum disorder and their families. Funded by the Simons Foundation, the study will collect personal information and DNA from saliva and mouth cells for genetic analysis. Recruiting such a large cohort is expected to take three years.

The University of Minnesota is one of more than 20 U.S. medical schools and research centers that launched the effort this spring. Jacob is the lead investigator for the University, which will be a regional hub for SPARK.

SPARK is a nationwide collaborative study that will include 50,000 individuals with autism spectrum disorder and their families. It is the largest autism project ever planned.

“We’ve learned that we need large numbers in order to tease out common causes within subgroups of autism. You can’t do that as one institution. You really need to join forces.”

“It is the largest autism project ever planned,” says Jacob. “We’ve learned that we need large numbers in order to tease out common causes within subgroups of autism. You can’t do that as one institution. You really need to join forces.

“We applied for the [SPARK] grant through the University of Minnesota, but I really see it as a collaborative force with a growing group of faculty interested in autism,” she adds. “We have colleagues and collaborators at Mayo Clinic, in Duluth, and in other states who are excited about sharing resources and opportunities with families.”

The U group plans to reach out to families in the Dakotas, Wisconsin, and Iowa as well. “I think the SPARK initiative is a unique opportunity for Minnesota to collaborate at a national level,” Jacob says. “And that’s exciting.” 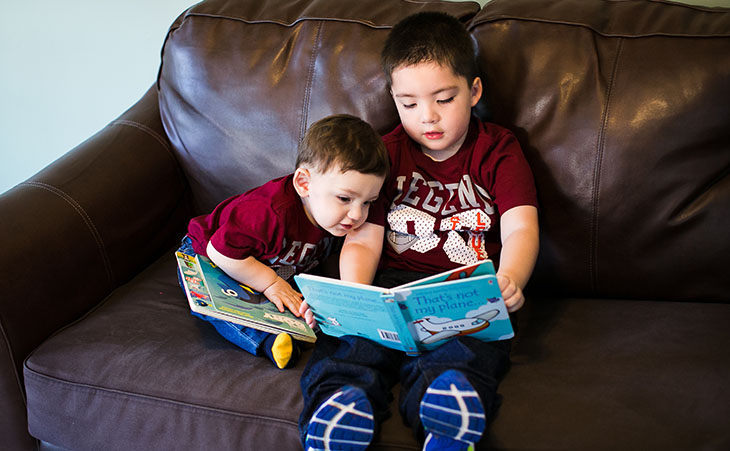 Knowing that autism spectrum disorder was more common among siblings, Patricia Pacheco was thrilled to see a recruitment flier for the Infant Brain Imaging Study. Her second son, Michael, was 3 months old at the time, just the right age to begin the study.

Wolff and Jed Elison, Ph.D., began studying young children and families affected by autism spectrum disorder as part of the Infant Brain Imaging Study when they worked together at the University of North Carolina. Now both are part of the U’s interdisciplinary Center for Neurobehavioral Development, and Minnesota is part of the Infant Brain Imaging Study, a National Institutes of Health Autism Center of Excellence Network that includes eight universities in the United States and Canada.

The study employs magnetic resonance imaging (MRI) scans to detect physiological differences between typically developing brains and the brains of children who have autism spectrum disorder. Pacheco brought young Michael in for a developmental assessment, an eye-tracking test, and MRI scan of his brain while he was sleeping.

Finally, a third type of MRI, functional MRI, detects brain activity patterns related to blood oxygen, being that cerebral blood flow is tied to neuron activity. “We’re interested in which regions of the brain fire together while the child is resting,” says Wolff. “We can use this to understand more about functional development.”

The upshot is that Wolff and colleagues are detecting objective differences in the brains of children who have autism spectrum disorders as early as 6 months of age. 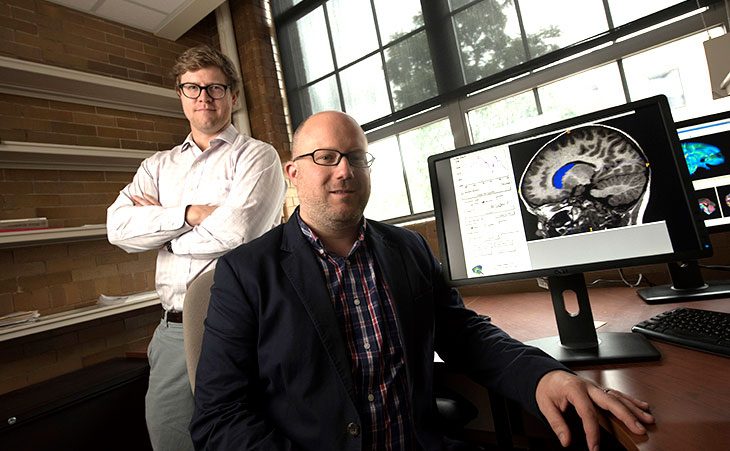 “With our best behavioral tools, we can feasibly diagnose a child around 18 months or 2 years,” says Wolff.

Earlier detection can make a big difference for families, says Patricia Pacheco. “I think it’s just a great program because we have been able to track Michael’s progress from just 3 months old to know that so far he seems to be neurotypical.” Michael got another scan at 6 months and will go back at years 1 and 2. “They give us information as we go,” she says.

Elison, a McKnight Land Grant Professor, also was named a coinvestigator for the new Baby Connectome Project, a $4 million NIH effort focused on imaging developing brains from infancy through early childhood. He will lead the effort at the U with Kamil Ugurbil, Ph.D., director of the U’s world-renowned Center for Magnetic Resonance Research.

The need to dig deeper 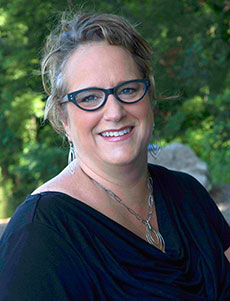 Amy Hewitt, Ph.D., is investigating why Somali kids diagnosed with autism spectrum disorder were more likely than white kids also to have been diagnosed with an intellectual disability. (Photo: Amy Metry)

University researchers were tapped to contribute to the ADDM network after a 2013 report done in conjunction with the Minnesota Department of Health revealed that Somali and white children ages 7 to 9 living in Minneapolis were about equally likely to have autism spectrum disorder — but the Somali kids were more likely to also have an intellectual disability.

“The honest answer is we don’t know why,” says lead author Amy Hewitt, Ph.D., director of the University’s Research and Training Center on Community Living. “It’s the big question that came out of our Somali prevalence study. What it tells us is we just need to dig deeper.”

Cultural factors could certainly be at play, Hewitt explains. Because autism is a spectrum of disorders, it would make sense that Somali children would fall along the entire spectrum and not just on the severe end, she says. “So one thought is that we are missing those kids whose symptoms are not as significant.”

Hewitt’s group is also building on its earlier study to determine the prevalence of autism in Somali and Hmong communities throughout Hennepin and Ramsey counties. The CDC is funding the research as part of the ADDM network, and the University’s findings will become part of the nationwide database.

Prevalence data lets us plan for services in a much better way.

“What prevalence data does for us is let us plan for services in a much better way,” says Hewitt. “[In Minnesota], most kids aren’t diagnosed until the age of 5. Well, we can accurately diagnose autism in kids at 2.”

That gap, she says, spans critical years for getting intensive services to those children. “The ADDM network is there not just to count and report the number of kids,” says Hewitt. “It’s there to provide data and trends that help us to improve services and support to kids.”

Could addiction research shed light on autism? Possibly so, says University of Minnesota neuroscientist Patrick Rothwell, Ph.D., because the same area of the brain appears to be problematic in both disorders.

“Imagine the brain as an orchestra, with all of the cells working together,” he says. “You might hear a problem in, say, the strings section. But then you have to break it down further, to the cellos, the violas, the violins, to find out which is out of tune.”

Rothwell has pinpointed a particular group of malfunctioning synaptic connections — say, the violins — in the brain’s striatum that he believes plays a role in autism; now he wants to pluck each string to find the discordant notes.

He’s doing this using optogenetics, a relatively new technology that uses light to probe the inner workings of the brain to study — and even control — pinpointed regions. Because addiction research in general is further along, Rothwell says he’s applying that knowledge, where indicated, to his autism investigations.

“My previous work got us to the violins,” he explains. “Now, using optogenetics, we’re looking closer in hopes of being able to ‘tune’ those cells, to restore healthy function.” 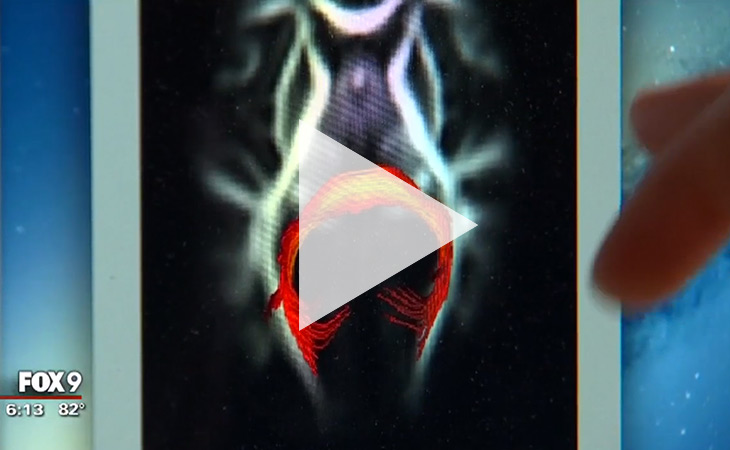 The U received two new research grants that could lead to earlier, more accurate diagnosis of autism spectrum disorder.