In December 2017, Kamil Ugurbil, Ph.D., and his team at the University of Minnesota’s Center for Magnetic Resonance Research (CMRR) produced the world’s first MRI of the human body at 10.5 Tesla — a magnetic field strength 3.5 to 10 times greater than today’s standard clinical MRIs.

In the early years of MRI, four decades ago, magnetic fields higher than approximately 0.25 Tesla were thought to be difficult and suboptimal. Even when 1.5 Tesla was proven feasible, many scientists thought the technology would top out there.

Not Ugurbil, who in May will receive the 2019 Institute of Electrical and Electronics Engineers Medal for Innovations in Healthcare Technology for his groundbreaking imaging research. We caught up with Ugurbil recently and asked him to reflect on the advancements he’s seen — and pioneered — over the years. 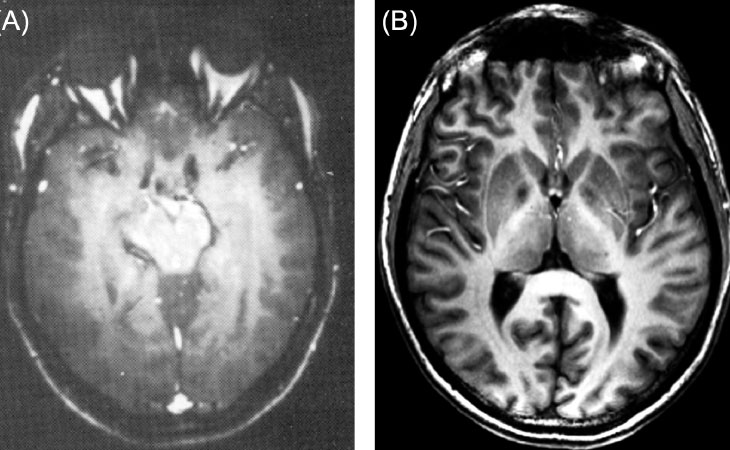 Proof that scientists can make the difference: These are early 4 Tesla MR images taken by the manufacturer, at left, and the CMRR, at right. (image: Courtesy of Kamil Ugurbil, Ph.D.)

MB: What made you think that high-field human imaging was possible when others said it wasn’t?

Ugurbil: Before I came to academia, I worked at Bell Labs in New Jersey, where we pioneered the use of nuclear magnetic resonance to study metabolism inside a living cell, demonstrating the ability to detect metabolites in vivo for the first time. We used very high magnetic fields, albeit in small samples, with magnets typically used by chemists and biochemists. But we were always thinking, “Wouldn’t it be nice to develop this technology to apply to humans?”

Difficulties predicted for human imaging were based on simulations and theoretical considerations that were not experimentally proven. Magnetic resonance techniques are extremely dynamic, extremely versatile. There was no reason to think that someday we wouldn’t be able to apply them to humans.

MB: Tell us about your first foray into human high-field imaging.

Ugurbil: We were lucky that, in the mid-1980s, the U was looking to invest in some new areas and solicited ideas from the faculty, analogous to what the Medical Discovery Teams program [a state-funded Medical School initiative] looks like today. We applied for and got that funding. That’s how we got the 4 Tesla scanner.

Before the magnet came to Minnesota, Michael Garwood, Ph.D., from CMRR already showed that, contrary to expectations, one can get excellent anatomical images of the human brain at 4 Tesla.

After the system arrived in Minnesota, the first thing we attempted was functional brain imaging, which was successful. That was not only one of the first applications of human imaging on the 4 Tesla magnetic field, but also a new discovery — one that could actually image brain activity. This was a major development, a revolution.

MB: Then you started working on the 7 Tesla technology, which you literally built from the ground up.

Ugurbil: Today, the 7 Tesla is an instrument you can buy. It wasn’t when we started. We were the first in the world to put it together. The 7 Tesla is now FDA-approved for clinical diagnosis and is really the most advanced platform for human imaging that exists.

MB: Which of the CMRR’s achievements are you most proud of?

We used to be the only ones doing this type of research. Today it’s a burgeoning research area.

So a lot to be proud of, I guess! It’s a good way to start my day, talking about this!

Contact Nicholas Hoekstra at nhoekstr@umn.edu or 612-624-2117 to find out how your support can make a difference at the Center for Magnetic Resonance Research.

Kamil Ugurbil, Ph.D., arrives at the University of Minnesota and starts his laboratory (initially located on Lake Minnetonka) focused on using magnetic resonance technology that would eventually evolve into the Center for Magnetic Resonance Research (CMRR) on the Twin Cities campus.

CMRR produces the world’s first high-contrast, high-resolution images of the human brain at high magnetic fields (4 Tesla and above).

CMRR introduces functional brain imaging for the first time, together with independent and concurrent work by investigators from Massachusetts General Hospital, showing neuronal activity in the human brain.

CMRR is first in the world to demonstrate that breast tumors can be detected through high-field magnetic resonance imaging and spectroscopy.

CMRR moves to its new home, a 36,000-square-foot facility in the University’s then-new Biomedical Discovery District.

16.4 Tesla scanner arrives at the U for animal studies.

CMRR is named a coleader of the National Institutes of Health’s Human Connectome Project (HCP), the most ambitious brain imaging study conducted to date; CMRR develops all image acquisition and reconstruction techniques employed in the HCP and its subsequent follow-up grants.

BRAIN Initiative launches, with many studies using imaging expertise developed at the CMRR.

CMRR produces the first-ever 10.5 Tesla image of the human body.

A powerful magnetic field and radio waves generate signals from hydrogen atoms in the body. Those signals are detected by a radio antenna and then translated by a computer into clear, 3D images of the scanned area.