Sunlight is peeking through the window on the third floor of University of Minnesota Masonic Children’s Hospital, where twin sisters Paisleigh and Paislyn Martinez are lying face to face, holding one another in an embrace. As they stir, they kick their feet  —  one twin with toenails painted pink, the other blue.

It’s mid-May, and the 3-month-old twins, who were born conjoined, are quickly approaching the big day: separation.

The rare surgery will be complex: Identified medically as thoraco-omphalopagus conjoined twins, Paisleigh and Paislyn are connected from their chests to their belly buttons, their livers fused in the middle and their hearts entwined.

“There have been so many ‘what ifs’ and situations where we were told they might not make it,” says the girls’ mom, Paris Bryan. “They’ve overcome so much already at such a young age.”

“I still get emotional thinking of it,” says their dad, Ernesto Martinez.

On May 25, 2017, more than 40 surgeons, nurses, and other medical experts filled the University of Minnesota Masonic Children’s Hospital operating room. Each baby had her own color-coded medical team that matched her toenail polish: blue surgical caps for Paislyn’s team and red caps for Paisleigh’s team. The teams had spent months preparing for this moment — discussing, conducting simulations, and drawing upon the expertise of their hospital and University of Minnesota Medical School colleagues.

“Being in that operating room was pretty climactic. There were 44 people, I think. And everyone had a job. There were no bystanders,” says pediatric cardiologist Matthew Ambrose, M.D., who cared for the twins before and after their delivery.

Several hours into the procedure, Anthony Azakie, M.D., chief of pediatric heart surgery at Masonic Children’s Hospital and a professor of surgery in the Medical School, opened the babies’ shared chest wall and divided their ribs. He then separated the “bridge” that connected their hearts.

“We had watched them connected for so many weeks, and now that the final separation had occurred, there was something surreal about it,” Azakie says. “The fact that using modern technology and using current surgical strategies and medical care means you can separate them and separate them safely is awe inspiring.” 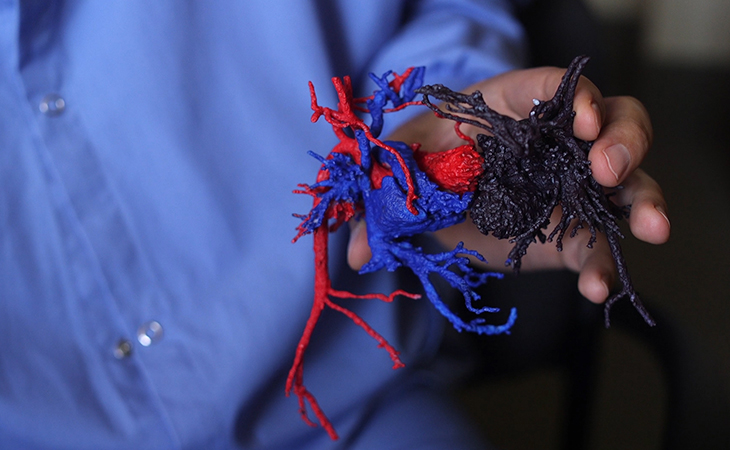 A 3-D model of the twins' hearts showed for the first time a tiny bridge connecting them — a critical finding that altered their surgical team's plan for separation. (Photo: Brian Carnell)

Conjoined twins are rare, about one in every 200,000 live births. Most surgeons won’t see a case in their lifetimes.

“The girls were an embodiment of a kind of physiology none of us had ever seen before,” says Ambrose. “The uniqueness of their situation forced us to start basic and build from there.”

The team — which included specialists in critical care, neonatology, nephrology, cardiology, and surgery — connected through weekly meetings that started before the twins were born. 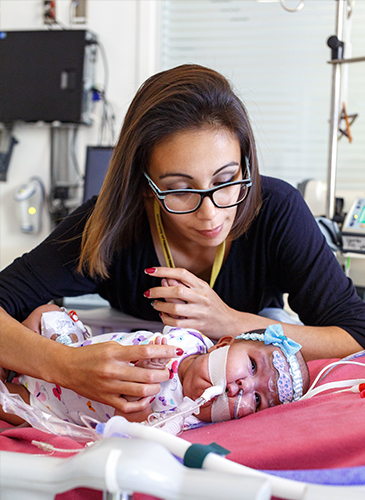 “We had to come out of our silos and literally and figuratively get everyone in the same room at the same time,” says first-year pediatric resident Timothy Rauschke, M.D., who participated as a member of the consulting pediatric kidney team.

“It was the only way to accomplish the kind of care these babies needed,” adds Ambrose. “Having a team-oriented approach filled with sharing, humbleness, and true collaboration is what allowed us to have success.”

Advanced technology developed at the U’s Earl E. Bakken Medical Devices Center came into play, too. Three-dimensional modeling and virtual imaging developed by graduate students at the center allowed Azakie and his colleagues to take a virtual tour of the girls’ organs before the surgery. The model revealed a previously unseen bridge connecting the two hearts — a critical finding that altered the surgical plan.

“The moment we recognized that physical connection between the two hearts was scary,” recalls Ambrose. “There were multiple reports of other babies with a similar connection who did not survive surgery, but I suspect that was because it wasn’t recognized before the surgery.”

The team met numerous times in the operating room to walk through the separation, planning for just about every possible scenario. After studying the 3-D models, Azakie determined that the entire layout of the operating room needed to change.

All the preparation paid off.

“The separation surgery took approximately nine hours and was orchestrated like a spectacular philharmonic score,” says Daniel Saltzman, M.D., Ph.D., chief of pediatric surgery and overall lead for the separation surgery. “Nothing was left to chance, and every contingency was planned for. There were no surprises.” 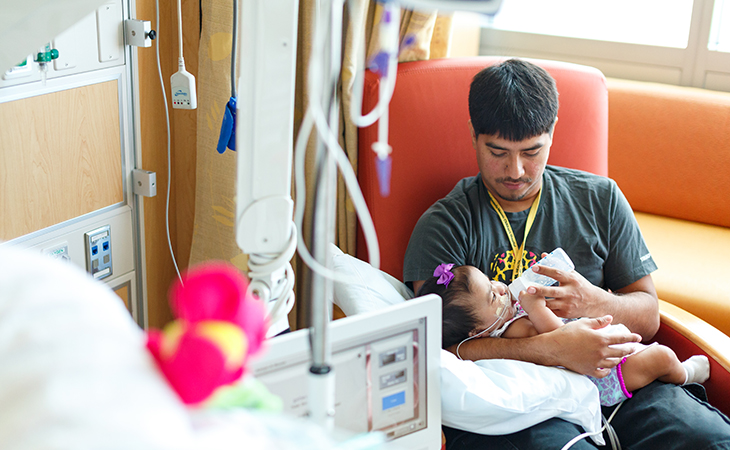 Paisleigh is being weaned off oxygen therapy and is taking all of her nutrition by mouth. (Photo: Brady Willette)

For Paislyn and Paisleigh, the surgery opened a new chapter — recovery. Paislyn, who was born with serious heart conditions, tricuspid atresia with transposition of the great vessels and a ventricular septal defect, underwent a procedure called pulmonary artery banding of the heart immediately after separation — one of several operations she will undergo in her lifetime.

Before their separation, Paisleigh was helping to keep Paislyn alive, her body essentially acting as a heart, lung, and dialysis machine for her sister. Although she was born with a stronger “normal” heart, Paisleigh struggled after the separation surgery.

“Because her heart had been used to doing so much work for so long, she didn’t tolerate changes in her lung function very well,” says Caroline George, M.D., a critical care physician in the hospital’s intensive care unit. Fortunately, once Paisleigh’s heart got used to functioning on its own and recovered from the separation, her health improved rapidly, George says.

For both girls, growth and development are now priorities. Because of how they were connected, facing each other, their ribcages are misshapen, and their chest walls will eventually have to be reconstructed, possibly as late as a year from now.

“I’ve never personally taken care of conjoined twins before, but I have definitely taken care of babies born with chest wall deformities or deformities of their abdominal wall,” says George, who is also an associate professor of pediatrics in the Medical School. “It’s not exactly the same, but they have common problems.” 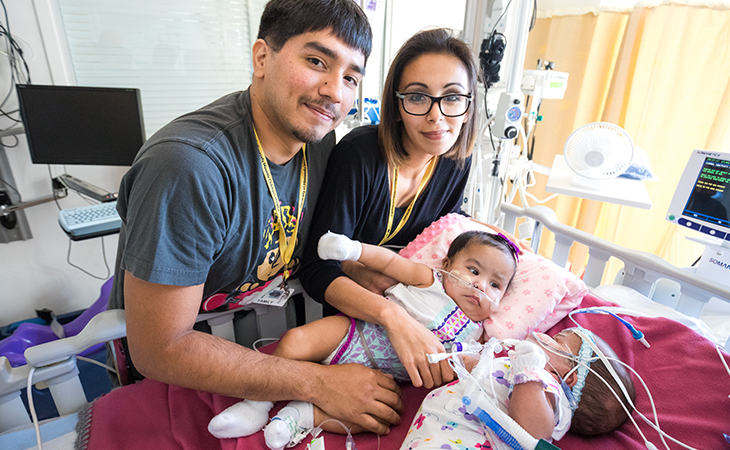 With Paisleigh and Paislyn having such different care needs, parents Ernesto Martinez and Paris Bryan cherish the moments they can spend with the girls together. (Photo: Brady Willette)

A reconfigured team — which includes such specialists as a nutritionist, a pharmacist, nurses, and surgeons — still meets regularly to discuss the girls’ progress. Meanwhile, as the twins’ bodies recover and develop, their personalities have started to emerge.

“Paisleigh’s more of the chill person and just loves to watch people and see what everyone is doing,” says her mom. “Paislyn can be shy sometimes, but she loves attention! She is really sassy.”

After spending their early months entwined, Paislyn and Paisleigh are now recovering in separate rooms. During her frequent visits, their mother usually stops first at Paislyn’s room in the cardiovascular intensive care unit, where specialists are managing her heart condition.  Paislyn is working hard on getting off the breathing tube. Although she’s growing bigger and stronger, doctors expect her to remain in the hospital for several more months.

Paisleigh’s room is a couple of floors up, on the general floor, where her care team is weaning her off oxygen. If her health stays on track, her doctors say, she may be able to go home next month.

“Play dates” are an important element of the twins’ recovery, too, and as often as they can, nurses take Paisleigh out of her crib and put her in a little wagon to visit her sister.

“It’s a blessing to see my girls getting bigger every day,” says Bryan. “We can’t wait for when they come home.” 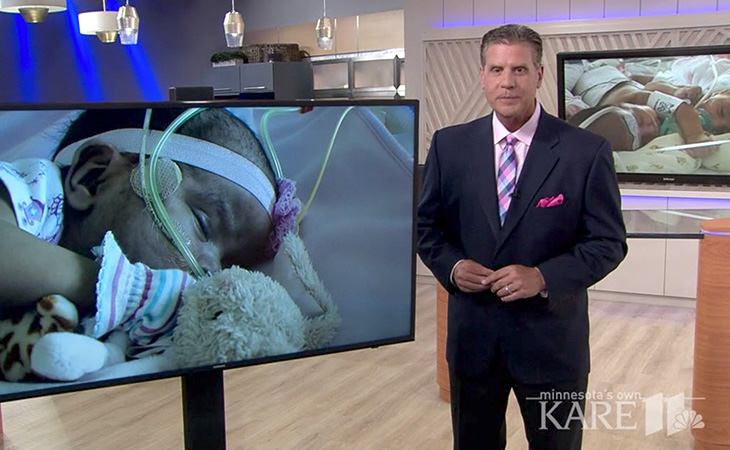 Watch a video about how the care team meticulously prepared for the separation surgery.

Before separating 3-month-old conjoined twins Paisleigh and Paislyn Martinez last May, U of M doctors discovered they had to perform a medical first.

Paislyn had become very ill. Her doctors knew already that she had serious heart conditions, tricuspid atresia with transposition of the great vessels and a ventricular septal defect. When they noticed a drop in her blood pressure and changes in her urine output, they called in pediatric cardiologist and Medical School assistant professor Gurumurthy Hiremath, M.D.

Because of Paislyn’s form of congenital heart disease, she needed to have a hole between the two upper chambers of her heart if she was to survive the separation surgery. But the hole in the septum of her heart had become too small and needed to be enlarged through cardiac catheterization.

“We were in uncharted territory,” says Hiremath. “There had been no report of a transcatheter intervention of any kind being performed in conjoined twins before separation.”

Despite several challenges, Hiremath was able to complete the procedure. He inserted balloon catheters into Paislyn’s heart through the femoral vein (a major blood vessel in the leg) and expanded the balloons across her septum, enlarging the hole and stabilizing her heart for surgery.

“We all worked so smoothly, effectively, and efficiently. It did not feel like it was our first time,” says Hiremath. “The whole experience was planned and executed to perfection.”

University of Minnesota Masonic Children’s Hospital became home for Paislyn and Paisleigh Martinez before they were born. A routine ultrasound revealed that the twins were conjoined, and their mother, Paris Bryan, was quickly referred to the University of Minnesota Health Maternal-Fetal Medicine Center, which cares for women experiencing complex pregnancies.

Bryan put her trust in The Birthplace care team and Katherine Jacobs, D.O., who specializes in high-risk pregnancies. The collection of sonographers, nurses, care coordinators, surgeons, and physicians cared for Bryan and closely monitored the girls’ growth and development.

They also outlined every detail of the delivery, and then practiced during an obstetric simulation on February 10. Delivery was slated for a month later, but Paisleigh and Paislyn had other plans and were born that same day at 34 weeks exactly.

“It worked out perfectly to have run through the birth scenario just prior to the real event,” says Jacobs.